The Malady of Writing

A project on text and speculative imagination. 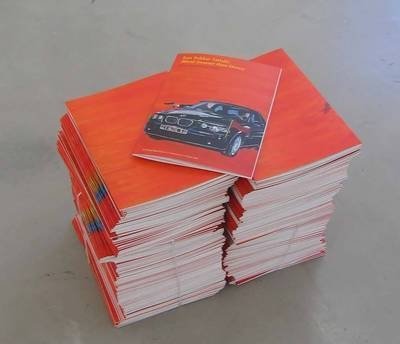 The Malady of Writing is a unique library composed by a collection of books, pamphlets, ephemera and single pages written by artists.

While traditionally a distinction is made between art books and theoretical, critical or biographical texts written by artists, this exhibition deals with artist's fictional text: academic fiction, literary fiction, political fiction and poetic fiction. Books that are written, produced and often self-published by artists, these works are a different sort of novel and fiction – works that are unlikely to be successful in the literary world. Instead, they were written out of necessity or compulsion: this is the malady of writing.

The circuits of distribution determine the presence of books in the places where one regularly goes to buy a novel. The projects included in The Malady of Writing have been made possible because the artists themselves, small or independent publishers or art institutions decided to publish them. Being printed in a limited number of copies and distributed in a great variety of contexts, such literary projects live on the border of – or in parallel to – the major publishing houses and the system of specialised literary agents. Many of the works have achieved cult status or are in high demand in the artistic community. Hence the reader of these texts engages in an exercise of re-writing and re-inventing language that is directly related to the economies of artistic production.

Though there are opening and closing dates for the project, which will be presented at the MACBA Documentation Centre, its public presentation is just the beginning. This is just the first step to introducing the volumes that we have collected to date: more than 130 works by 48 international artists. The project is the result of a year of research, and it will continue to grow as more texts are found.

The library is not organised by subject: it would be nearly impossible to implement that sort of organisation without inventing Borges-like categories. The books are distributed within the space so as to allow each visitor to discover the best way to relate to the individual works.

The Malady of Writing is evidence of the MACBA's growing interest in writing. This interest is shared by the museum's Programme of Independent Studies, which in 2010 will host debates and workshops aimed at examining the status of criticism and the exercises of radical imagination that initiatives such as this exhibition involve.

The show includes three works produced specifically for this first presentation: El mundo explicado by Erick Beltrán, a Mexican artist living in Barcelona; the text Pourquoi Malady? by the Danish artist Jørgen Michaelsen, and 100 cartas by the Barcelona based artists David Bestué and Marc Vives.

ACTIVITIES RELATED TO THE EXHIBITION.

Thursday 3 December 2009 at 7:30 pm
Screening and Debate
Helvetica, Gary Hustwit, 2007, 80 min
Screening organised in conjunction with Disseny Hub Barcelona (DHUB) as part of the exhibition Helvetica. A new typeface? that will be on view from 1 December 2009 to 7 February 2010 at DHUB Montcada (Montcada, 12).

23–26 February 2010 from 4:00–8:00 pm
Workshop with Mariana Castillo Deball and Irene Kopelman
Aimed at young artists and/or art students.
Registration period: Applicants must submit a CV and a letter of interest to programespublics@macba.cat, from 25 January–12 February 2010.
The workshop will be held in Spanish.