Picturing New York at the Irish Museum of Modern Art

The exhibition reflects photographers' ongoing fascination with New York, a city whose vitality, energy, dynamism and sheer beauty have also inspired innumerable artists, writers, filmmakers and composers. Presenting the work of some 40 photographers including such influential figures as Berenice Abbott, Diane Arbus, Garry Winogrand, Lisette Model, Alfred Stieglitz and Cindy Sherman, the exhibition features both the city and its inhabitants, from its vast, overwhelming architecture to the extraordinary diversity of its people. 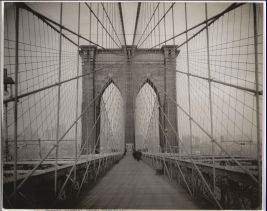 An exhibition of 145 masterworks from the photographic collection of The Museum of Modern Art (MoMA) in New York, celebrating the architecture and life of that unique city from the 1880s to the present day, opens to the public at the Irish Museum of Modern Art on Wednesday 25 November 2009. Picturing New York draws on one of the most important collections of modern and contemporary photography in the world to celebrate the long tradition of photographing New York, a tradition that continues to frame and influence our perception of the city to this day. Presenting the work of some 40 photographers including such influential figures as Berenice Abbott, Diane Arbus, Garry Winogrand, Lisette Model, Alfred Stieglitz and Cindy Sherman, the exhibition features both the city and its inhabitants, from its vast, overwhelming architecture to the extraordinary diversity of its people.

The exhibition reflects photographers’ ongoing fascination with New York, a city whose vitality, energy, dynamism and sheer beauty have also inspired innumerable artists, writers, filmmakers and composers. New York’s unique architecture is explored, from elegant skyscrapers to small shop fronts; likewise the life of its citizens, from anonymous pedestrians to celebrities and politicians. The city’s characteristic optimism is caught time and again in these images, even in those taken in difficult times. Together, they present a fascinating history of the city over more than a century, from Jacob Riis’s 1888 view of bandits on the Lower East Side to Michael Wesely’s images taken during the recent expansion at MoMA.

The photographs reveal New York as a city of contrasts and extremes through images of towering buildings and tenements, party-goers and street-dwellers, hurried groups and solitary individuals. Picturing New York suggests the symbiosis between the city’s progression from past to present and the evolution of photography as a medium and as an art form. Additionally, these photographs of New York contribute significantly to the notion that the photograph, as a work of art, is capable of constructing a sense of place and a sense of self.

“I am thrilled that Picturing New York will be presented in Dublin—a city whose vitality, grit, and vibrant artistic community resonates with that of New York,” said Sarah Meister, Curator in MoMA’s Department of Photography, who organised the exhibition. “In addition, the layout and scale of the galleries at IMMA will allow this story - of New York and photography becoming modern together throughout the twentieth century - to unfold as if chapter by chapter.”

Joe Duffy, Country Executive for Ireland, BNY Mellon, sponsors of the exhibition, added: “As the first New York bank, established back in 1784 under the leadership of Alexander Hamilton, we have a deep and abiding connection to this great city. Over the past 225 years our history has been inextricably linked to that of New York and we have seen at first hand the transformation of a city of some 30,000 inhabitants into the modern, iconic metropolis we know today. Our support of fine art and popular photography has long been a key element of our philanthropic endeavours and we are proud to support the Irish Museum of Modern Art in bringing such a marvellous exhibition to Dublin during this, our 15th year since first opening offices in this city.”

Discussion: Sarah Meister and Tod Papageorge
On Monday 23 November at 5.00pm MoMA curator Sarah Meister will introduce the exhibition Picturing New York, followed by an illustrated presentation by renowned American photographer Tod Papageorge, who will discuss key themes in his work and how they relate to specific works featured in the exhibition. The event will conclude with an open discussion. Admission is free, but booking is essential. Please book online on www.imma.ie. The lecture will take place in the Chapel at IMMA.

The exhibition is accompanied by a fully-illustrated catalogue produced by The Museum of Modern Art, which includes a foreword by Enrique Juncosa, Director, IMMA, an essay by Sarah Meister, and texts by notable New Yorkers.

Opens to the public on Wednesday 25 November 2009