The photographer works with this aesthetic approach while experimenting with new digital processing technology. He uses found photographs as a basis, such as hand-colored postcards dating from around 1900, enlarging and processing them as well as emphasizing his own choice of color tones. 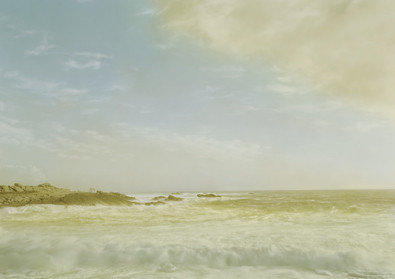 Elger Esser's photographs give us the impression that we just had a déjà vu: his magical images of river landscapes, bridges, villages, and coastlines evoke distant memories even if we have never been at even a single location where the pictures were taken. The artist, born in Stuttgart in 1967, consciously alludes to Marcel Proust by setting out, again and again, "in search of lost time" in his poetic and melancholic photographs. This also reflects in his choice of photographic techniques: His recent heliogravures, an almost forgotten technique dating from the 19th century, will be exhibited for the first time from November 28, 2009 to April 11, 2010 in the Kunstmuseum Stuttgart and, afterwards, in the Museum for Modere Kunst Arnhem. This first large overview of his oeuvre presents around 50 large-format artworks by the artist. As one of the last and youngest graduates of the renowned classes of Bernd and Hilla Becher at the Düsseldorf Kunstakademie, Elger Esser counts today as one of the most important German fine art photographers.

Just as in painting, Esser disassociates the motif from time and place and creates instead a powerful nostalgic image. Esser never modifies a detail in the event of a current reference cropping up in a picture because the static appearance of his images negates all temporal specification, imbuing them with a glimmer of eternity. In this way, Esser probes into the ambivalent nature of photography, which, from the moment of its birth, oscillates between documentation – the alleged objective copy of reality – and rendering subjective appropriation of the world.

In his invariably unsentimental images, Esser ennobles tranquil and inconspicuous locations, saving them from oblivion through his photography. He focuses on the intimate memories we all harbor in us. It is exactly this kind of intimate remembrance that Combray symbolizes in Proust's seven-volume novel "In Search of Lost Time" – a fictive location composed of pieces of scenery taken from the real town of Illiers. For the following generations it is interpreted to be the quintessential symbol of childhood memories.

It is not surprising that Esser has access to an immense collection of historical postcards of Breton and Norman coastal views, which he utilizes for his work. In comparison to what we are used today, at the beginning of the 20th century there was an astounding profusion of postcard motifs even of the smallest fishing village. The most ordinary market squares and extraordinary events alike, such as stranded whales or shipwrecks, were considered worthy for image production. In Esser's oeuvre, postcard artworks are also positioned at an interface between traditional landscape pictures and his most recent heliogravures. He selects a section out of each postcard and enlarges it in the darkroom so that the photography grain or noise is clearly visible. He then has sections of the enlargement colorized and thereby succeeds in singularly alienating the image. A new order is created that is leveled at contrasting proximity and distance when viewed.

Elger Esser is always highly conceptual in his work, which seems surprising on account of the beautiful motifs and the highly emotional impact his photographs have on viewers. His work can be divided up into several main groups. He takes his time to progress through the single stages of finding images and developing them into artworks, thereby still trusting his command of traditional, pre-digital photographic techniques. In contrast to his teachers Bernd and Hilla Becher, he did not develop a strict grid pattern, so that the affiliation between photographs only grows apparent when viewers take another look.

Last but not least, literary references are crucial for a profounder understanding of Elger Esser's oeuvre. Hence a comprehensive volume has been published to accompany the exhibition. It contains numerous illustrations and informative essays, which, for the first time, discuss the role literature – be it that of Proust, Guy de Maupassant, Cees Nooteboom, or W. G. Sebald – plays in comprehending Esser's work.