Dance in My Experience 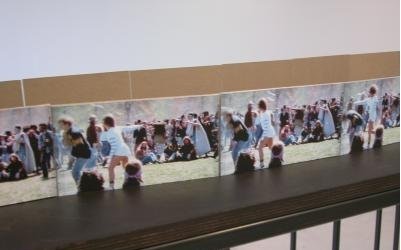 In conjunction with the Kunsthalle, the Kunstverein für die Rheinlande und Westfalen moved into the newly erected, postmodern, "brutalist" building on the Grabbeplatz in 1967. Joseph Beuys summarily demanded the immediate demolition of this building, which he despised not only for its architecture, but also because, in his view, it cultivated an elitist way of looking at art. "This building looks like a chocolate box. It doesn't invite one to come in and view art-instead, art is barricaded inside it!"

Viewed retrospectively 1967/68 marks a radical change, with implications extending far beyond the boundaries of architectural discourse. An understanding of the politics of the era not only became the subject of radical scrutiny, but art itself was also now supposed to receive a new role, extended to encapsulate society and its inherent potential for change.

The exhibition "Dance in My Experience" poses the question: what became of those often times utopian ideas from that era? The title alludes to eponymous texts written by the Brazilian artist Hélio Oiticica, in which he endeavours to outline the characteristics of a new art form in keeping with the times. Hélio Oiticica considered that the collaboration of several artists, the abolition of the audience in favour of a more comprehensive, participatory approach, the necessary avoidance of the overtly intellectual, and the search for direct forms of expression were essential. Ultimately, this would lead to a surmounting of dominant ideas and social groups, not to mention class differences, in the "lively experience of a total collective creation". Similarities between Hélio Oiticica's "Héliotropisme" and Joseph Beuys's practice are manifest.

The exhibition in the Kunstverein für die Rheinlande und Westfalen doesn't take an historical line of argument, but highlights instead recent contemporary works that look back from today's perspective to the revolutionary ideas of that time. What remains of these ideas and ideals? What can be considered to be an expression of the period and conversely, what can be regarded as timeless? Against the backdrop of this building, which still affirms the idea of the White Cube in its exhibition spaces, the discrepancy between contemporary artistic production and the impulsive attitude of that bygone era and its reformulation of fine art clearly emerges.

This is because the works and the exhibition maintain a certain distance to the era in question. Above all, the transformation of social and utopian approaches, and alternative lifestyles, into commercially viable concepts becomes a kind of corrective when compared to simple adaptations. "Dance in My Experience" thematically addresses this ambivalent relationship between an anti-establishment vision and today's view of this era, but at the same time exposes the contradictions between the desire, in those days, to develop alternative ways of living, and a contemporary society, which seems to be in a position to absorb all forms of transgression and actually market dissidence per se.

The exhibition has been developed in cooperation with curator Cristina Ricupero.

The Hungarian artist Hajnalka Tarr (b. 1977) focuses in her installations on spatial straining by inserting mirrors or assembling unusual objects in space.
She explores the possibilities of absolute capaciousness, whose physical or visual perception dissolves internal boundaries and relieves both the artist and the viewer of their fears and inner inhibitions. The sense of infinity and unlimity results out of the visual expansion of space and the particular spatial experience.
The artist works with banal, everyday objects, such as safety pins or clothes hangers, which occur to the viewer both familiar and meaningless. We know and use them in our everyday life without any feelings or any reflections. They merely gain importance – even on an aesthetic level – by structuring the space within the installation. Hajnalka Tarr creates the illusion of an endless corridor within the display window; countless empty hangers next to one of the many city’s shopping streets underline the work’s critical dimension.