Part 1: The Game and the Players. This part focuses on the stories of artists and exhibition makers in 3 shows - 'Repetition: Summer Display 1983', 'Strange and Close and Rien ne va plus' - and will close in March 2010 with the project 'If I Can't Dance... Edition III Masquerade'. Which story did the original curators want to tell and how do we perceive this part of history in our time? This 18-month programme consists of projects, performances, lectures and discussions, taking the collection of the museum as a starting point. 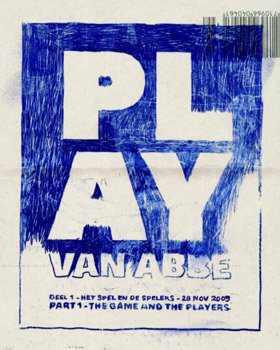 On Saturday 28 November 2009 at 16:00 the opening of Play Van Abbe takes place at the Van Abbemuseum. This 18-month programme consists of exhibitions, projects, performances, lectures and discussions, taking the collection of the Van Abbemuseum as a starting point. Play Van Abbe is subdivided into four parts, each with its own theme. Part 1, The Game and the Players, begins on Saturday 28 November 2009 and runs until March 2010.

Part 1: The Game and the Players
The first part focuses on the stories of artists and exhibition makers. Who are these 'players' within a museum and which stories do they tell? How was the collection presented in 1983 and how is this perceived in 2009? How does the current director present the collection? In what way does an art museum position itself – both in the present and in the past? These questions will be put up for discussion in three exhibitions: Repetition: Summer Display 1983, Strange and Close and Rien ne va plus. Part 1 will close in March 2010 with the project If I Can't Dance… Edition III - Masquerade.

Repetition: Summer Display 1983 is a reconstruction of a collection presentation in 1983 curated by Rudi Fuchs, the director of the Van Abbemuseum at that time, and his curators. He presented a number of new purchases in this Summer Display, including works by Georg Baselitz, Alighiero e Boetti, Daniel Buren, Luciano Fabro, Gilbert & George, Rebecca Horn, Hermann Nitsch, Sigmar Polke, Lawrence Weiner, and Ian Wilson. Repetition: Summer Display 1983 raises questions as: Which story did the original curators want to tell and how do we perceive this part of history in our time? Does the presentation in this new context become a new exhibition or a copy of an exhibition?

Current director Charles Esche curated Strange and Close, a presentation of recent purchases and other works from the collection. Esche presents a view on the history of the period after 1989, the year of the collapse of the Berlin Wall, the protests on the Tiananmen Square in China and the beginning of the end of apartheid in South-Africa. Strange and Close is a complement to Repetition: Summer Display 1983, showing the much broader geographical area that contemporary art now covers. It also signals a shift in collecting: from the autonomous art work towards an entangled variety of objects, archives, (documentary) sources and stories. The exhibition features works by Hüseyin Alptekin, Yael Bartana, Harun Farocki, Dan Flavin, Gülsün Karamustafa, Dan Peterman and Nedko Solakov.

The presentation Rien ne va plus, curated by Christiane Berndes, Diana Franssen and Steven ten Thije in collaboration with guest curators, exhibits a number of installations and projects from the museums' collection from 1966 to the present by artists who tackle social issues in an explicit dialogue with the museum context. These artists draw our attention to codes that in many cases are so self-evident that we are even no longer aware of them. Is it possible to reveal these codes? The exhibition contains works by Marcel Broodthaers, Chto Delat, Tino Sehgal, Maria Eichhorn, and Franz Erhard Walther. The Museum of American Art Berlin is a guest with the work Kabinett der Abstrakten. The series Lily van der Stokker and guest… is concluded with a selection of works from the collection by Van der Stokker, which she gives a compliant frame.

The closing act of Part 1 will be performed by the curatorial platform If I Can't Dance, I Don't Want To Be Part of Your Revolution. From 8 until 21 March 2010 they present the project Edition III - Masquerade. The presentation at the Van Abbemuseum, curated by Frederique Bergholz and Annie Fletcher, consists of a series of new performances and projects by Keren Cytter, Jon Mikel Euba, Olivier Foulon, Suchan Kinoshita, Joachim Koester and Sarah Pierce. Edition III – Masquerade will culminate in a performance event during the weekend of 20 March 2010.

Part 2: Time Machines
The second part of Play Van Abbe, called Time Machines, begins on 10 April 2010 and is on view until the end of August 2010. In this part museum models from the past are viewed. How does the museum use presentation techniques to tell a story and what are the hidden assumptions?

Play Van Abbe has been realised in part by contributions by the BankGiro Loterij, Provincie Noord-Brabant, Mondriaan Foundation and VSBfonds.