Ten monumental steel sculptures. All variations on Venet's favorite themes, Arcs, Angles, Diagonals and Indeterminate Lines, will be represented at The Fields, reaching heights ranging from 14 to 55 feet. 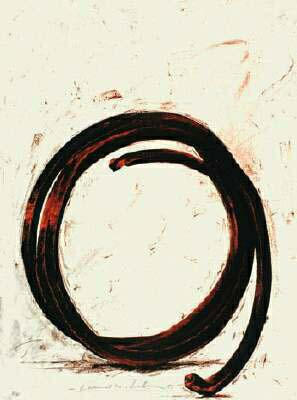 Art Omi International Arts Center is pleased to announce that ten monumental steel sculptures by Bernar Venet will be featured at The Fields Sculpture Park from June 2 - October 31, 2002. The sculptures - characterized by the artist as "lines in space" - were produced by Venet in the Vosges Mountains in northwestern France annd then shipped to the United States, specifically for this exhibition.

Bernar Venet was born in the Alpes de Haute-Provence in 1941. As a promising young artist in Nice, he covered canvases with tar and used charcoal as a raw material, motivated by a need to redefine art's traditional boundaries. A well-articulated intellectual bent and readiness to experiment propelled him to the forefront of what came to be called "Conceptual Art." After moving to New York in 1966, Venet developed a body of work, steeped in non-art propositions he borrowed from mathematicians and theoretical scientists, that was the subject of a five-year retrospective at the New York Cultural Center in 1971.

After a six-year retreat from making art in favor of furthering public understanding of the radical direction which he had taken, Venet returned to the studio. The line, in all its mathematical variations and physical shapes, came to dominate his production for the next ten years. Then, in 1983, Venet hit his stride with the much more personal "indeterminate line," a departure from the mathematical model, now convoluted and recognizable as a linear improvisation only. Translated into Cor-Ten steel, Venet's "lines" have gained visibility, over the last twenty years, in public parks and squares, on the international exhibition circuit, and in the gardens of museums and private collectors.

As an ensemble, the ten sculptures planned for The Fields surpass, in number and volume, a similar group of the artist's work which traveled from Paris's historic Champ-de-Mars to public and private sites in Hong Kong, Shanghai, Brussels, Cologne, Basel, Brasilia, Sao Paulo and Rio de Janeiro, 1996-2000. All variations on Venet's favorite themes, Arcs, Angles, Diagonals and Indeterminate Lines, will be represented at The Fields, reaching heights ranging from 14 to 55 feet.

While sculpture has been a major form of expression, Venet has made pioneering contributions in other media as well, including his early Conceptual works and his recent wall drawing and monosemic paintings. This spring, the Musee National d 'Art Moderne at the Georges Pompidou in Paris will honor those other aspects of the artist's work in an evening performance devoted to poetry, music and film.

This is The Fields Sculpture Park at Art Omi's first one-person show. The exhibition is intended to be part of an ongoing series of major one-person shows by international artists. The Fields is able to offer these artists large-scale outdoor exhibition areas within an established exhibition forum.

Sunday Brunch Reception June 2nd, 11am - 3pm. All are welcome to come meet the artist, walk the grounds and join us for brunch under a tent in the park. Admission is free and open to the public daily from dawn until dusk. Art Omi is located 2 1/2 hours north of NYC.