Opening on the artist's 81st birthday, "Recent Snow: Projected Works by Michael Snow" surveys the Canadian artist's forays into video installation from the past 9 years. A pioneer particularly in experimental film, Snow has broken ground in every medium, from photography to improvisational music. "Nothing to Declare", abandoning sculpture's traditional job, the artworks in this group show revel in humble materials and everyday processes; meanings and metaphors result form intensive experimentation and improvisation. 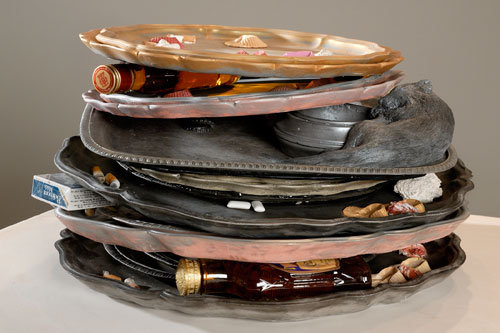 Curated by Gregory Burke, Director of The Power Plant

Opening on the artist's 81st birthday, 'Recent Snow: Projected Works by Michael Snow' surveys the legendary Canadian artist's forays into video installation from the past nine years. With seven projection works on display – most never before seen in Toronto – the exhibition includes works such as That / Cela / Dat (2000) and SSHTOORRTY (2005) as well as the world premiere of two new pieces. A pioneer particularly in experimental film, Snow has broken ground in every medium imaginable, from photography to improvisational music. The exhibition attests to the ongoing relevance of Snow's playful and experimental practice, and the influence it continues to exert on the international contemporary art world. It also marks Snow's return to The Power Plant fifteen years after the ambition retrospective 'The Michael Snow Project' (1994) was co-organized by The Power Plant and the Art Gallery of Ontario.

The product of a restless intelligence and a sharp wit, Snow's work deftly juggles and juxtaposes the sensorial and the cerebral. Snow's video projections manipulate the space between the moments of recording and of reception, the surface of the world and the surface of the screen to stage the dynamic play between a video camera and material reality. Snow uses the camera as an instrument capable of shaping and altering what is pointed toward: in his hands, realism becomes far from realistic and the familiar takes us by surprise.

Condensation . A Cove Story (2008) – which “condenses” footage of weather systems through time-lapse – transforms the passing of time as it unfolds the Maritimes. Solar Breath (Northern Caryatids) (2002) also takes inspiration from this environment: its dance of sun, window, curtain, and wind becomes “a contemplative time-light-motion work of art…”

The Corner of Braque and Picasso Streets (2009) projects a live video feed of traffic on Queens Quay West onto a cubist relief composed of rectangular plinths on the gallery wall. The brand new, four-screen Piano Sculpture (2009) is a composition spanning a quartet of piano keyboards, evidencing the vitality of music – and that instrument in particular – to Snow's aesthetic universe. Finally, Serve, Deserve (2009)– also premiering in this exhibition – projects a place setting onto a tabletop as dishes progressively fill up with food that seems to fall down the projector beam.

'Recent Snow' will be accompanied by screenings of some of Snow's iconic experimental films, and by a feature article by Montreal-based art historian Martha Langford in the Winter 2009 issue of The Power Plant's magazine SWITCH.

Michael Snow (born in Toronto, 1928) has exhibited internationally for over five decades. His films have been included in hundreds of film festivals and in retrospectives in Tokyo, Brussels and Geneva. Recent solo exhibitions have taken place at Àngels Barcelona (2009), BFI Southbank Gallery, London (2008), the Museum of Modern Art, New York (2005), and Kunst-Werke, Berlin (2002), and his work has been selected for recent biennials in Sydney (2008), São Paulo (2006) and the Whitney Museum of American Art, New York (2006). As a musician, Snow has performed internationally and has released many recordings, most recently with Aki Onda and Alan Licht (Victo, 2008)

Abandoning sculpture's traditional job of memorializing the great and the good, the artworks in this exhibition instead revel in humble materials and everyday processes. Resisting abstract and overarching statements, meanings and metaphors result form intensive experimentation and improvisation. As such, the show highlights the renewed interest of contemporary artists – emerging, mid-career and senior – in objects and materials. The work explores sculpture's status and function, its history and future.

Often straddling the boundary between figuration and abstraction, elegance and awkwardness, invention and decay, the works in the exhibition can seem ambiguous, open-ended and messy. This tentative quality mirrors the mood of our uncertain times, while the artists' ad hoc working methods suggest resourcefulness in the face of adversity. At times it is not clear if the artists are in charge of their materials or if the materials are in charge of the artists. Some artworks appear to battle against gravity or deflation while others seem to have accepted the inevitability of entropy, disintegration and disappearance.

Unassuming craft, household and DIY production processes dominate. Where the artists do use conventional sculptural techniques and media, they put them to mischievously paradoxical ends. Many incorporate pre-existing objects and substances, especially those with little financial or cultural value. While such strategies so recycling might suggest an environmental impulse, few works in the show are explicitly political. Instead they tend to make their points with lightness, wit and humility, with “nothing to declare.”

Yet, as is often the case when we make such a claim, this show smuggles in foreign baggage: partly by mixing unexpected materials and references, but also by combining artists born in Canada with those who have immigrated to the country, creating a heterogeneous picture of Canadian creativity. Taking place in conjunction with a solo exhibition by the internationally renowned Canadian artist Michael Snow, 'Nothing to Declare' continues The Power Plant's twenty-two-year tradition of presenting Canada's most engaging and influential contemporary artists in an international context.

This exhibition will be accompanied by an essay by curator Helena Reckitt in SWITCH, The Power Plant's biannual magazine of contemporary art.