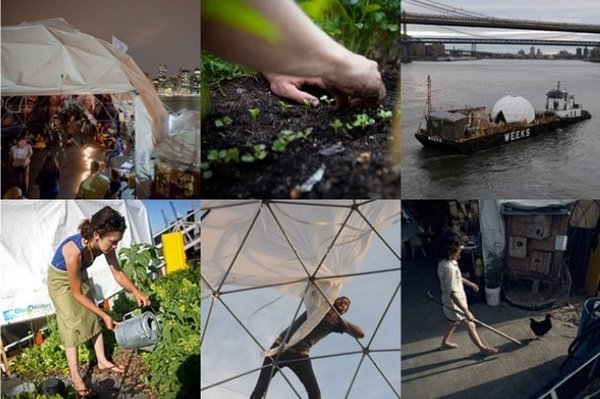 Waterpod: Autonomy and Ecology, the sixth exhibition of the SEA (Social Envrionmental Aesthetics) program, is a survey of the Waterpod's five-month voyage around the boroughs of New York. It includes videos, photographs, relics, art works, journal entries, and ephemera that tell the story of this unusual public art project.

The Waterpod was a floating, sculptural structure designed as a futuristic habitat and an experimental platform for assessing the design and efficacy of living systems fashioned to create an autonomous, fully functional marine shelter.

A New York-based multinational team, led by founder and artistic director Mary Mattingly, drew upon the talents of artists, designers, builders, civic activists, scientists, environmentalists, and marine engineers to bring this cross-disciplinary collaboration to fruition in the waterways of New York City. During a global recession and within strict government guidelines, the Waterpod managed to achieve new ways of community outreach, resource sharing, and art creation.

To fortify against the possibility of widespread climate change, desertification, overpopulation, and rising sea levels, the Waterpod offered a pathway to sustainable survival, mobility, and community building through a free, participatory project and event space that visited the five boroughs and Governors Island, for a voyage lasting from June to October 2009. The Waterpod’s mission has been to prepare, inform, and offer alternatives to current and future living spaces.

As a self-sufficient, navigable living space, the Waterpod showcased the critical importance of water within the natural world. Collectively embracing the richly-patterned folkways of the five boroughs of metropolitan New York, the Waterpod reified positive interactions between communities: private and public; artistic and societal; scientific and agricultural; aquatic and terrestrial.

Natalie Jeremijenko is an artist whose background includes studies in biochemistry, physics, neuroscience and precision engineering. Her projects—which explore socio-technical change—have been exhibited by several museums and galleries, including the MASSMoCA, the Whitney, the Smithsonian and Cooper-Hewitt. A 1999 Rockefeller Fellow, she was recently named one of the 40 most influential designers by I.D. Magazine. Jeremijenko is the director of the Environmental Health Clinic at New York University, Assistant Professor in that University’s Visual Art Department, and has affiliated faculty appointments in Computer Science and Environmental Studies.

Terreform ONE (Open Network Ecology) is a non-profit design group that promotes green design in cities. It is a unique laboratory for scientists, artists, architects, students, and individuals of all backgrounds to explore and advance the larger framework of green design. The group develops innovative solutions and technologies for local sustainability in energy, transportation, infrastructure, buildings, waste treatment, food, water, and media spaces.

Mitchell Joachim, Ph.D. is a Co-Founder of Terreform ONE. He earned a Ph.D at Massachusetts Institute of Technology, an MAUD at Harvard University, an M.Arch. at Columbia University, and a BPS at SUNY Buffalo with Honors. He is currently on the faculty at Columbia University and Parsons. He has been awarded the Moshe Safdie Research Fellowship and the Martin Family Society Fellow for Sustainability. He won the History Channel/Infiniti Award for the City of the Future, New York, and Time Magazine's Best Invention of the Year 2007. His project, Fab Tree Hab, has been exhibited at MoMA. He was selected by Wired magazine for "The 2008 Smart List: 15 People the Next President Should Listen To." Rolling Stone also honored Mitchell in "The 100 People Who Are Changing America."

Maria Aiolova is a Co-Founder of Terreform ONE. She received her MAUD from Harvard University, her B.Arch. from University of Sofia, Bulgaria and attended the Technical University of Vienna, Austria. She also holds a Professional Degree in Architecture from Wentworth Institute of Technology and a certificate in Green Building Design from Cooper Union. She has won first place in the CHARLES/MGH Station Competition, Boston and the Izmir Post District International Competition, Turkey. As a founder and director of Compost Art Center, a nonprofit artists residency program, Aiolova has been involved in the design and construction of affordable and dynamic spaces for artists. In 2004, she formed the Design/Build Partnership focused on simple, low-cost housing in the Hamptons, challenging the current standards of grandiosity by utilizing simple sustainable building strategies. She has taught at Wentworth Institute of Technology and Boston Architectural Center and has been a visiting lecturer and critic at Harvard GSD, Columbia University, Parsons, CUNY, Washington University, Rhode Island School of Design and University of Toronto.

Geoff Manaugh is the author of BLDGBLOG (bldgblog.blogspot.com) and
The BLDGBLOG Book, as well as Contributing Editor at Wired UK. He has lectured on a variety of design topics at schools and museums around the world, from the Bartlett School of Architecture and SCI-Arc to the Australian National Architecture Conference, Storefront for Art and Architecture, and the Center for Land Use Interpretation. He has written for Volume, Domus, and Abitare, among others, and he has contributed essays to books by photographers David Maisel and Michael Wolf. The BLDGBLOG Book was chosen by Amazon.com as one of their 100 Best Books of 2009.

This panel discussion will focus on how public art and art in general can be sustainable, with an emphasis on how the terms “temporary” and “permanent” impact the possibilities for sustainability when it comes to artmaking.

Mary T. Mattingly, Founder
In 2006 her work headlined “Ecotopia,” the International Center of Photography's Triennial. In 2007, she completed solo shows at White Box, NY, Galerie Adler, Germany, and at the New York Public Library. She has co-curated several water-based exhibitions on maritime vessels, alongside the Miami Basel Art Fair, the Venice Biennale, and the Istanbul Biennale. In 2008, Mattingly was nominated for the Prix Pictet Award and has recently exhibited work at the Palais de Tokyo in Paris, France, the Tucson Museum of Art, AZ, the Neuberger Museum, NY, and at Robert Mann Gallery, NY. Her work has been reviewed in ArtForum, the New York Times, the New Yorker, Financial Times, Sculpture Magazine, Le Monde Magazine, CITY Magazine, Aperture Magazine, Nature Magazine, Brooklyn Paper, and Time Out New York. Mattingly is currently working on “Air Ship Air Cities,” a rooftop habitat in Brooklyn.

Ian Daniel, Curator/Events Coordinator
Ian Daniel is a curator and filmmaker. He graduated from DePauw University in 2004 as a Media Fellow and worked for the TODAY Show on NBC and in casting for independent films in New York. He was the Assistant Curator for the art website culturehall.org. Daniel completed a curatorial internship with The Kitchen; was the Studio Assistant to artist Piotr Uklanski; and was the Collection Assistant to the private art collection of Rachel and Jean-Pierre Lehmann. He also received a design certificate in permaculture at the Lost Valley Eco-Village in Eugene, Oregon. Daniel and artist Mary Mattingly are currently working on a new project, "Air Ship Air City," of which Daniel is the Creative Director.

John McGarvey, Executive Director
John has been a local and international Art/Technology/Creative consultant for the past 15 years as well as an art and political activist. A kayaker and maritime environmental proponent for 10 years in the New York waterways, he is a primary organizer for the Long Island Community Boathouse. John has also done professional Hollywood film kayak stunt work on the East River as well as water rescue. John is currently the Director of Development for the Action Arts League and on the Board of Directors of Millennium Film Workshop. John is also working on a film titled “The Greatest Silence.”

SEA (Social-Environmental Aesthetics)
SEA is a unique endeavor that presents a diverse multimedia exhibition program and permanent archive of artworks that address social and environmental concerns. SEA will assemble artists, activists, scientists and scholars to address environmental issues through presentations of visual art, performances, panels and lecture series that will communicate international activities concerning environmental and social activism. SEA will occupy a permanent space in Exit Underground, a 3000 square-foot, multi-media performance, film and exhibition venue underneath Exit Art’s main gallery space. The SEA archive will be a permanent archive of information, images and videos that will be a continuous source for upcoming exhibitions and projects. Central to SEA’s mission is to provide a vehicle through which the public can be made aware of socially- and environmentally-engaged work, and to provide a forum for collaboration between artists, scientists, activists, scholars and the public. SEA functions as an initiative where individuals can join together in dialogue about issues that affect our daily lives.

New Mirrors surveys the state of current painting through the work of seven New York-based artists. In particular, this exhibition positions painting as a way of thinking about perception in the age of digitization, information and instantaneity.

Painting continues to re-invent itself with each new movement, each technological advance that threatens its existence. The history of this ancient language in the West, like the history of wars, is one of innovations trumping obsolete technologies and strategies; therefore, it is a narrative marked by small deaths that clear the way for “the new.” The artists in this show engage in what painter Benin Ford refers to as a “critical recovery” of past methodologies and techniques, revisiting certain failures, triumphs and lost moments in painting’s history.

Ever since the advent of photography, it has become necessary to look at how painters are animating their practices in the information age – an environment that seems particularly untenable for painting. But rather than lingering over aspects of the current cultural moment that might limit painting’s impact—the speed of information, social networking, digitization, out-sourcing, reproduction technologies and dematerialization—many young artists today concern themselves with theoretical inquiries into the logistics of painting: images, symbols, gestures, colors, materiality and texture. While considering the possibilities of these lingering issues, they also think about how new technologies and social dynamics influence perception of the visual field. The artists in this exhibition do this with an eye towards innovation – dragging the corpse of painting to the limits of legibility with processes that mirror a philosopher’s probing, discursive thinking.

SUPPORT
This exhibition is sponsored by a major grant from the Jacques and Natasha Gelman Trust.