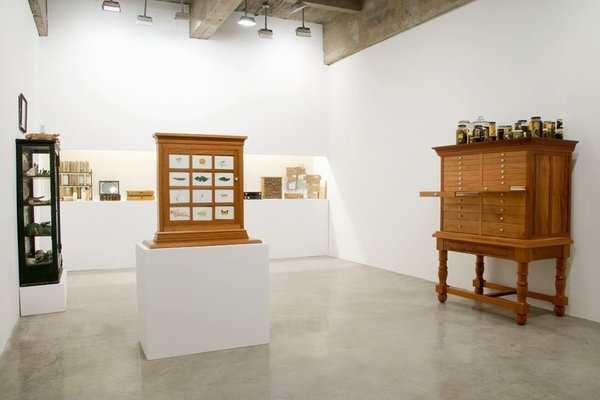 Tanya Bonakdar Gallery is very pleased to present its fifth solo exhibition of Mark Dion's work, an installation of sculpture from the artist's ambitious recent project of exploration, history and art entitled Travels of William Bartram—Reconsidered.

Investigating the visual representation of knowledge and the natural sciences, and concerned with the historical methods of representing and organizing the world, Mark Dion employs pseudo-scientific and museological conventions of investigation and display in order to subvert previously held ideas and practices. The act of participation, or the role play of a scientific, pastoral or naturalist endeavor has been a fundamental fascination within Dion's practice, and has played a major role in a number of his most significant projects over the past two decades. Travels of William Bartram—Reconsidered is such a project and represents Dion’s extensive travels throughout the southern United States. In an effort to examine the history and culture of 18th century American naturalist, botanist and explorer William Bartram, Dion followed the approximate course of Bartram’s four-year expedition through eight southern colonies to take notes on the Native Americans and the indigenous flora and fauna. Using the original travel journals, drawings, and maps, Dion initiated his own, modern day, exploratory journey. Often traveling by horseback, canoe, and Jeep, Dion collected, scavenged and acquired numerous artifacts, specimens, and objects of material culture and mailed them back to Bartram's Garden, the historic 18th century home of William Bartram, and his father John Bartram in Philadelphia.

Combining the physical beauty of history and science with the detritus of contemporary and past material culture, thousands of objects are beautifully and painstakingly categorized and arranged. Organized in various presentation cases and cabinets, according to form, material and subject, little distinction is given between high or low, or any inherent sense of value. Rather, Dion presents the display itself as a kind of democratizing filter, alluding to the wonder and magic of the every day. Found man-made elements include an extensive collection of toy plastic alligators, bottle caps from the decades between Bartram's and Dion's respective travels, cocktail umbrellas, pencils and buttons. Other shelves and drawers present organic specimens such as acorns, seashells, and pressed and dried vegetation harvested from the road and stacked high on a tall custom-built cabinet. As with all of Dion's work, however, it is truly the artist's selection and presentation that inspires the viewer; offering a fascinating investigation into the inherent contradictions between the artifact and the context in which it is displayed for our consumption.

These wondrous sculptures acknowledge conventions as wide ranging as correspondence art, the great American tradition of the travelogue, cabinets of curiosity, and the surrealist’s fascination with exalting the ordinary. Presented in an intimate arrangement the installation becomes a room of wonder that speaks of an individual and collective past. The provenance of each of the objects culminates in a diverse mosaic of narratives. Overall, the installation is a monument to Dion’s travels and the complexity of the relationship between nature and culture.

An earlier iteration of Travels of William Bartram—Reconsidered, curated by Julie Courtney, was exhibited last year at Bartram’s Garden, Philadelphia. Mark Dion: Travels of William Bartram—Reconsidered, a 110 page full color catalogue published by Bartram’s Gardens to coincide with the first exhibition will be available at the gallery.

One shudders at the notion of contemporary travel. Images of the dreaded middle seat on a stale and stingy American Airlines flight haunt the imagination. Delays, discomfort, and duty meld with a vague sense of guilt for contributing to the carbon glut. This exhibition however has nothing to say about the banalities and petty betrayals of the business and holiday traveler, rather it focuses on a collection of international artists for whom travel is still an adventure, and is celebrated as the most profound way of knowing.

For the artists featured in Strange Travelers the notion of going places retains a sense of the marvelous. Their sense of travel is recognizable in the works of Jules Verne, Jacques Cousteau, and Paul Bowles. The journeys they consider and undertake recognize the complex and often grim historical realities, and are not without risk, however they are accompanied by the certainty of wonder the potential of discovery. Bound by an understanding of travel as a sophisticated technology of knowing, these artists also share a core commitment to placing themselves in the field. The voyage itself may be emphasized and the destination is less of a goal but rather a strategic and provisional excuse for extending the journey.

Each of these artists maintains a scientific worldview, which does not view science as a foil to a sense of wonder. Rather than viewing science as a manner of explaining away or bleeding the fascination out of the beauty of nature, these artists see science as a tool of amazement that allows nature’s rich complexity and diversity to be apprehended. They owe as much to the history of visual arts in the service of science (Audubon, Blossfeldt, Painleve) as they do to the legacy of landscape and earth art.

The exhibition contains works by a number of international artists, some of whom, while widely known in Europe are exhibited here for the first time in a New York gallery context. Till Krause, founder and director of the Maunch Galerie fur Landschaftskunst in Hamburg, which is devoted to artists exploring, mining and expanding the landscape genre, is widely known for both his own explorations of mapping as well as his numerous and varied collaborative endeavors with artists, scientists, urbanists and institutions. Sanna Kannisto, who lives and works in Helsinki, established herself as a photographer and media artist of exceptional skill working alongside of scientific researchers in the rainforests of the American tropics. Her work underscores the problematics of isolating organisms from their intricate web of relationships in the forest community. Laurent Tixador and Abraham Poincheval are a collaborative team from France whose projects are invested with a sense of adventure, risk and reassessment of the romantic tradition embodied by tales like Robinson Crusoe, and Journey to the Center of the Earth. For this exhibition, artifacts and documentation from their project in Murcia, Spain, in which they were entombed and each day excavated a tunnel is exhibited. David Brook’s understanding of the urban landscape and its features as not outside of the biological and geological process is expressed by exploration of the city as an entropic site. Vernacular urban features are understood as in flux between a natural past and future. Lastly, painter and celebrated author James Prosek explores the cultural hybridization occurring in wildlife art. His 'tool birds,' reference a society that struggles to understand value in nature outside of pragmatic and capitalist systems. His work rooted in scientific and wildlife art probing the space between knowing, not knowing and imagining.

Tanya Bonakdar Gallery is very pleased to present Relics and Reliquaries, an exhibition of sculpture and installation by Jeffrey Vallance. This will be the artist’s first solo show with the gallery.

For over thirty years Vallance has turned a critical and humorous eye toward his own wide-ranging experience, using his adventures as the basis for his drawing, sculpture, installation, and performance based pieces. His childhood in California, voyages to the Polynesian Islands and Iceland, residences in Las Vegas and the Arctic, and sojourns to the Vatican are all represented in his work. Vallance’s examination of these memories, journeys and explorations combines a pseudo-anthropological approach with an art historically informed practice, and addresses themes of faith, myth, and ritual, the power of pop culture, and the historical and contemporary geo-political landscape. Interweaving these themes and topics, Vallance presents the results of his inquiries in works that are at once wittily subversive and earnestly revelatory.

Installed throughout the gallery’s main space, Vallance’s 'Relics and Reliquaries,' are sculptures that irreverently sanctify seemingly banal objects of personal significance to the artist in small intricately crafted cabinets that recall traditional Catholic reliquaries. A single broken Christmas light is lovingly enshrined in a small box crowned with a cross; a 'soap-on-a-rope' in the shape of the Polynesian God Tiki reclines in an intricately carved vessel lined with velvet. Each reliquary is installed with a corresponding plaque that gives the reason and context for its importance to Vallance. Together the works and their explanations form a visual and textual hagiography for the artist. Blurring the line between the holy and the secular, these pieces seem to propose that certain objects have the same transcendent power to access the memories, thoughts and feelings of individuals as relics have to access the faith of the believer. Vallance makes this proposition in a manner that is as much playful as it is provocative. His expansive view of what constitutes a relic and what a relic might be presented in is not meant to undermine the religious use of this form of presentation; instead his sculptures exist alongside traditional relics and reliquaries, as a new addition to the genre.

Vallance has always been an avid collector and since he was a child he has experimented with modes of presentation, even building a museum in his bedroom. 'The Brown Wall,' in a humorous reversal, brings a piece of Jeffrey’s home to the gallery. When moving into their ‘50s tract home in the Valley, Vallance and his wife were confronted with a strange brown wall in their living room, and decided to 'go with a brown theme and put all brown artifacts on the wall so it looks intentional.' Continuing Vallance’s investigation of methods of display, 'The Brown Wall,' presents artifacts and mementos from trips to places as far as Lapland and as close as a neighboring thrift store in Vallance’s own taxonomical order.