Also on view: Object as Subject - Photographs of the Czech Avant-Garde 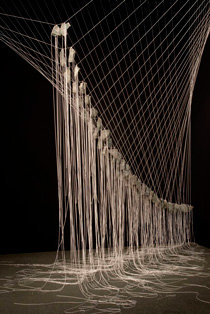 Intersections is a new series of contemporary art projects that explores-as the title suggests-the intriguing intersections between old and new traditions, modern and contemporary art practices, and museum spaces and artistic interventions. Whether engaging with the permanent collection or diverse spaces in the museum, the projects suggest new relationships with their own surprises.

Many of the projects also riff on the nontraditional nature of the museum's galleries, activating spaces that are not typical exhibition areas with art produced specifically for those locations.

Brain Storm, Jennifer Wen Ma
October 15, 2009-January 3, 2010
In this video projection with sound, a man and horse travel through a stormy landscape, suggesting an inner journey. The piece will be displayed in the Phillips house in conversation with artwork that evokes spatial or temporal travel, including landscapes by Paul Cézanne, Arthur Dove, and Wassily Kandinsky. Video stills from Brain Storm will be affixed to the glass walls of the walkway from the house to the Goh Annex, reiterating the notion of travel. Brain Storm was commissioned for Guggenheim Bilbao in 2009.

Icarus, Barbara Liotta
October 22, 2009-January 31, 2010
Conceived as a portrait of human energy and inner strength and as a symbol of flight and aspiration, this large-scale sculpture is made of strings and stones and suspended from the ceiling. Icarus is paired with portraits from the museum's permanent collection, including Eugène Delacroix's Paganini, Amedeo Modigliani's Elena Povolozky, and Chaim Soutine's Woman in Profile.

Pulse, Tayo Heuser
November 19, 2009-October 31, 2010
Tayo Heuser translates the luminosity of Mark Rothko's paintings into three dimensions with large-scale wall-mounted sculptures of glowing, colored forms drawn in ink, designed to rise along the spiral flow of the Goh Annex stairwell. The work was created in response to both the architecture of the stairwell and the paintings in the museum's Rothko Room.

Ongoing project:
this is not that CAFÉ
May 7-December 30, 2009
Set in the museum's café, this is not that CAFÉ pays homage to the idea of the traditional café as a place for social interaction and vanguard thinking. The project is the work of dBfoundation, a group of artists dedicated to creating temporary, ephemeral, and inhabitable art. Related, themed events, such as Poet Night and Game Night, take place during Phillips after 5, on the first Thursday evening of every month.

Some of the most innovative approaches to photography were pioneered by the Czech artistic avant-garde in the early decades of the 20th century. After the establishment of Czechoslovakia in 1918, a vibrant cultural life sprang up around Prague, fueling the minds and imaginations of a generation of photographers, including Jaromír Funke, Jaroslav Rössler, and Josef Sudek. Object as Subject: Photographs of the Czech Avant-Garde examines the important role of objects in the Czech avant-garde's exploration of the formal concerns of abstraction. It presents 30 photographs by 10 Czech photographers, from abstract compositions of the 1920s by Funke and Rössler to surrealist photographs of the 1930s by Adolf Schneeberger and František Vobecký. Departing from conventional approaches to still life, Czech photographers experimented with dramatic effects of light and shadow, bold geometries of line and form, and unusual perspectives. The American expatriate Man Ray had a profound influence on his Czech contemporaries. Man Ray's radical experiments reached Czechoslovakia in 1922, a time of growing Czech interest in abstract art. Ultimately for the Czech avant-garde, objects provided a laboratory for formal investigations of abstract principles of light, shadow, geometric planes, and space. Within this framework, objects functioned as vehicles for abstract expression, affirming their powerful role in the creative process.