The solo show 'Retina' displays nineteen previously unshown pieces that deal with the visual perception and abstraction of the world of objects. The pieces, with an almost complete absence of figurative elements, form a visible caesura in this artist's work, yet consistently develop and refine the fundamental concern of his oeuvre with pictorial reality. The show thus evokes a painterly discourse that reflects upon the boundaries of perception of inner and outer. 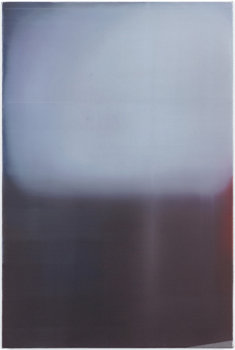 The Schirn Kunsthalle Frankfurt is devoting a solo exhibition to the Dresden painter Eberhard Havekost. "Retina" will display nineteen previously unshown pieces that deal with the visual perception and abstraction of the world of objects. The pieces, with an almost complete absence of figurative elements, form a visible caesura in this artist's work, yet consistently develop and refine the fundamental concern of his oeuvre with pictorial reality. The show thus evokes a painterly discourse that reflects upon the boundaries of perception of inner and outer.

Through their explicit reference to visual perception, the six pictures in the series that gives the show its name, "Retina" (2009), establish the conceptual ground of the works: light falling on the retina of the eye generates visual stimuli that are transmitted to the brain via nerve impulses. Arriving impulses are combined with established experiences and habits of seeing, and with the observer's horizon of knowledge, enabling the intellectual grasp of what has been seen. In this respect, Havekost's painting appears to be a direct depiction of the processual character of perception – the inner aspect of the eye could look like this, before the incoming light is translated into pictorial information.

There is a corresponding departure from the representational, and the surface of the painting is transformed into a matrix of colour and form, behind which the additive painting process remains obscured: "Retina" refers back to the digital recording of a flat screen that is showing a television series from the Comedy channel. The eye of the beholder tries in vain to order the individual colour patterns and to forma relationship to the world of objects. While the gaze wanders across the surface of the painting, trying to find an approach to decoding the scenery, the observer acts as if watching a computer screen, looking for input fields for search terms, texts and user commands. If the observer's structuring gaze succeeds in organising the forms in front of one's internal eye, and in connecting them to one's own horizon of knowledge, the picture can be decoded bit by bit. Still, the result would be anything but unambiguous: and in this sense Havekost's paintings stimulate a discourse that transforms the exhibition space into a place of reflection.

In the new group of works, Havekost increasingly uses his predominantly abstract compositions to disengage himself from any reference to objective reality, thus leaving behind the pictorial world of his earlier works. Like the works of past years, however, the current pictures arose from a pool of pictures, for which Havekost collected glossy photographs and snapshots from magazines, newspapers and videos, and increasingly his own private photographs, all of which he organises in an extensive digital archive according to particular criteria. Using a laborious sampling process based on adaptation and addition, the artist displaces and abstracts the raw material with digital imaging software, developing from this the motifs for his paintings and prints. In the creative process, the computer serves as a digital sketchbook enabling an intensive engagement with the object of the painting via perspective studies and other methods of dislocation.

In the situation of an exhibition, the play of visual tensions continues. Eberhard Havekost sees the paintings shown here not simply as individual pictures and series, but rather as an analytical space produced through the specific combination of the individual works and their hanging. Through this conceptual juxtaposition, the works show multiple possibilities of the artistic working-through of reality; they become painting of the digital age.

Eberhard Havekost was born in Dresden in 1967 and, after training as a stonemason, studied painting at the Hochschule für Bildende Künste (Dresden Academy of Fine Arts) from 1991 to 1996. In 1999 he was awarded the Karl Schmidt-Rottluff scholarship, and has taken part in numerous international group exhibitions, including shows at the National Art Museum Beijing (2008), the Tate Modern, London (2006), and the Museum of Contemporary Art Chicago (2005). Solo shows have been held at international institutions such as the Stedelijk Museum, Amsterdam (2006), the Kunstmuseum Wolfsburg (2005), the Staatliche Kunstsammlungen Dresden (2005) and the Museu de Arte Contemporânea de Serralves, Porto (2001). Havekost lives and works in Berlin.

CATALOGUE: "Eberhard Havekost. Retina". Edited by Heide Häusler and Max Hollein. With a foreword by Max Hollein and a text by Jean-Charles Vergne. 64 pages, 30 illustrations, published by the Buchhandlung Walther König, Cologne 2010, ISBN 978-3-86560-740-9.