Ecstatic Peace Poetry Journal, Issue #10: an exhibition, publication, and a series of readings and performances. Doug Biggert: 41 photographs of hitch-hikers that the artist picked up, mostly in Northern California in the 1970s. Between collaboration and curation, Margaret Lee uses potatoes to intermediate between the works themselves and the other two participating artists: Michele Abeles and Darren Bader. In the project space Grace Schwindt presents two recent video works. The Bulletin Board: scenes from the New York Art World c. 1979. 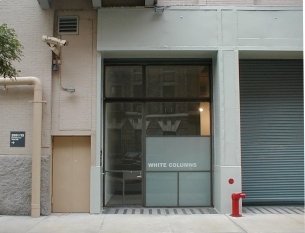 White Columns is proud to present Ecstatic Peace Poetry Journal, Issue #10: an exhibition, publication, and a series of readings and performances.

Moore was inspired to publish Ecstatic Peace Poetry Journal after years of appreciation, study and relentless archiving of post-war poetry publishing focusing on the activity of the “mimeo revolution” of the ’60s and ’70s. The stapled mimeo poetry journals produced from the St. Mark’s Poetry Project, Peace Eye Bookstore in New York City, and Asphodel Bookstore in Cleveland, Ohio, as well as a myriad of other subterranean centers of shared post-beat writing, rage, meditation and experimentation continues to inform the publication of Ecstatic Peace Poetry Journal.

Issue #10 of Ecstatic Peace Poetry Journal will be published and presented at White Columns as an expanded event/exhibition. A stapled issue will be created during the show. Pages from each of the ten journals will be exhibited as enlarged wall pieces, including the heretofore unpublished issue #9, [in keeping with the journals every-third-issue a theme issue, i.e., #3 was themed “cunnilingus,” #6 was “punk,”—with #9’s theme “pot”]. The main gallery space will feature a selection of historical poetry publications from the last fifty years culled from Moore’s own library, including original editions of Amphora, Change, Coldspring Journal, Copkiller, Fervent Valley, Free Poems Amongst Friends, Gaslight Poetry Review, Kauri, Klactovedesteen, LA-BAS, Outburst, Stance, Sum, The Willie, Trobar, Yowl and more.

Working as co-editor on many aspects of Ecstatic Peace Poetry Journal, including this exhibition is writer Byron Coley, formidable musicologist, essayist, poet and producer of music and literary arcana, ephemera and beyond. Select pieces from Moore and Coley’s catalogue will be reprinted in limited states for this exhibition. Eva Prinz, editor, co-publisher of Ecstatic Peace Library and curator of Radical Living Papers: Free Press 1965-75 (2007) brings additional organizational and creative force to Issue #10 as a gallery event.

All performances and readings are free, admission on a first-come basis.

Organized by Bob Nickas, the show includes forty-one photographs of hitch-hikers that Biggert picked up, mostly in Northern California in the 1970s. As Nickas has written, “While it’s easy to think of Biggert’s car as his mobile portrait studio, what’s most compelling to consider is how all the pictures, brought together over many years and from across the whole country, not only reflect a spirit of time and place but form a larger portrait of the man who made them.”*

“At the crossroads where we find a good samaritan and an amateur photographer are nearly 500 pictures of hitchhikers he picked up along the way, mostly in Northern California between the early 70s and today. Doug Biggert, having hitched himself in the 60s, was particularly attuned not only to how easy it was to help someone stranded on the side of the road, but how every person represents a story. Some are more interesting than others, of course, but even when someone has little to offer — and conversation was one draw for Biggert — there's still the possibility for a good picture. Calling him an amateur is not entirely fair. His knowledge of photography, from the great figures in its history such as Eugène Atget and Henri Cartier Bresson, to the Americans working on the road both before Biggert and at the same time, Robert Frank and Stephen Shore most prominently, clearly served him well. Flipping through his book, Hitch-Hikers, there are portraits that could easily be inserted into Shore's American Surfaces, with a similar visual vibe and sensibility. The 70s feel of color, of the people looking so much of the moment, adds to the record of that decade's vernacular photography, now well regarded but dismissed at the time. That Biggert's pictures surfaced at all, as is the case for so much art and music made outside of the mainstream, is a matter of happenstance, particularly with regard to the fascination that Europeans have for the road movie and the American west. Biggert's collection taps into that ethos over and again, with a seemingly endless cast of extras, each one the star of their own film still.” *

The Hitch-hikers collection was originally assembled and exhibited in Europe by Xavier Carcelle and Chloe Colpe. Hitch-hikers, a selection of the photographs, was published in 2007 by Husson Editeur. Carcelle and Colpe also produced the documentary Beautiful America (2008):

Doug Biggert lives and works in Sacramento and is represented by Verge Gallery and Studio Project, Sacramento, CA.

White Columns is pleased to present a project organized by Margaret Lee.

These potatoes look real but they are not real. They have appeared twice before in two separate installations, though never as autonomous objects. They have been paired in the past with a cake sculpture and other cast vegetables. The potatoes, in this installation, exist with and within the works of Michele Abeles and Darren Bader.

Somewhere in between collaboration and curation, Margaret Lee uses her potatoes to intermediate between the works themselves and the other two participating artists. Neither artist was asked to follow any guidelines or rules in their approach to the project (except that they incorporate the potatoes into their own work) and all the resulting works have singular authorship. In working with Lee, Abeles uses a pile of potatoes as a prop in a new ongoing series of human-cum-still life photographs. In another image, she crudely uses the digital gesture of "cut and paste" by taking a photograph of the pile of potatoes and pasting it onto one of her pre-existing still life images (which is also present in the exhibition). Bader, inserts a glass onto a shelf lined with potatoes and also buries an iPod in a large pile of potatoes, which connects to two large speakers, nestled into an armchair, as Alicia Keys’ “No One” plays on random repeat, yes – “no one, no one, no one”.

Michele Abeles (MFA Yale, 2007) lives and works in New York. Recent exhibitions include: ‘A Song For Those In Search Of What Came’, Bellweather, New York; and ‘The Newest New York’, Prague Biennale, Rague, Czech Republic. (Both 2009.)

For her exhibition in White Columns’ project space she will present two recent video works: ‘Meeting Florchen Gordon’ and ‘The Chair’.

Grace Schwindt uses the moving image to investigate and interrogate the construction of history and the systems involved in the production of knowledge.

The notion of ‘witness’ and the creation of memories - and realities - through written and spoken language, as well as silence, are central to her works. Schwindt questions claims of authorship and identity to both reflect upon and critique history.

In the video works on view, stories told by her immediate family members serve as a departure point to explore how people both create and deal with history.

Schwindt’s works ultimately express a desire to be in touch with history as a means to understand the present.

Schwindt has produced a new issue of White Columns’ occasional publication ‘The W.C.’ that accompanies her exhibition.

Grace Schwindt (b. 1979) received an MA in Fine Art in 2008 from the Slade School, London, and a BA in Photography in 2005 from the University of Westminster, London.
Since 2005 her works have been included in exhibitions, screenings and festivals internationally. Her work was included in the ‘EAST International’ exhibition, Norwich Gallery, Norwich, UK (2009) – selected by Art & Language and Raster Gallery.

The Bulletin Board
Scenes from the New York Art World c. 1979