Stowaways - Hidden passengers in contemporary art, 2000-2009 is about the embarassing, the hidden, the uncool; these videos are about what we do not want to think about. Works by Patty Chang, Katarzyna Kozyra, Christina Lammer and others. With the title of "Implexities" the exhibition by Juan Luis Moraza presents a series of artistic trials which aim to become works of art, but whether they do will depend upon how much the public that views them feel they are. 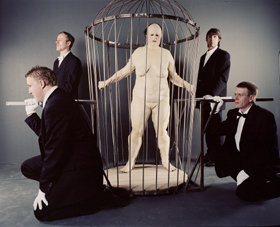 HIDDEN PASSENGERS IN CONTEMPORARY ART, 2000-2009
Stowaways is about the embarassing, the hidden, the uncool, and the cool to catch up to. These videos are about what we do not want to think about or think about and do not want or what we think about and you haven't thought about yet. The transformation of powerlessness into power by showing. Bill Viola with a handycam. What do a colonoscopyvideo, a woman washing her clothed husband and eels under a blouse have in common? Masturbation, a feminist writing love letters, obviously not so successfully in love. At least it is a story from the past, an artist making fun of the role of the curator, a videopiece called "tschuktschuk" which I haven't seen yet (why should I lie as a curator?) You will see it and by the time Stowaways is presented to the public I will have seen it, too. Then a singing artist disguised as a fat woman to question the quality of the singing and of the beauty of bodies. Stowaways is about the disorder in art and a kind of honesty of the failed picture or the missing links behind a pretended shinier surface or ambition. Stowaways is meant as an extension to show a glimpse of what you do not see when you go into an art exhibition. This can be good or bad. Good or bad. Good or bad art. Judgement day. Then of course you can show everything in an art context, so why not? When the Stowaways get out of the boat the story continues. What happens after the exhibition, the aftereffects? -Who made which connection, which meanings were created for whom, Stowaways to take home or away or into the next exhibition? No group show is a justified presentation of gender, sexuality or identity. An artist curator is not a normal curator. I wanted a loose combination, I did not want something definitive, I wanted the audience mildly entertained and slowly drawn into some of the videos and I wanted the selection to have enough absence of sense to be truthful.
Elke Krystufek

With the strange title of "Implexities" this exhibition presents a series of artistic trials which aim to become works of art, but whether they do will depend upon how much the public that views them feel they are in tune with them and whether they want them to become works of art. They offer us the sensitivity of a sculptor, or, in other words, somebody who recognises the uncompromising importance of materiality and the body. It is precisely this inevitably structured materiality that is offered as a subject in a reflection on contemporary subjectivity.
Juan Luis Moraza.


The Centro Cultural Montehermoso Kulturunea, in accordance with its desire to support creation and research in contemporary art and thought, announces a call for entries for a series of grants. The objective of this initiative, which is promoted by the Vitoria-Gasteiz City Council, is to facilitate the production of thirteen selected projects in the following categories: Art Project Production, Curatorship, Research and Film Scripts. Authors of any nationality, regardless of age, can present their projects individually or collectively.

Centro Cultural Montehermoso Kulturunea
Fray Zacarías Martínez, 2 - 01001 Vitoria-Gasteiz Spain
Opening hours
From Tuesday to Sunday, from 11 to 14 and from 17 to 21.
Closed on Monday