The year-long exhibition project Domino' Canibal will use a single venue, the 18th century convent church Sala Veronicas, over a period of twelve months. Starting with the sculptor, essayist and poet Jimmie Durham, each successive artist (Cristina Lucas, The Bruce High Quality Foundation, Kendell Geers, Tania Bruguera, Rivane Neuenschwander and Francis Alys) will create his/her work based on what was created by the preceding artist, either destroying it, appropriating or reinterpreting it. Durham makes the first move in Domino' Canibal, taking over the exhibition venue and questioning the division between inside and outside in the Western sacred space: both a religious temple and an exhibition hall. 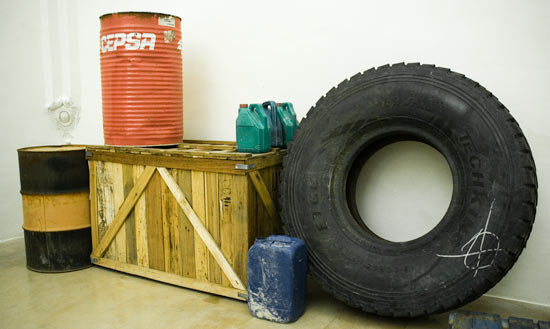 The year-long exhibition project DOMINÓ CANÍBAL will use a single venue, the 18th century convent church Sala Verónicas, over a period of twelve months. Starting with the sculptor, essayist and poet Jimmie Durham, each successive artist [Cristina Lucas (March 26th), The Bruce High Quality Foundation (May 21st – see images of their 'temporary office' for Latitudes' participation in 'No Soul for Sale'), Kendell Geers (July 9th), Tania Bruguera (September 24th), Rivane Neuenschwander (November 12th) and Francis Alÿs (December 17th)] will create his/her work based on what was created by the preceding artist, either destroying it, appropriating or reinterpreting it.

Jimmie Durham's exhibition will open on Monday 25th January, and will be preceded by a conversation between him and Cuauhtémoc Medina, curator of 'Dominó Caníbal', on Friday 22 January, 6pm at CENDEAC. Below images of the artist during his recent site visits to Murcia and surroundings.

As PAC 2010 curator Cuauhtémoc Medina has stated “my starting point is the operation of the game of dominoes, which is a very widespread transcultural point of production. (...) From the ideological use of the so-called “domino effect” brings to mind the terrors of the Cold War and beyond”. Here "the creative process depends on observation and interaction with the previous moves, instead of viewing itself as the production of some unique and conclusive image." (1)

The ongoing creative process taking place in Sala Verónicas will be filmed in real time and on view at the PAC MURCIA website.

As with the previous PAC in 2008 (see Latitudes' posts here and here) a series of activities are running parallel to PAC 2010: a seminar organised in collaboration with CENDEAC (Centro de Documentación y Estudios Avanzados de Arte Contemporáneo), a programme of exhibitions in art galleries in the region and series residences for artists from Murcia in Europe and America.

Coinciding with this edition of PAC, the European Biennial for Contemporary Art Manifesta 8 will also take place in Murcia and open on October 1st . The event is curated by three collectives Alexandria Contemporary Art Forum (Egypt), Chamber of Public Secrets (Denmark, Italy, Lebanon) and Tranzit (Austria, Czech Republic, Hungary and Slovakia) (see Latitudes post here and here) with the "aim to engage with Europe’s present-day boundaries with Northern Africa and its interrelations with the Maghreb region." (2)

PAC (Proyecto de Arte Contemporáneo de Murcia 2010) is a project by the Dept of Culture & Tourism of the Region of Murcia featuring the exhibition DOMINÓ CANÍBAL, curated by Cuauhtémoc Medina, together with other initiatives aimed at fostering international contemporary art and the visibility of artists from the region.

"Jimmie Durham makes the first move in Dominó Caníbal, taking over the exhibition venue —the former Verónicas church in Murcia, Spain— and questioning the division between inside and outside in the Western sacred space: both a religious temple and an exhibition hall.

Durham has taken over the nave of the former church and turned it into a repository for a heteroclite collection of objects, residues and things: a communal grave, a subversive classification or a residual map of the world. The crux of the operation lies in introducing "the profane" in its deepest etymological meaning into the religious and aesthetic temple: everything that remains "before the temple", in other words what is "before" the feast or is excluded in order to invest the sanctum with its spatial purity. Pieces of cement, wire, refrigerators, barrels, bits of glass and residues of "the sacred", speak of the space of the exhibition hall in an attempt to connect the interior of the church with all that it threw out in order to be sacralised, which is to say, transforming it into a kind of "temple of confusion".

The result is an invasion that disturbs the Western notion of transcendental spatiality defined by a negation of chaos, of the living and the contamination of the world. If this bricolage contains a map of the world excluded by religious artifice, it is because it resists all representation and metaphor, in other words, any device that understands "meaning" as a rejection of immanence. One on hand, the project is the result of a process of research into the concrete: the inventory Durham gathered throughout the period of one month in the city of Murcia and its surrounding area, excavating in its industrial archaeology and the layers of culture and violence that compose it, and establishing an ongoing conversation with its inhabitants. The driving idea is in fact to bring to the surface "everything" excluded from the temple, not only in the accumulated mass of deposits, but also because each and every thing introduced into the church brings with it all that is associated with it, that substitutes for it and that involves it through proximity and contact. Technically speaking, we could say that Jimmie Durham's installation is a huge metonymic banquet.

In the greater view of Dominó Caníbal, a year-long project which will see another six artists intervening, destroying, resignifying and devouring the banquet that he has created here, Durham's installation and opening move in the game is like 28 double sixes or having desecrated the temple with the corpse of everything. Jimmie Durham's challenge to Cristina Lucas, The Bruce High Quality Foundation, Kendell Geers, Tania Bruguera, Rivane Neueschwander and Francis Alÿs throughout 2010 at Sala Verónicas in Murcia might well be summed up by a monstrous mandate: "Bring that stuff in Here!" Which is to say, keep on contaminating this false paradise."
Cuauhtémoc Medina, Curator.

Project Management: Carlos Urroz
Production: PAC Murcia is an initiative of the Department of Education and Culture of the Región de Murcia through its Directorate General of Fine Art and Cultural Goods.
Organiser: Department of Culture & Tourism, Region of Murcia

Cuauhtemoc Medina and Yaiza Hernández (CENDEAC director) in conversation with Jimmie Durham
January 22nd 2010 at 6:30 pm. CENDEAC, Murcia.
Guided tours on Saturdays at 12 noon:
Reservations by phone on 968 21 90 99 or info@aldabacongresos.com