Sarah Vanagt's existential work hovers somewhere between the cradle and the grave - and centres specifically on these two extremes. The exhibition Pocket Cinema, bringing together a range of her older and more recent work, including a series of recent cibochrome prints of graveyards. For GuestRoom # 10 the work of a current 'candidate laureate' of the Higher Institute of Fine Arts is combined with that of an artist who has since gone on to develop his or her artistic practice. The first pair of artists are Niklaus Ruegg and Leon Vranken. 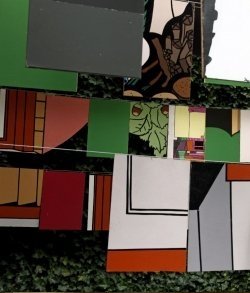 The Higher Institute of Fine Arts (HISK) is one of Belgium's most distinguished institutes for the arts. It is an international platform for young international artists whose development is closely followed by curators, critics and gallerists with a keen interest in emerging talent. The HISK Guestroom will focus on a different pair of artists every two weeks. Domein curator Roel Arkesteijn selected six pairs of artists who studied at the HISK. The work of a current 'candidate laureate’ is combined with that of an artist who has since gone on to develop his or her artistic practice. The first pair of artists are Niklaus Rüegg and Leon Vranken.

The slide-show The Book D was made between 2008/ 2009 in Switzerland and Belgium. It tells the story of an artist’s dream. The imagery is basically inspired by comic strips.
The installation Leaf and Tiger was shown in its full scale at HISK, Gent. The version in Sittard  is adapted to the size of the courtyard it is built in.
Leaf and Tiger are 338 cut-up parts of former paintings in wood from the years 2001-2007.
Leon Vranken (1975, Maaseik, Belgium)

Leon Vranken connects in his installations pure geometric shapes with everyday objects which he gives a different function. He causes a subtle shift in our perception of reality. His work evokes confusion and uncertainty with the viewer. It causes existential doubt about the authenticity of what we see and about the causal impact of the act on the environment.

In her brief artistic career, young Flemish filmmaker and artist Sarah Vanagt (Bruges, 1976) has gained a reputation for her poetic and poignant documentary films, video installations and photos. She studied history at the universities of Antwerp, Sussex and Groningen, and film at the National Film and Television School in London.

Vanagt’s existential work hovers somewhere between the cradle and the grave – and centres specifically on these two extremes. In her first works, Vanagt focused her lens on a post colonial, war-torn Africa. The documentary Begin Began Begun (2004) is filmed in the border zone of Congo and Rwanda. We see a village teacher before a class of school children, struggling with how to deal with the commemoration of the genocide that took place a decade earlier. Using history books in which, out of fear, all mention of the mass murder is scrupulously avoided, what is he to do? In Les Mouchoirs de Kabila (2005), shot in the same border area, Vanagt films children among the ruins of lava-inundated Goma. They play at being border guards, bury the dolls they still have left, and make believe they are news readers. Through the world of play, and aided by their imaginations, the children attempt to come to terms with their reality. A reality dominated by memories of the horrors of the civil war. The artist’s pared-down, sober treatment of unsettling subject matter lends it added depth and dimension.

The exhibition in Museum Het Domein, bringing together a range of older and more recent work by Vanagt, including a series of recent cibochrome prints of graveyards. Pocket Cinema is the artist’s first museum solo. The exhibition is presented as part of the International Photography Biennale in Luik and the Euregio.

Museum Het Domein
Kapittelstraat 6 6131 ER Sittard The Netherlands
Opening hours:
from Tuesday through Sunday from 11 am till 5 pm.
Admission
Adults: € 4,00
Discount cards: € 2,00
Groups of a minimum of 15 persons: € 3,00
Free admission:
Youngsters up to 18 years, people with a Museumjaarkaart, Friends of Het Domein and everybody on the first sunday of the month