Int. Stage-Day. Finnish filmmaker, photographer, and video artist is known mainly for complex multi-screen narratives that reveal the fragile inner life of her protagonists, as well as the tenuous line separating fantasy from reality. Her work is presented as split-screen projections on multiple panels, which has the powerful effect of dramatising a psychological perception of space and time for the viewer. 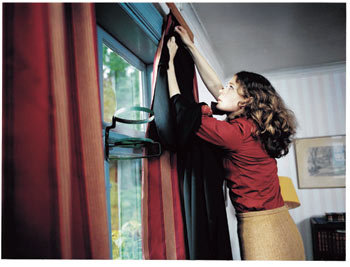 Internationally acclaimed Finnish filmmaker, photographer, and video artist Eija-Liisa Ahtila is known mainly for complex multi-screen narratives that reveal the fragile inner life of her protagonists, as well as the tenuous line separating fantasy from reality. Using the visual language of cinema, her work is presented as split-screen projections on multiple panels, which has the powerful effect of dramatising a psychological perception of space and time for the viewer.

Eija-Liisa Ahtila's film installations experiment with narrative storytelling, creating extraordinary tales out of ordinary human experiences. Her sharp, vivid film and video installations are concerned with the psychological impact of interpersonal conflict, and are sensitively attuned to the intricacies and ambiguities of human emotion and romantic discord.

Ahtila refers to her work as "human dramas," fictional narratives drawn from her own observations and experiences and from long periods of research. Her installations fuse urgency and detachment, documentary realism and cinematic fantasy. The many unsettling emotions in her work—intimacy, loss, and repression—are leavened by a gentle humour and absurdity, and are presented in dynamic environments, which engage the viewer both physically and intellectually.

Taking its title from a "slug line" or master scene heading found in screenplays, INT. STAGE–DAY is the artist's largest exhibition ever assembled outside Europe, spanning almost two decades of art and filmmaking. The works on view include Today (1996-1997), which reflects upon the death of a grandfather as viewed and mourned by three family members on three screens; The Hour Of Prayer (2005), an exploration of grief and loss after the death of a dog—beginning in a winter storm in New York and ending in Benin, West Africa eleven months later; The Present (2001), a depiction of women who have developed a psychosis, shown in five short looped episodes on five separate monitors; The House (2002), a haunting three-screen film about madness and a woman who hears voices; Consolation Service (1999), a deft articulation of a bitter divorce culminating in a consolation service—the final giving up of the relationship; and finally, the dazzling and complex multi-screen Where is Where? (2008), presented at The Darling Foundry, which considers the emotional trauma of war on civilian victims, centering on a Finnish poet (played by Kati Outinen) and her efforts to morally untangle the real life incident of two Algerian boys who murdered a French playmate during the Algerian war of independence in the 1950s.

Born in Hameenlinna, Finland in 1959, Eija-Liisa Ahtila studied film in Los Angeles and London. Her works have been exhibited at major museums across the world, such as Tate Modern (London), Hamburger Bahnhof (Berlin), Jeu de Paume (Paris), and MoMA (New York).

DHC/ART would like to thank the Embassy of Finland in Ottawa and the Ministry for Foreign Affairs of Finland for their generous support.