The exhibition highlights the key role these three individuals played in the re-evaluation of El Greco's work around 1900. The show also looks at the workings of his studio and offers a fascinating overview of El Greco's artistic development via a selection of outstanding paintings, including the Lagrimas de San Pedro and the stunning El Expolio. The highlight of the show is El Greco's final series, El Apostolado, his artistic testament. 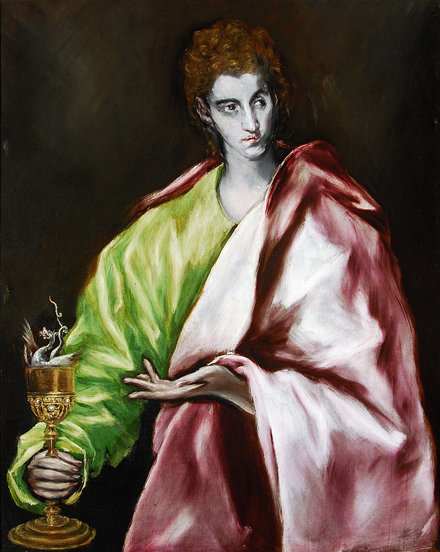 On the occasion of the Spanish presidency of the Council of the European Union, the Centre for Fine Arts presents El Greco: Domenikos Theotokopoulos 1900, an exhibition of over 40 works by El Greco. The exhibition throws light on the European career and complex artistic evolution of this unique artist.

Universally regarded today as one of the founders of the Spanish School of painting, El Greco has not, however, always enjoyed that lofty status: despite his successful career, his dramatic, expressionist style was viewed with mixed feelings by his contemporaries. Tastes, moreover, changed around the time of his death in 1614: Europe fell under the spell of the naturalism of the Caravaggesque style, which sought to depict reality as it was and was thus poles apart from El Greco's unique Mannerist talent. After his death El Greco's work soon went out of fashion and fell into obscurity. His art was suddenly rejected as old-fashioned.

Things only changed in the early 20th century, when the modern artistic avant-garde restored his reputation. This rediscovery was due to three key figures of the Spanish cultural scene of the time: the art historian Manuel Bartolomé Cossío (who published a monograph devoted to El Greco in 1908), the Marqués de Vega Inclán (who established a museum in his honour in Toledo in 1910), and the photographer Mariano Moreno. The painter's fame soon flourished again and he has been recognised ever since as an artistic genius.

El Greco: Domenikos Theotokopoulos 1900, curated by Ana Carmen Lavín Berdonces and José Redondo Cuesta, highlights the key role these three individuals played in the re-evaluation of El Greco's work around 1900. The exhibition also looks at the workings of his studio and offers a fascinating overview of El Greco's artistic development via a selection of outstanding paintings, including the Lágrimas de San Pedro and the stunning El Expolio. The highlight of the exhibition is El Greco's final series, El Apostolado (the twelve apostles), his artistic testament: an astonishingly modern series, with its free forms and extraordinary use of colour. The series includes a number of unfinished canvasses, which reveal aspects of the artist's masterly technique.

Most of the works in the exhibition come from the Museo del Greco, but it also includes works on loan from the Patrimonio Nacional, the Museo Nacional del Prado, the Archidiócesis de Toledo, and the Museo de Santa Cruz, Toledo.

El Greco is seen as one of the ancestors of expressionism and cubism. He developed an individual style and distinctive aesthetic principles, which make it impossible to pigeonhole him.

Imagination and intuition are at the heart of El Greco's style. He disregarded classical principles such as measure and proportion and did not hesitate to circumvent the laws of nature in order to create a more dramatic effect. He painted exceptionally long, slim figures and elongated compositions. Instead of faithfully depicting reality, he sought to touch viewers' hearts directly via the powerful spiritual emotion of the painting.

His style is also characterised by its deep hues and its distinctive use of light.

El Greco (1541 – 1614) was a painter, sculptor, and architect who lived in the period of the Spanish Renaissance. Born Domenikos Theotokopoulos in Crete, he became known in Italy as El Greco ("The Greek").

There is little documentary evidence about his background and early years. He began his career in a local artistic workshop in Crete that specialised in the production of icons. Crete at this time came under the control of the Republic of Venice, which led to an intensive artistic exchange. Many Greek artists travelled to Venice; El Greco set out to try his luck there in 1567. In 1570 he moved to Rome, where he worked for Cardinal Alessandro Farnese. In 1572 he was admitted to the Roman academy for painters, the Accademia di San Luca, and probably established a studio of his own, producing his first commissioned works.

During his stay in Italy his painting style developed under the influence of Mannerism and the Venetian Renaissance. Michelangelo and Raphael were already dead, but their example left little scope for innovation and was oppressive for young artists. El Greco, however, determined to leave his own mark, stood up for his individual ideas, vision, and style. This attitude made him controversial: although he was a respected artist, he also came in for a lot of criticism.

In 1577 El Greco moved to Toledo in Spain, where he was to live and work until his death. It was in Toledo that he received a number of his most important commissions and painted his most celebrated paintings. The years from 1596 to 1614 were a golden age for El Greco and his studio. He was at the height of his powers and carried out major commissions for a variety of religious institutions, such as the altarpiece for the Colegio de la Encarnación in Madrid. He remained active until his death in 1614.

In cooperation with: Embassy of Spain

In the context of the Spanish presidency of the European Union