This large-scale exhibition explores five primary themes that have engaged the South African artist over the last 3 decades through a comprehensive selection of his work from the 1980s to the present. Dealing with subjects as sobering as apartheid and colonialism, Kentridge often imbues his art with dreamy, lyrical undertones or comedic bits of self-deprecation. Best known for his stop-motion films of charcoal drawings, the artist also works in prints, collage, sculpture, and the performing arts. Contemporary: Yin Xiuzhen presents her large-scale sculpture, Collective Subconscious. 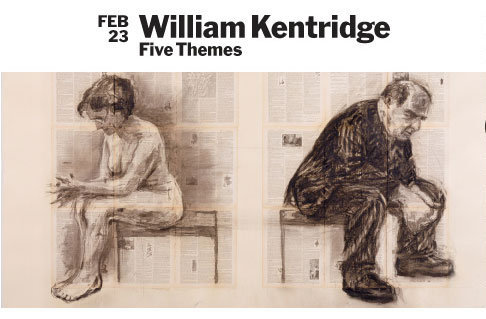 This large-scale exhibition of the work of the internationally renowned South African artist William Kentridge (b. 1955) spans nearly three decades of this remarkably prolific artist’s career, with an emphasis on projects completed since 2000, many of which have never before been publicly exhibited in the United States. Combining the political with the poetic, Kentridge’s work has made an indelible mark on contemporary art. Dealing with subjects as sobering as apartheid and colonialism, Kentridge often imbues his art with dreamy, lyrical undertones or comedic bits of self-deprecation, making his powerful messages both alluring and ambivalent. Perhaps best known for his stop-motion films of charcoal drawings, the artist also works in prints, collage, sculpture, and the performing arts, opera in particular. This exhibition explores five primary themes that have engaged Kentridge over the last three decades through a comprehensive selection of his work from the 1980s to the present. Included are works related to the artist’s staging and design of Dmitri Shostakovich’s The Nose, which premieres at The Metropolitan Opera, New York, in March 2010.

At MoMA, the exhibition includes many works exclusive to this presentation. Alongside key loans from around the world, the presentation at MoMA underscores the Museum’s interdepartmental commitment to the artist’s work by revealing both the breadth and depth of holdings in its collections.

The exhibition premieres at the San Francisco Museum of Modern Art (SFMOMA) from March 14 through May 31, 2009, and travels to the Modern Art Museum of Fort Worth, Texas, the Norton Museum of Art, West Palm Beach, Florida, and select venues in Europe. The exhibition is accompanied by a catalogue.

William Kentridge: Five Themes is organized by the San Francisco Museum of Modern Art and the Norton Museum of Art.
The MoMA presentation is sponsored by BNY Mellon.
Major support is provided by the Mimi and Peter Haas Fund and by Sue and Edgar Wachenheim III. Additional funding is provided by Jerry I. Speyer and Katherine G. Farley, Marie-Josée and Henry Kravis, Anna Marie and Robert F. Shapiro, and Marnie S. Pillsbury.
Generous support for the development of the exhibition was provided by the Koret Foundation with additional support from the National Endowment for the Arts.

Yin Xizuhen (Chinese, b. 1963) works primarily in site-specific installation and sculpture, formats she has been engaged with since the early 1990s. Her work addresses issues on both an environmental scale and a personal one, often employing quotidian materials including found textiles. Projects 92 presents her large-scale sculpture, Collective Subconscious (2007), which is composed of a bisected minivan connected by a long tube covered in a quilt made of found garments. The public is invited inside this transformed conveyance, where they will find a welcoming environment with low stools and soft pop music, forming a kind of cozy refuge within the white walls of the gallery, making it a place for conversation and discussion.

This exhibition is organized by Sarah Suzuki, The Sue and Eugene Mercy, Jr., Assistant Curator of Prints and Illustrated Books, The Museum of Modern Art.