The Artist's Studio Inside-Out. The exhibition presents an illuminating look at how some of the most compelling artists of today have demystified, remystified, and reconsidered art production spaces. Large installations, films, multi-channel video projections, photographic light-boxes, and life-sized fabrications of artists' studios that explore the creative process. The studio is used as a focus point to explore the nature of creativity; aspects of chance; and how artists have used it as a source of inspiration for their work. With William Kentridge, Bruce Nauman, Tacita Dean, Andrea Zittel, Fischli and Weiss, among others. 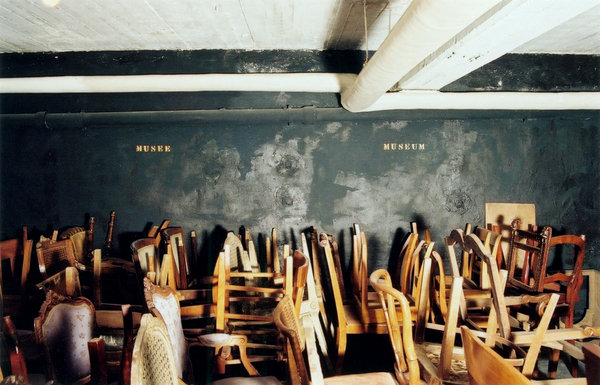 This winter, the Museum of Contemporary Art (MCA), Chicago, premieres Production Site: The Artist’s Studio Inside-Out, an exhibition that uniquely examines the artist’s studio as subject. The exhibition presents an illuminating look at how some of the most compelling artists of today have demystified, remystified, and reconsidered art production spaces. Large installations, films, multi-channel video projections, photographic light-boxes, and life-sized fabrications of artists’ studios that explore the creative process are on view February 6 through May 30, 2010.

"Production Site presents work that documents, depicts, reconstructs, or otherwise invokes that space, it reveals how the studio provides for the intersection of research, experimentation, production, and social activity, and how our romantic notions of the artist’s studio both celebrate and constrict its role in contemporary art-making,” says Pritzker Director Madeleine Grynsztejn. The studio is used as a focus point to explore the nature of creativity; aspects of chance; and how artists have used it as a source of inspiration for their work.

MCA Curator Dominic Molon says Production Site “brings a tradition of representing the artist’s studio since the Renaissance into the present day. It provides a rare opportunity to see the studio – a space typically kept private by the artist for contemplation, conceptualization, and production – through the eyes of the artists themselves.”

Production Site features a number of major film and video works including William Kentridge’s 7 Fragments for Georges Méliès and Day for Night (2003), a self-reflexive video work showing the artist in his studio creating the same work that appears onscreen. Bruce Nauman, who has actively incorporated his studio in his work since the late 1960s, observes the unexpected chance activities that transpire in the studio's off-hours in his video MAPPING THE STUDIO II with color shift, flip, flop & flip/flop (Fat Chance John Cage) All Action Edit (2001). Tacita Dean’s Section Cinema (Homage to Marcel Broodthaers) (2002) was shot in a basement room in Düsseldorf once used as a studio by Belgian conceptual artist Marcel Broodthaers. The 13-minute film uncovers the remains and memories resonating in the cluttered abandoned space. Chicago artist Justin Cooper’s installation, Studio visit, features drawings and a single-channel video that transforms a visit to the studio into a visceral, physically intense experience through a highly mediated use of a point-of-view perspective and animalistic vocalization.

For the front lobby wall, the MCA has commissioned Chicago artist Deb Sokolow to create a new work that evolves throughout the duration of the exhibition. Sokolow, known for her humorous and intricate interior dialogue and complex maps and networks, features a floor-plan of her studio and details fictional and actual activity within the space and in the surrounding neighborhood through the use of text and drawings. Work by another Chicago artist, internationally renowned Kerry James Marshall, is featured in Production Site. His photograph, The Black Artist (Studio View) (2002), extends the tradition of the artist depicting him- or herself in the studio space. In this work, Marshall is seen reflecting on the major painting, 7am Sunday Morning (2003) -- which is also in the exhibition -- for its depiction of the urban Chicago neighborhood where his studio is located. His most recent work, Untitled (Painted) (2009), addresses the historical lack of representations of African Americans in the studio.

Internationally acclaimed artist Andrea Zittel presents works that reflect on the surroundings of her studio in Joshua Tree, California, and the daily routines that take place there. Her installation Rough Furniture: Energetic Accumulator Assortment III (2008) is a focal point in the exhibition, commenting on how the studio functions as a ‘staging site’ for the works. Peter Fischli and David Weiss’s Untitled (2005) recreates a disheveled studio made of 105 objects carved out of polyurethane. The installation, which includes objects ranging from a couch, a stool, a helmet, a broom, a hot plate, a coffee maker, and 5 pairs of boots, meditates on the studio as both a real space but also one that has been constructed in our imagination by works of art, film, fiction, and other representations.

Chicago born, now Los Angeles-based Amanda Ross-Ho’s Frauds for an inside job (2008) presents studio walls excised from her former work that became both pictorial and sculptural art objects. Ryan Gander’s installation features three parts from the eleven-part Felix provides a stage (2008) that presents large-scale photographs of the artists’ assistant positioning paper in the studio in preparation for the creation of A sheet of paper on which I was about to draw, as it slipped from my table and fell to the floor (2008) within which the sheet of paper alluded to in the title is etched, thus reenacting a fleeting moment of beauty that the artist observed in his studio.

A performance-based work by Nikhil Chopra combines approaches associated with theater, portraiture, landscape drawing, and photography to chronicle the dynamics of the artist's studio. Additional artists in the exhibition include Rodney Graham and Chicago sculptor John Neff.

Production Site is organized by MCA Curator Dominic Molon and a catalogue accompanies the exhibition.

Production Site is presented as part of Studio Chicago, a year-long collaborative project that focuses on the artist’s studio through October 2010. Through city-wide exhibitions, talks, publications, tours, and research, participating organizations celebrate the working artist and reveal their sites of creative production from historical and contemporary perspectives. With concepts ranging from the “studio as muse,” “virtual studios,” “street as studio,” and “gallery as studio,” Studio Chicago invites participation from artists and the art-curious. Core Studio Chicago partners include: the MCA, Chicago Department of Cultural Affairs, Columbia College Chicago, Depaul University Art Museum, Gallery 400, Hyde Park Art Center, the School of the Art Institute of Chicago, and threewalls.

The Museum of Contemporary Art, Chicago (MCA) is located at 220 E. Chicago Avenue, one block east of Michigan Avenue.
The museum and sculpture garden are open Wednesday through Sunday from 10 am to 5 pm and Tuesday from 10 am to 8 pm. closed on Monday.
Suggested general admission is $12 for adults and $7 for students and seniors.
Children 12 years of age and under, MCA members, and members of the military are admitted free.
Enjoy free admission every Tuesday