This is the first U.S. retrospective for the Belgian artist and the most comprehensive presentation of his work to date, with approximately 75 key paintings from 1985 to the present. Influenced by the Northern European painting tradition as well as by photography, television, and cinema, the artist blends filmic techniques with a mastery of painting to explore issues of history, memory, and the mass media. 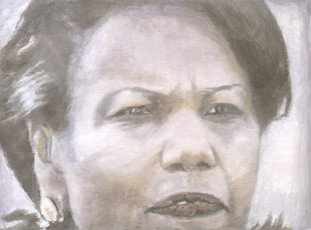 The first U.S. retrospective of the work of Belgian contemporary artist Luc Tuymans—and the most comprehensive presentation of his work to date—will be on view at the San Francisco Museum of Modern Art (SFMOMA) from February 6 through May 2, 2010, in its only West Coast presentation. Jointly organized by SFMOMA and the Wexner Center for the Arts, Luc Tuymans features approximately 75 key paintings from 1978 to the present and reunites works from important series as initially set out by the artist, thus restoring intended dialogue among the works.

The exhibition debuted at the Wexner Center in September 2009. Following its SFMOMA presentation, Luc Tuymans will travel to the Dallas Museum of Art (June 6 to September 5, 2010), the Museum of Contemporary Art in Chicago (October 2, 2010, to January 9, 2011), and the Centre for Fine Arts, Brussels (February 10 to May 8, 2011). The retrospective is cocurated by Madeleine Grynsztejn, Pritzker Director of the Museum of Contemporary Art, Chicago (and former SFMOMA Elise S. Haas Senior Curator of Painting and Sculpture), and Helen Molesworth, Maisie K. and James R. Houghton Curator of Contemporary Art at the Harvard Art Museum (and former chief curator of exhibitions at the Wexner Center for the Arts). A definitive catalogue accompanies the retrospective.

Luc Tuymans (born 1958) is considered by many to be one of the most significant painters working today, and his distinctive visual style and approach to issues of history and memory have influenced an entire generation of younger artists. Interested in the aftereffects of some of the most traumatic events of the last and present century and their representation in the mass media, Tuymans uses a muted palette to create paintings that are at once sumptuous and subtle, enigmatic and disarmingly stark.

Born and raised in Antwerp, where he continues to live and work, Tuymans draws on the historical traditions of Northern European painting as well as photography, cinema, and television. He appropriates images from a variety of sources and makes use of cropping, close-ups, framing, and sequencing to offer fresh perspectives on the medium of painting as well as larger cultural issues. Whether interiors, landscapes, or figural representations, his works might initially suggest relatively innocuous depictions of everyday life—but there is almost always another meaning lurking beneath their surfaces. Like veiled memories, Tuymans's paintings oscillate between coherence and illegibility, challenging viewers'certainty about not only what they are looking at but also how they should be looking.

Perhaps best-known for his early work on the Holocaust, the artist has turned more recently to such topics as the postcolonial history of the Democratic Republic of the Congo, the dramatic turn of world events after 9/11, and the role of institutional religion in an increasingly secular world. These series have led Tuymans to a sustained investigation of the realms of the pathological and the conspiratorial. Throughout, he has remained committed to representing the unrepresentable in order to make viewers recognize their role as spectators—and often unwilling accomplices—to history.

"Tuymans is a crucial figure in contemporary art, yet he remains relatively unknown to broader audiences in the United States," says SFMOMA Director Neal Benezra. "SFMOMA has a long track record of presenting important artists at pivotal moments in their careers, and we are thrilled to partner with the Wexner Center to bring this timely exhibition of Tuymans's work to San Francisco and to other museums nationwide."

"Without question, the time is ripe for an in-depth retrospective of Tuymans's work in this country," says Wexner Center Director Sherri Geldin. "We are pleased to collaborate with SFMOMA on this exhibition, which is certain to reveal new insights into the creative, intellectual, and political impulses behind the artist's utterly unique, often serial approach to painting."

The exhibition at SFMOMA reconstructs the early genesis of the artist's distinctive process, highlighting the way in which he moves fluidly from one painting to the next. Because Tuymans experimented with filmmaking early in his career, his strategy draws from theories of filmic montage: one image links to another, and additional meaning is conveyed by the pieces' adjacency. This retrospective re-creates the original installations of four groups of interrelated paintings—At Random, Der Architekt, Mwana Kitoko: Beautiful White Man, and Proper—which the artist intended to be hung in a particular order.

Tuymans treats genres including still life, landscape, and portraiture with the same scale and gravity once reserved for grand history painting. Indeed, Tuymans may be said to have reinvented history painting for the present day, using moments from the recent past to shed light on the fragile nature of events. In depicting contemporary scenarios through this traditional painting genre, he also explores disengagement from current realities and the ways in which the contemporary experience is often dramatically mediated by both technology and longstanding cultural narratives.

The artist's series At Random explores the subject of perception and disorienting shifts in visual understanding. Shapes and outlines in these paintings emerge slowly from hazy backgrounds. Sometimes the title of a work helps bring a recognizable object into focus, as in the case of the The Doll (1994), which first appears to be a misty Northern landscape. It's only after reading the title and spending time in front of the canvas that it reveals more. The pictures that make up At Random seem exactly that: arbitrary and pulled from the stream of images one constantly encounters. A girl's leg (in The Leg [1994]), a glimpse through a window (in Self-Portrait [1994])—each may seem insignificant and normally quickly forgotten, but perhaps each conceals some secret within.

Der Architekt (The Architect), Tuymans's series devoted to the Holocaust, is the artist's most comprehensive treatment of this recurring topic in his oeuvre, yet the viewer is unlikely to come away with a better understanding of the atrocities that the word encompasses. This reflects Tuymans's larger point—that certain events defy representation.These mostly monochromatic canvases set up a visual correlation between the Nazi obsession with Aryan purity and the depravity of their actions. Himmler (1998) draws on an official photographic portrait of SS official Heinrich Himmler, who oversaw the concentration camps. The details of his face, however, have been obscured, leaving only an impenetrable blur. A rich and significant image, Gaskamer (Gas Chamber [1986]) at first seems to be a rough sketch of a nondescript room until one reads the caption. Only then do the dots on the ceiling register as showerheads. By comparison, K.Z. (1998) is perhaps clearer, as the title is an abbreviation of the German term for concentration camp. But it too turns out to be misleading, showing only a portion of a camp specifically designed to hide its actual conditions from foreign inspectors.

In the series Mwana Kitoko: Beautiful White Man, Tuymans confronts the violent legacy of his native Belgium's involvement in the Congo, which was a Belgian colony from 1908 to 1960. This suite centers on the postcolonial situation in the Democratic Republic of the Congo and the shadowy networks of power linked to the assassination of Patrice Lumumba, the first democratically elected prime minister of that country. The Mission (2000) depicts the place where both Lumumba and his political rival Joseph-Désiré Mobutu were educated. Chalk (2000) references a story Tuymans heard about a police officer who pulled two teeth from Lumumba's mouth after his death. Sculpture (2000) brings this historical narrative into the present by depicting a life-size painted wood sculpture, a relic of the colonial era that Tuymans encountered by chance in a restaurant in Antwerp.

The retrospective also gathers a selection of paintings from Tuymans's post-9/11 series entitled Proper, which includes his unmistakable painting of Condoleezza Rice, The Secretary of State (2005). Looking at American society and the Bush administration, Proper explores the artist's view of a country struggling to right itself and, in the process, clinging to propriety in order to maintain an image of strength and normalcy. Ballroom Dancing (2005) portrays the newly revived phenomenon of its title, conveying the trappings of old-fashioned romance and gender roles in an image based on a photograph of the Texas Governor's Ball. The odd observation angle of The Parc (2005) suggests the view from a security camera and so exposes the way surveillance has permeated daily life. Billowing clouds of dust in Demolition (2005) recall the destruction of 9/11 but can also be seen as a metaphor for the confusion that prevents events from being seen clearly.

In addition, the exhibition includes works from Tuymans's Der diagnostische Blick (The Diagnostic View) series, which he based on images found in a German physician's guide to physical manifestations of various diseases and ailments. With these works, Tuymans draws attention to the medium of painting itself, emphasizing the tensions between the handcraft of painting and the mechanical eye of photography.

The exhibition catalogue ($60 hardcover; $35 softcover)—coproduced by SFMOMA and the Wexner Center for the Arts in association with Distributed Art Publishers, Inc.—forms the most comprehensive volume on the artist to date, with original essays by Helen Molesworth; Bill Horrigan, director of the Media Arts Department at the Wexner Center for the Arts; Joseph Leo Koerner, professor of art history and architecture at Harvard University; and Ralph Rugoff, director of The Hayward at Southbank Centre in London; as well as a joint introduction by the co-curators Grynsztejn and Molesworth. The extensive illustrations will be accompanied by text entries that illuminate the painter's primary subjects and themes.

Luc Tuymans is organized by the San Francisco Museum of Modern Art and the Wexner Center for the Arts, The Ohio State University, Columbus. Generous support for the exhibition is provided by Martha and Bruce Atwater. Additional support is provided by Carla Emil and Rich Silverstein, and Flanders House, the new cultural forum for Flanders (Belgium) in the United States.