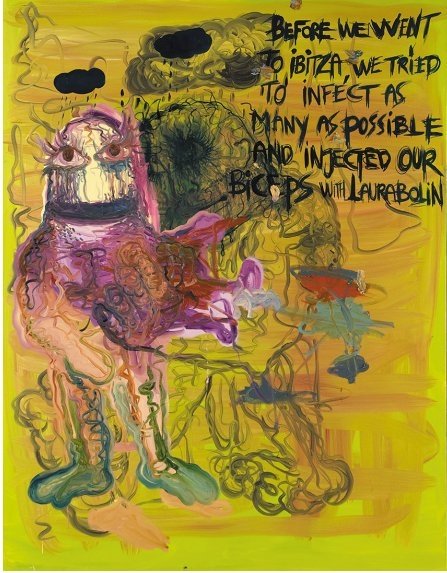 The Astrup Fearnley Museum of Modern Art is honoured to have the privilege and the pleasure to organize the first retrospective exhibition of works by Bjarne Melgaard (b. 1967).

In the heyday of mid-1990s neo-conceptualism, Bjarne Melgaard enters the art scene with expressionistic and chaotic paintings, sculptures and installations full of desire and fearful longings staged somewhere in between fiction and reality. Mastering the line of drawing and the architecture of installation, he takes spectators into a labyrinth of layered and complex narratives, in which subjects are excessive and destructive, and where strokes and splashes take on the shape of otherworldly phenomena, often to the soundtrack of outrageous and violent words. During the last fifteen years, Melgaard has created multiple worlds while breaking down artistic boundaries and questioning the limits of morality. When his visions are exhibited in galleries and museums, they tend to provoke extreme reactions. In this retrospective exhibition a broad selection of his works are included across a spectrum of media – drawings, paintings, sculptures and installations – to give the audience an insightful experience of his artistic project, and a deeper understanding of what motivates his complicated and dark scenarios.

Melgaard's art belongs to a long tradition of expressionism that can be traced back to Edvard Munch – Melgaard's spiritual and stylistic mentor – and to the founding of Die Brücke in Dresden in 1905. An instinctive and genuine painter, Bjarne Melgaard adopts expressionist language in his works – or, perhaps more accurately, he has become adopted by this introspective style. His images grow from that emptiness where his artistic desires and inner demons meet. When creating his works, he will jump on the first spontaneous idea he gets, without preconception. He developed his characteristic formal language in the mid-1990s, and this period, in particular, reflects the real pleasure Melgaard takes in painting and the feelings and sensuality that go into each line – drawn or painted – sometimes taking his works to the verge of pure abstraction. Most of the time, however, we encounter male subjects within a homo-erotically charged environment. It is a complex, even chaotic, pictorial world where figures and objects seem to metamorphose in indefinable ways from one state to another. Melgaard invents fantastical scenes, or rather, he "renders visible" dreams and fantasies, as if trying to make them real. To emphasise the connection to an exterior reality, he sometimes incorporates images and photographs cut out from magazines into his works. These clippings serve to anchor them in a given moment in time and provide each work with a fundamental identity. In addition, Melgaard frequently makes use of text – fragmented sentences, exclamations and singular words – to balance the graphic, visual element with the phoneme, the small, segmental units of sound. Together, words, paintings, drawings, and sculptures become like one overarching installation, which seems to submerge and overwhelm the spectator in their own particular time and space.

His works are animated by a surrealistic impulse and are loaded with punctual symbolic references almost always explicitly sexual and violent in nature. The same references appear again and again throughout his works, as if an obsession. Animals like dogs, monkeys, penguins, octopuses and kangaroos are often portrayed together with black holes and penises. The artist is repeatedly telling the spectator and the world who he is, a homosexual and an outsider, while at the same time taking on different transient identities – Casanova, Rob Bo'bel, Bernard St. Summiere, Raoul – in his attempt to challenge repressive social conventions, expectations and prejudices. It is an attempt to stage autobiographical fiction, and to approach absolute freedom.

Although we can talk of Melgaard's oeuvre in terms of different stylistic periods corresponding to a greater or lesser degree to various chapters in his life, his art is a continued, and ongoing, flow of real and imagined narratives. All elements of his works, whether photographs, drawings, paintings, sculptures, installations, films, books and catalogue, tell us the same story of exclusion and invoke the same quest for the individual's total freedom. Melgaard situates himself within a Nietzschean discourse of instincts and passions, morality and normality.

An exhibition catalogue has been published with texts by Gunnar B. Kvaran, John Kelsey, Jan Hoet, Hans Ulrich Obrist and Hanne Beate Ueland.