The Works. Through the use of craft, performance, video, sculpture, and photography, he explores displacement, dislocation, misidentification and misconceptions, in relation to race, gender, identity and sexuality. 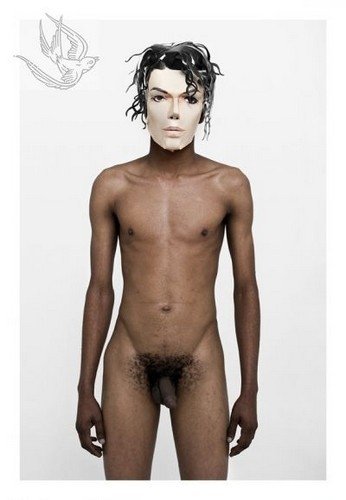 This is the first in a series of solo exhibitions at FRED, during 2010, of work by artists of, and from, the African Diaspora.

We have been looking at work by African artists, African-American artists, and artists of African descent based in Europe; and at the socio-political issues facing them, including those of race, gender and sexuality in post-colonial cultures, and immigrant sub-cultures in the West. Having recently visited studios, curators, writers, and galleries in a number of African countries, it is our belief that some of the most interesting work being made today, comes from, or derives from, such places. Their work explores notions of identity, nationhood, ethnicity, sexuality, religion or belonging – and work within an artistic framework alongside one of race-based dynamics and differences. And many have not shown in the UK previously.

Athi-Patra Ruga is one such artist. Through the use of craft, performance, video, sculpture, and photography, he explores displacement, dislocation, misidentification and misconceptions, in relation to race, gender, identity and sexuality. But sometimes these issues are separate, and not straightforward. For example, the emerging class, in South Africa, called Black Diamonds, are the new affluent black elite. Athi sees them as parasitic; and nothing more than the nouveau riche the country has seen before, because they aren’t helping to solve any of the big problems – such as poverty. Trickle down economics is not working. “Its all Gucci and Ferrari's set against a picturesque back drop of shacks and illiterate children.”

His concern is the balance of power, the struggle, between the artist and the subject - and the viewer. The works are confrontational. His is the autonomous body against the sovereign state. And it is political concerns, such as these, that are at the heart of his practice. His viewpoint is that of a gay Xhosa man living in South Africa - Xhosa folklore castes a big shadow over his life, his up-bringing, personal relationships, and, to a large extent, his work. The exhibition comprises tapestries and photographs, which explore the boundaries between fashion, performance and photography – as well as notions of taste, and acceptance, and understanding, and convention, and the status quo.

His shift into performance has seen him importing this concept of clothing into energised situations, informed by a razor-sharp sense of time and place. His sojourn through Switzerland in his Injibhabha costume was calculated to draw comparisons with a controversial poster by the Swiss People’s Party (SVP), which depicted a black sheep being booted off the Swiss flag by three white sheep. Spotting a key opportunity to point-up European xenophobia, Ruga put himself in to the clean and regularised city-scape of Berne in his aberrant costume for a work called, Even I Exist in Embo: Jaundiced Tales of Counter penetration.
Dressed in his Injibhabha costume,

On his early work:
Above all I believe that the work developed out a need to illustrate arguments about the body in the context of the post-industrial (even post-urban). By utilising the medium of fashion I wanted to explore disembodiment with regards to the result of one not being aware of how things are made… in the form of craft work as it is process-based - this requires discipline - and the body plays a big part in realising this discipline… A form of disembodiment befalls one’s senses when they don’t pay attention to the process of things, how things are done. One eats sushi without the full grasp of the process (of preparing it), people rob people without knowledge of how things are acquired… I feel that making, and being conscious of making is a discipline.

On the topics of costume and performance:
‘One has to be a mirage to tackle history and put it in another context to get to the point… The costume plays that role in performance.’

On the issue of contemporary ‘hyper-masculinity’:
‘The trick I play with the “act” is to cast attention to the idea of hyper-masculinity… The blue boy is an icon of the Rococo movement as it is layered with the irreverence, a frivolity that characterizes the aesthetics of hip-hop and the spirit of the Rococo movement. I “pimped it out” by performing the act, forcing the two together. The use of the phallus is in direct reference to the groping of the balls, the auto-exotic visions of the black phallus etc. The Lamborghini Gallardo is featured in Akon’s “Smack That” promo video. The lyrics play into the whole “body architecture” (concept) and the ownership of another individual as a “ride”’.

On his latest body of work, '...of bug chasers and watussi faghags':
'The latest work to incorporate tapestries is "...of bugchasers and watussi faghags". Here the tapestries will be presented in both the modes that have been used before, for example the "found objects" that are then changed into an "otherwise" narrative. I am interested in the movement of people... forced movement especially.

'The most famous displacement of people in my time is, without doubt, the 1994 Rwandan genocide. And with detail to the exodus of the Tutsi, I embarked on researching the imagery that could have led to the drama. With the knowledge, a series of paintings done in the 40s by acclaimed German-African painter Irma Stern of the Watussi (an error in spelling for the Tutsi people) (provided) the material for subversion. [Stern] is a feature in the judgments made by post-colonial art critics as being purely a vampire/anthropological in how she approached "her native subject"... The same "gaze" cast on the Watussi by Stern was apparent in the way the colonial Belgians treated the Tutsi more favorably than the Hutus, by using imagery and propaganda...'

Athi-Patra Ruga was born in Umtata, South Africa, in 1984. His work has been included in “Beauty and Pleasure in Contemporary South African Art”, at Stenersen Museum, Oslo, and Guangzhou Trienalle, China, in 2008; and “Pret-a-Pratager”, at the IFA Gallery, Stuttgart. He was also represented in “Younger than Jesus”, a directory of over 500 of the world’s best artists under the age of 33, published by Phaidon.