The exhibition sets out to explore artistic responses to modernity from its original reformist intention as a socio-political movement aspiring to cultivate a universal language. About 130 works and projects by more than 30 artists and collectives establish a new 'mapping of the critique of modernity'. The works featured in the show are organised around three leitmotifs: the production of space, the concept of a universal language, and the politics of display. The works on display fundamentally challenge the conditions, constraints and consequences of modernity. 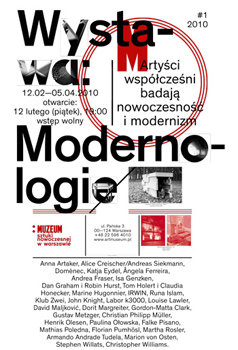 Over the past three decades, criticism on the project of modernity and its related content has not only generated countless activities in the academic field, but has also led to numerous works by artists researching modernity from their perspective and with their own means. A younger generation of artists is again increasingly addressing the legacy of modernity and modernism and the failure of the utopia associated with these terms. What has prompted contemporary artists to investigate modernity and modernism, its aesthetic manifestation? What are these artists' relationships to the promises and formal languages of modernity? How can this historical era even be critically reflected in and be subjected to a re-evaluation?

Modernologies sets out to explore artistic responses to modernity from its original reformist intention as a socio-political movement aspiring to cultivate a universal language. Diverging conceptions of modernity and the knowledge gained through postcolonial studies in recent years have led to the notion of 'multiple modernities'. Against this backdrop, this exhibition advocates neither a 'new formalism' nor a 'return to abstraction'. Neither is its aim to discover hitherto unknown or largely forgotten currents of modernism. On the contrary, the works on display fundamentally challenge the conditions, constraints and consequences of modernity. They expose ambivalences and attempt to develop new readings of the rhetoric of modernity and the concomitant grammar of modernism.

Modernologies unfolds a cartography of alternative viewpoints and narratives, lines of conflicts and unresolved contradictions. About 130 works and projects by more than thirty artists and collectives establish a new 'mapping of the critique of modernity'. The works featured in the exhibition are organised around three leitmotifs: 'the production of space', illustrated by a series of projects that explore the conflicts and correspondences between the architectural space of modernity and the social and political space; 'the concept of a universal language', taking into account modernism's ideology and its attempt to create a universal language in the form of abstract aesthetic symbols and forms; and 'the politics of display', illustrating how artists use the exhibition itself as a medium, in this way challenging the notion of the display and playing the role of quasi-curators. The three exhibition sections not only intertwine, establishing countless dialogues, but also find continuation in several works located outside these areas, or in transition zones.

The screening is part of the "Modernologies" exhibition.

In her 35-mm film installation Empty the pond to get the fish (2008), Runa Islam explores an abandoned modernist building by the Austrian architect Karl Schwanzer that was originally built for the 1958 World’s Fair in Brussels and later renovated to become the Museum of the Twentieth Century in Vienna. In this non-mimetic cinematography the artist recalls the traditions of abstract and structuralist filmmaking, and attempts to subvert the traditional dependence of cinematography on narrative. The visual narrative emerges from the movement of the camera as it writes out the sentence ‘Empty the pond to get the fish’—based on the exact typographical image of this sentence in the English edition of Robert Bresson’s Notes sur le cinématographe.

The screening is part of the "Modernologies" exhibition organised by Museum of Modern Art in Warsaw in cooperation with Museu d’Art Contemporani de Barcelona (MACBA).