Composit Visions is triggered by the multitude of influences entering the thinking, thought process and practices of an array of like-minded contemporary artists from around the globe working within the fascinating and resilient discourse surrounding the historical, formal and contemporary explorations within the field of the 'reductive' in general and 'reductive' painting in particular. Curated by Tilman et Petra Bungert, in collaboration with CCNOA, center for contemporary non-objective art, Bruxelles. 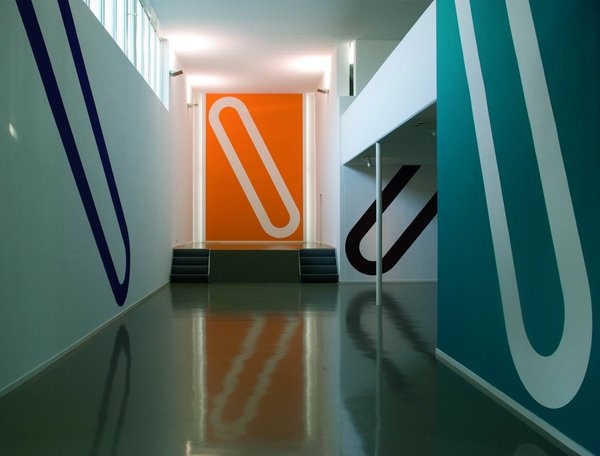 After 2step, minimalpop, Painted Objects, Double Exposure, A Bit O’ White, My Eyes Keep Me In Trouble, Yo, Mo’ ModernismWith Your Eyes Only, COMPOSITE VISIONS is the ninth touring group exhibition organized by CCNOA Brussels, Belgium. and

Since its last theoretical stance as a sublime yet powerful art form, creating a new -ism and ironically also stating the end not only of painting but possibly also of visual art in general, and of its intellectual process, the idea of the ‘reductive’ itself has made an impressive return. Traces of the idea of the ‘reductive’ and similar approaches to art-making can be found in many artistic oeuvres which have come into the limelight since the overpowering postmodern related statements by artists and critics in the late 80’s, and the aesthetics of the ‘reductive’, nonobjective and concrete are now a subject of reflection in contemporary art practices, re-emerging from an imposed quasi non-existence.

In this state of relative non-recognition within the discourse and debate around art and culture in general, the subject of the ‘reductive’ as a possible antithesis to the overpowering reintroduction of representational painting and at the same time to the emergence of the focus on new media, technology and photography, has regained considerable strength over the last decade within an international frame of cultural production and commerce, as well as through the firmly held lone positions of artists like Mosset, Charlton, Armleder, Morellet, Palermo and others throughout the 80’s and 90’s.

Having seemingly recovered from the harsh critical overtones after almost being eliminated from contemporary discourse, in which a retroactive and purely commercial tone took over, the ideas and strategies of the ‘reductive’ and ‘essential’ have slowly found their way back into artistic language and practice. Yet, due to the visual superimpositions of present times, artists have started to shy away from the rigid limitations of -isms related to the ‘non-objective’ or ‘reductive’ and have embedded existing ideas, confluence of styles and approaches into the contemporary world, the here and now, mingling with popular culture as well as branching out of the studio practice inherent in painting as we know it and as the majority still likes to understand it.

Crossovers with other forms of art, like pop art, installation, and new media, play a major role in this new understanding of art-making in the realm of the ‘reductive’ and in its breaking out of its claimed territory with excursions into new planes of understanding, confronting the remarkable stakes which are on offer within the perimeter of ‘reductive’ art production today.

COMPOSITE VISIONS is triggered by the multitude of influences entering the thinking, thought process and practices of an array of like-minded contemporary artists from around the globe working within the fascinating and resilient discourse surrounding the historical, formal and contemporary explorations within the field of the ‘reductive’ in general and ‘reductive’ painting in particular.

Organized by the Brussels-based CCNOA COMPOSITE VISIONS comprises the work of 16 international artists and aims to give a modest inside overview of the possibilities within this broad approach. This type of exhibition is never able to display the entire palette of diversity; CCNOA's objective is simply to document some of the thinking around this subject.
http://www.ccnoa.org