In his both visually seductive and irritating photographic and filmic works, Elad Lassry explores canonical ideas about the use of images as influenced by various technologies and the history of the media. The work of Christodoulos Panayiotou is characterised by the performative - whether he is creating spaces for others to act in or exploring artistic and societal 'performances' in his works. 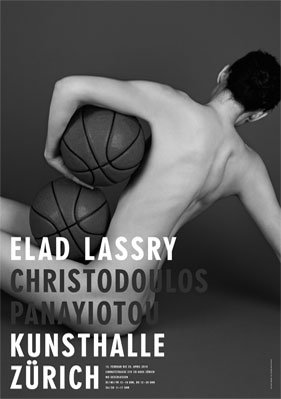 In his both visually seductive and irritating photographic and filmic works, Elad Lassry, who was born in Tel Aviv in 1977 and lives and works in Los Angeles, explores canonical ideas about the use of images as influenced by various technologies and the history of the media.

Elad Lassry’s exhibition in the Kunsthalle Zürich is the artist’s first comprehensive institutional exhibition. The approximately 45 photographs and five films presented in the exhibition include works that provide an overview of his activity of the past five years along with some new works which were created for the exhibition.

Elad Lassry’s photographs – everyday and design objects, fruit and vegetable still lifes, human and animal portraits, landscapes and cityscapes – allude to visual features and image constructions that have been used in photography, advertising, magazines and illustrated books, and in films. What interests him in this context is analogue source material and duplication methods and the development of different types of images in the history of the image before they were incorporated into the digital flood of the now omnipresent archive of available images. His photographic works, which do not usually exceed the format of a magazine or printed material, comprise either collages of acquired printed matter or newly-composed photographs. The collages consist of found illustrated single and double-page spreads from magazines which Lassry either reworks by heightening their design elements or reuses them several times for individual works as duplicated printed products.

In terms of their visual appearance, they differ through the nature of their use, and have already undergone, so to speak, additional anonymous and temporal "applied design" as the alteration of their form. The artist contrasts these unique specimens, in which he makes direct use of products of analogue duplication methods, with his far more frequent photographs. He plays here with the relationship between analogue and digital methods of producing images and, using well known images, questions the image itself by testing the omnipresence of images for the possibility of singularity. For example, the numerous portraits of the actor Anthony Perkins which Lassry manipulates digitally originate from analogue photographic archives. In treating them in this way he shines the spotlight on the specific nature of the individual portraits of Perkins and, at the same time the typological nature of the film industry’s publicity portrait. Other images used by Lassry are based on publicity shots, illustrated design books and animal photographs – found images which he restages in the studio using elaborate processes and which initiate and implement multiple processes of the complexification of interpretation, composition, production, original and reproduction on their way to becoming a new image.

Lassry’s photographs make use of the attractiveness of the familiarity of these images. However, they are almost too intensely coloured, too abstract, too staged. In addition this process of visual emphasis, they are presented in matching coloured frames which, on yet another level, thematicise critically the relationship between the image and the "picture" as a utilitarian object, refer to the history of the presentation of objects as art and the aestheticization of perception, and prompt distortions, and therefore, ruptures in the stereotype and the customary – in both temporal and interpretational terms – process of our perception of the images.
The artist further expands these irritating presentation "pedestals" in his exhibitions by placing the photographic image beside film projections which are equivalent in terms of format and presentational form. Lassry’s films, which are always silent, also strain filmic conventions and act through the heightening of the fields of tension between realism and abstraction, narrative and abstracting visual language, still photography and camera movement.

Untitled (Passacaglia), 2010, the new film which Elad Lassry made for the exhibition in the Kunsthalle Zürich presents an exemplary combination of his complex approach and exploration of issues concerning the circulation, reception and media history of images which the artist encounters on the journey to his visually striking works – works which convince by virtue of their inherent and new visual idiom. As in all his works, the film is initiated by historical models and conventions of representation as "shaped" by media and taste. The "models" for the film presented here, aesthetic clichés that have become part of every day design, such as the "California drop cloth", a fabric pattern that refers to American expressionism, and trivialised visual references to, for example, the works of Jackson Pollock, and is used for numerous interior fittings. The film also incorporates an exploration of methods for the reading of art works for television based on insights from psychology and perception theory and the translation of a well-known painting by Robert Delaunay from 1916, Tall Portuguese Women, into a set for the dance newly arranged by Lassry with dancers from the New York City Ballet. The short film’s probing tracking shots create penetrating images and an irritating work which does not provide insight into a choreography, a painting, a stage set or a story but renders tangible the process of seeing, that is the complex experience which is realised in the direct relationship of the seeing subject to the seen object. This is perhaps the reason why, in the final shot the dancers, who are presented up to then as objects like the set and choreography, smile directly at us.

The work of Cypriot artist Christodoulos Panayiotou (born in 1978, lives and works in Berlin) is characterised by the performative – whether he is creating spaces for others to act in or exploring artistic and societal ‘performances’ in his works. Everyday and folkloric traditions and practices, popular festivals, and other rituals rooted in society and popular culture play just as much a role in his works as the associated romantic myths and subtextual desires. Hence Panayioutou’s video works, installations, photographs and performances circle around the individual and collective representation of sentimentality, longing and the associated idea of melancholy and absence. The viewers often find themselves in situations that propel them back to their own social rootedness, cultural memory and personal desires.
The Kunsthalle Zürich presents the first institutional solo exhibition by Christodoulos Panayiotou that brings together works which are characterised by a strong conceptual approach and explore questions surrounding the notion of archive and the relationship between sound and image, story and history, and theory.

In his work Wonder Land (2008), the artist explores the topic of the annual carnival in Limassol. Through intensive research in the city archive, Panayiotou discovered that the aesthetic appearance of the carnival parade had been transformed over the years: popular topics gradually replaced the classical themes rooted in the historical and mythological tradition of Hellenism. Hence, Mickey Mouse, Mini Mouse and Donald Duck can now be seen parading the streets – a trend that began over 20 years ago in a Cyprus racked by political unrest and represents, at the same time, a subversive reformulation of the official intention behind the parade.

Panayiotou also pursues the theme of absence and its portrayal in the work Le Fauteuil de Sarah Bernhardt (2009). Sarah Bernhardt (1844–1923), one of the most famous actresses of the 19th and early 20th centuries, discovered the island of Belle-Île in Brittany in 1894. She acquired a small disused military fortress there at the coastal location of Pointe des Poulains, to which she regularly fled over a period of 30 years in the company of friends so as to escape the hustle and bustle of Paris. Panayiotou’s two photographs show the rocky coast of the island of Belle-Île. The structure of the rock also refers to the art-historical background as it becomes a reference to transitoriness and absence in the context of the title of the work – the armchair apparently carved in the rock for Sarah Bernhardt is empty and becomes the substitute for her self.

Panayiotou remembers another great female film star in the work Judy Garland: A Biography. In this work, he superimposes the first and last recordings of the emblematic ballad Somewhere over the rainbow sung by Judy Garland. The song, which was originally written for the film version of the novel The Wizard of Oz, became one of the best known songs of the 1930s. The superimposition of the two versions demonstrates the change in Garland’s interpretation over the years, becoming almost a metaphor for her life story. It also refers to the multiple social and political revivals the song has undergone to the present day. A screen print in the exhibition room announces the staging of Panayiotou’s sound installation in the Arthouse Alba cinema: the work will be presented before the regular cinema programme on Sunday, 21 March 2010.

Another poster shown in the exhibition announces the presentation of the sound installation To be willing to march into hell for heavenly cause (2007) in the Arthouse Alba cinema. The work was produced in September 2007 during a crossing of the Aegean Sea. It presents performances of seven songs from American musicals by Danish singer Kristian Finne Kristensen. The songs have in common the use of meteorological metaphors to formulate utopian projections of a better future. This work will also be presented in the Arthouse Alba cinema on Saturday, 20 February 2010 from 1 to 2.45 pm.

Catalogue:
Elad Lassry: The exhibition is accompanied by an extensive monograph; with texts by Bettina Funcke and Fionn Meade as well as a conversation between Beatrix Ruf and the artist.
Christodoulos Panayiotou: An artist publication is currently in planning.

The Kunsthalle Zürich at the Arthouse Alba cinema:
Saturday, 20 February 2010
The recordings from the performance To be willing to march into hell for a heavenly cause (2007, 19:34 min.) will be presented between 1 and 2.45 pm. Admission free.

Sunday, 21 March 2010
The sound installation Judy Garland: A Biography (2007, 4:33 min) will be played at the usual screening times. Admission with valid cinema ticket only.