Stark's work predominantly takes the form of collages. Visually, they are reduced to the minimum, with large areas of white paper or white under-paint left showing. Writing, used visually, has always been central to Stark's art, and for a long time she was better known for her art criticism and creative writing than for her own work. In the Intermedia Gallery: What Structures by Kate V Robertson. 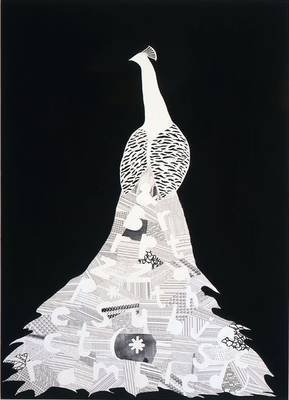 At the Centre for Contemporary Arts from 13 February to 3 April 2010, But what of Frances Stark, standing by itself, a naked name, bare as a ghost to whom one would like to lend a sheet? marks Frances Stark's first exhibition in a public gallery in Scotland and only the second in the UK since Nottingham Contemporary in late 2009. One of the most intriguing artists to have emerged from Los Angeles' vibrant art scene in the last decade or two, the exhibition at CCA follows several major exhibitions in museums on the European mainland in the last couple of years.

Stark's work predominantly takes the form of collages. Visually, they are reduced to the minimum, with large areas of white paper or white under-paint left showing. Yet these seemingly modest works open onto rich areas of thought. Writing, used visually, has always been central to Stark's art, and for a long time she was better known for her art criticism and creative writing than for her own work. The words are rarely her own, instead lifting them from a wide range of literary sources. Emily Dickinson, Witold Gombrowicz and Robert Musil are particular favourites, as are philosopher Friedrich Nietzsche and The Fall's front man Mark E Smith. Somehow, though, the words of others become her own, revealing her highly idiosyncratic thought processes.

This exhibition begins in 2001, when visual imagery first becomes a consistent aspect of the collages. Since then imagery has played an increasing role in her work, to the point where language drops away altogether. Certain images recur, which can be read like signs: women, who resemble Frances herself; peacocks, exhibiting their extravagant tail feathers; chorus girls taking the stage or waiting self-consciously in the wings. As this suggests, for Stark the act of making and exhibiting her art is a kind of performance, one that involves a journey from the private realm of her thoughts, her studio and domestic life to the public realm of audiences, of the responses of others. For Stark, putting oneself on display is a process wracked with anxiety and self-doubt, leavened by occasional moments of creative exhilaration and pride. Her work is cut through by her distinctive wit and self-deprecating irony. But what of Frances Stark…? culminates on a particularly daring note: three operatic kimonos, which double-up as soft-sculpture of old-fashioned dial-up telephones.


In the Intermedia Gallery

In her first solo gallery show since being shortlisted for Artists Taking The Lead, Kate V Robertson brings the supporting structures of the gallery: the plinths, the shelves and the gallery walls, to the fore.

At first glance, What Structures is a series of sculptural pieces in a white gallery space. However, on a closer look, the 'art’ objects on display carry far less weight than the animated, or elaborate structures on which they rest. Framed scribbles hang on moving walls, leaves, burned-out candles and pieces of tarnished metal sit on decorated rostra or move on coasters made of mirror balls, and from the ceiling the gallery security system beams CCTV observations up into the centre of a frosted glass plinth.

In drawing attention to the supporting structures of formally exhibited gallery work, Robertson wants to draw attention to the framework in which art is viewed, perhaps questioning whether such an established set of conventions has neutralised any radical potential of artists and their objects.

What Structures picks up Robertson’s interest in the context in which we experience art, as well as the futility of communication, following on from her acclaimed Edinburgh Art Festival street exhibition, Notices, in which temporary art works were hidden in amongst advertising hoardings full of posters advertising Fringe shows.