'Franz Erhard Walther - De l'origine de la sculpture, 1958-2009' is the largest show the artist has put together to date, including anything he has done in Germany, where his output has featured in numerous exhibitions and publications. To mark the publication of the catalogue raisonne' of Marcia Hafif's Italian paintings the museum will exhibit a selection of these canvases, which were already presented in 2001 at the museum. Finally the museum is pleased to show a recent work by Victor Burgin entitled Hotel-Dieu. The artwork is an installation at the Hotel-Dieu Saint Jacques in Toulouse, capturing Burgin's experience at the site through a play of correspondences between images and a narrative that is recounted by a disembodied voice. 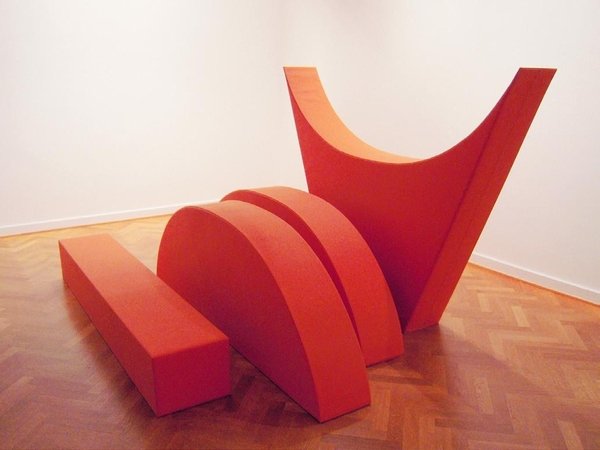 From 17 February to 2 May 2010, Mamco will be hosting the most important retrospective devoted to Franz Erhard Walther (1939, Fulda, Germany), one of the artists associated with the museum since its founding. Indeed, Mamco has followed his work for many years. De l’origine de la sculpture, 1958-2009 (On the Origin of Sculpture, 1958-2009) will be the largest show the artist has put together to date, including anything he has done in Germany, where his output has featured in numerous exhibitions and publications. Spread out over some thirty galleries on the museum’s four floors, this show brings together several hundred pieces that go back over a half century of making art.

As in other Mamco retrospectives (Martin Kippenberger, Claudio Parmiggiani, Siah Armajani), De l’origine de la sculpture, 1958-2009 consecrates an artist whose work has marked the history of the venue, both with an initial show devoted to Walther in 1998 and, since the museum’s opening, the permanent presentation of Werklager, a gallery featuring a large collection of works produced between 1961 and 1972 that includes one of his major pieces, 1. Werksatz (1963-1968).

A crucial artist of the avant-garde in the 1960s

Walther has left a profound and lasting mark on the German art scene by broadening the field of art and proposing new types of work, notably in terms of the role of the viewer as an integral part of a piece. Walther trained at the Offenbach School of Applied Arts and at Düsseldorf’s Kunstakademie. The artist initially focused on drawing (Wortbilder) before shifting his work towards the object and the new materials that were finding their way into the realm of sculpture such as the body, action, time and space. The early 1960s were a turning point in his output when he declared that the work of art is created in the process of action, the artist’s or the viewer’s. “Instead of a material object, be it an image or a sculpture, I proclaimed that the body’s gestures could have the character of a work of art.”

Walther creates cloth sculpture-objects displayed in a variety of ways, spread out in space, folded, filled out by a human body or left as they are, in the state of an object of pure contemplation. Hybrid works of art that verge on painting and sculpture, these pieces invite the viewers to experience their relationship to time and space. Yet whatever the materials or techniques used by the artist – he continues to turn out drawings notably – his work throughout his career has always come down to the importance he places in language, memory and history.

Hundreds of works over the museum’s four floors

The Mamco retrospective covers the different facets of the artist’s work. The extent of the space that has been set aside for the show makes it possible to present several groups of large-scale objects like Das Neue Alphabet (1990-1996), a series of twenty-six foam and cotton sculptures that reproduce the letters of the alphabet; and Raumelemente (1973), a large wall installation featuring thirteen elements made of cotton cloth. Juvenilia, unpublished archival photos, major works from the 1960s and ‘70s and very recent pieces will be on hand in an exceptional presentation for the museum-going public in Geneva.

The artist’s drawing will also command more than its share of attention with the display – for the first time outside of Germany – of the 500 original illustrations that make up Sternenstaub - Stardust (2009), an autobiographical work in which Walther recounts the highlights of his life between 1942 and 1973. To top off the retrospective, Walther will be present at Mamco on 20 April for a rare event that is open to the public. On that day the artist and art students from HEAD – Geneva will activate Werksatz, a major work by the artist that is part of the museum collection.

Along with this important retrospective, Mamco will be featuring the work of two artists that the museum has focused on in the past. To mark the publication of the catalogue raisonné of Marcia Hafif’s Italian paintings (Marcia Hafif, La période romaine / Italian Paintings 1961-69; publication scheduled for February 2010), the museum will be exhibiting a selection of these canvases, which were already presented in 2001 at the museum. The paintings, beautiful combinations of lines and chromatic fields that are stamped by Matisse’s legacy, evince the Italian context in which they were painted, offering a true delight for the eye !

Finally the museum is pleased to show a recent work by Victor Burgin entitled Hôtel-Dieu. Produced by Paris’s Jeu de Paume Museum, the piece is a joint initiative of Mamco and the Printemps de Septembre in Toulouse. The artwork is an installation at the Hôtel-Dieu Saint Jacques in Toulouse, capturing Burgin’s experience at the site through a play of correspondences between images and a narrative that is recounted by a disembodied voice. This is the chance to check up on the most recent work of an artist who figured in an important 2007 show at Mamco (La Cinquième Promenade et autres œuvres—The Fifth Walk and Other Works).