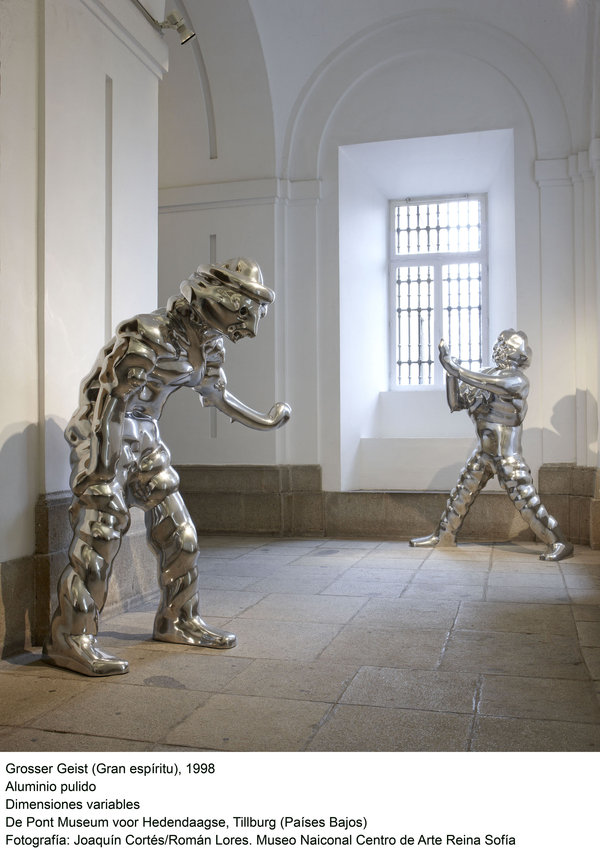 The Museo Reina Sofía presents an exhibition dedicated to the artist Thomas Schütte (Oldenburg, Germany, 1954). The show, which has been curated by Lynne Cooke, is the most comprehensive retrospective of this artist’s work ever organised in Europe and offers visitors a unique and detailed insight into the constant innovations that have characterised his evolution over the last 30 years.

The exhibition takes visitors on a tour of the various artistic stages of Schütte’s career, from his early works in the late 1970s while he was still a student to his latest creations. Consequently, as Lynne Cook has commented, the show will feature little-known works by the artist, including those made in the late 1970s while working at Gerhard Richter’s studio and contemporary pieces such as a work created especially for this occasion. The works on display include installations, watercolours, etchings, photographs and architectural models, as well as specimens from his major sculptural groups, such as the “Women” and “Dogs” series.

Most of the approximately 75 works will be exhibited on the first floor of the Sabatini Building. However, some of Thomas Schütte’s creations will shake off the constraints of the gallery walls to surprise visitors in different spots around the museum: the garden, the cloister, the old hospital wardrobe, or Space One.

According to the exhibition curator, the word “hindsight” carries multiple meanings. “Primarily, it refers to the fact that the exhibition surveys a career that now spans more than thirty years. But it also alludes to the ways that, especially over the past decade, the artist has looked back, mining both his own earlier work and the sculpture of previous eras”.

Thomas Schütte is one of the most important German artists of his generation. Schütte, who today is a figure of international renown, trained at the Düsseldorf Art Academy with Fritz Schwegler and Gerhard Richter. He first made a name for himself in the 1980s when he produced a series of architectural models that take the capacity of simplification and exaggeration to the extreme, and coincidentally offer the spectator mental protection and shelter. The works have a handcrafted yet simultaneously utopian appearance. Schütte’s entire oeuvre is steeped in social and political issues, as well as a preoccupation with the relevance and status of the artist in society.

Schütte eradicates the weight of history from his intense sculptures through the use of striking, mischievous and often ironic titles. He uses traditional sculptural genres such as reclining female figures and commemorative portrait busts, as well as monumental and memorial genres, but with highly unconventional results. His sculptural groups evidence his delight in materials and his indefatigable fascination with the most diverse techniques. Since the end of the 1970s, Thomas Schütte has been working on homonymous series that explore moments of human isolation, vulnerability and despair, all tinged with a hint of irony.

Exhibition layout
The discourse of this exhibition is not chronological. The artworks are located on the first floor of the Sabatini Building, where different spaces have been used that, in Lynne Cooke’s opinion, work very well with Thomas Schütte’s pieces. The potential of this iconic architect’s building has thus been exploited, making the most of its possibilities and playing with space and light. For example, a new door has been created that links the garden directly to Gallery A1. A series of windows have also been added to provide natural lighting for the halls, and the wide corridors and the cloister have been put to use. In addition, Space One has been selected to display the artist’s earliest work, including pieces such as Tapetenmuster (Wallpaper Designs) 1975, Paare (Pairs) 1977-80, and Dreieck (Triangle) 1978.

Artworks have also been installed in the two large corridors of the cloister. These fantastic figures or creatures can be seen from a distance and exert a strange force that draws visitors slowly towards them. These figures of polished aluminium from 1997, entitled Grober Geist (Great Spirit), will take visitors by surprise at different spots along the itinerary.

In one of the cloister corridors we find the work Konferenz (Conference) from 2002 which, as Lynne Cooke has commented, consists of four large ceramic faces that may be associated with sculpted Roman busts. The other corridor contains the 2006 work Wichte (Imps) comprising 12 bronze sculptures.

The Protocol Room contains the series United Enemies – A Play in Ten Scenes from 1993-94, which features mutilated figures, some of them trapped inside bell glasses. This hall also contains photographs from the same series, the 1981 drawings entitled Auf Wiedersehen (Goodbye), and Self-Portrait as a Candle Holder from 1998. As visitors follow the itinerary, they will come across Schütte’s works in various nooks and crannies throughout the museum until they finally reach Gallery A1, where the majority of the pieces are displayed.

Upon entering this space, one is immediately struck by the playful use made of natural light on this occasion. The open windows create a link between the nature in the Sabatini gardens and the iron and steel of the Nouvel Building. Schütte’s pieces come alive in the sunlight, flooding and transforming the space. In this immense hall we will find watercolours, scale models, installations, drawings and sculptures, including: Die Fremden (The Strangers), 1992, Groβe Mauer (Large Wall), 1977; Groβer Respekt (Large Respect), 1993-1994; the Hund (Dog) series, 2004; and Weinende Frau (Weeping Woman), 2010, created specifically for this show.

Finally, the well-known series of sculptures entitled Frauen (Women), 2000-06, has been installed against the incomparable backdrop of the Sabatini gardens. In one of the catalogue essays, Penelope Curtis gave the following opinion of this sculptural series: “They shock because of the savagery – perceived or invested- in their representation of the female form [...] Here we think of one man’s relationship with woman, rather than of one man’s relationship with sculture”

About the Artist
Born in Oldenburg in northern Germany in 1954, Thomas Schütte studied at the Düsseldorf Art Academy from 1973 to 1981 (first under Fritz Schwegler and after 1975 under Gerhard Richter). Since his first solo show in 1979, Schütte’s career has been amply documented in numerous exhibitions.

Although Schütte was generally recognised as a sculptor from the time he began exhibiting internationally, he had initially been schooled in pictorial modes. Slyly challenging the underlying logic of his mentors’ works, Schütte furthered their incipient engagement with the decorative in a memorable series of in situ pieces such as Ringe (Rings), 1977/1990, Girlande (Garlands), 1980, and Grosser Mauer (Large Wall), 1977. Comprising some 1,200 “bricks”, small abstract paintings in a gestural idiom, Grosser Mauer makes the architectural support integral to both its identity and function, while its use of illusionism wittily glosses the notion of site- specific art.

Soon, however, the conceptual playfulness that underpinned this remarkable formative work darkened into a deeply mordant tone, exemplified in the heterogeneous group of memorials that began in the early 1980s with a tomb to commemorate the artist’s own untimely death (1981), and subsequently included a caustic proposal for a monument to Alain Colas, the lone French sailor lost at sea (1989) and a hypothetical gravesite for the monster revenant, Adolf Hitler (1991). Indeed, the contrarian spirit informing these proposals provides a key to interpreting the artist’s protean engagement with myriad sculptural modes, styles, forms, materials and techniques throughout his career.

Catalogue
A catalogue has been published (in English and Spanish) to accompany this exhibition. In addition to offering reproductions of the works on display, this publication will feature essays written specifically for the occasion: “Turning the Tables” by Lynne Cooke (curator of the exhibition and Deputy Director for Conservation, Research and Publicity of the Museo Reina Sofía), “Reclining Sculpture” by Penelope Curtis (Director of Tate Britain in London), and “Modest Abstraction: Thomas Schütte’s Early Work” by Christine Mehring (associate professor of Art History at the University of Chicago). The catalogue will also feature a biography of the artist and excerpts from interviews with Schütte, as well as the list of artworks. Finally, it will include a text entitled “Bartleby&Co” by the author Enrique Vila-Matas.

Encounter with Thomas Schütte
On 17 February, the Auditorium 200 will host an encounter between Lynne Cooke, the exhibition curator, Julian Heynen, director of the Kunstsammlung Nordrhein- Westfalen, and the artist. In this conversation with Thomas Schütte, the participants will discuss the exhibition and the situation of contemporary sculpture. Nouvel Building, Auditorium 200
7:30 pm
Free admission

Regarding Thomas Schütte
The Education and Mediation Department has organised guided tours of the exhibition for groups of 20 people or less. These tours are offered free of charge and no advance registration is required.
When: Thursdays at 7 pm, from 18 February to 13 May
Where: Sabatini Building meeting point