Vinyl, an exhibition of records and covers compiled by Guy Schraenen. For more than 30 years, his fascination with artists' multiples has led him to amass a unique collection with an acoustic and visual angle. It illustrate how artists from the 1920s and throughout the 20th century have experimented with language and sound. Face B is a project by Daniela Franco, it includes collaborations by different members of the cultural community with a special interest in music. Celeste Boursier-Mougenot extends the notion of musical score to the unorthodox combinations of miscellaneous materials and media which he uses to generate living sound forms. All the creations of Marco Decorpeliada address the psychiatric diagnoses and pigeonholing that left him battered and worn. 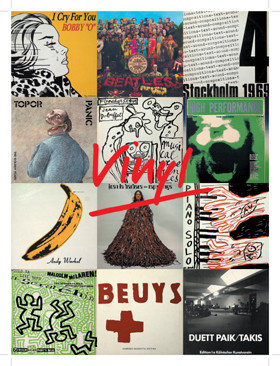 From February 19th to May 16th 2010, la maison rouge presents Vinyl, an exhibition of records and covers compiled by the British collector, publisher and curator Guy Schraenen. For more than 30 years, Guy Schraenen’s fascination with artists’ multiples (objects, catalogues, books, magazines) has led him to amass a unique and highly specialised collection on the theme of sound. Vinyl shows LPs from an acoustic and visual angle to illustrate how artists from the 1920s and throughout the twentieth century have experimented with language and sound.

The exhibition presents close to 800 albums alongside tapes, CDs, specialist magazines, reference books, catalogues and artworks. As artists began to work with sound, and as records and covers became media for the visual arts, a new and extremely creative art form appeared. Artists from different currents imagined sleeves for their own recordings; the album cover gave artists an especially stimulating format.

For those who grew up with vinyl, albums and covers are a part of their personal history; for the post-vinyl generations, they have a legendary aura. Vinyl is organised in sections, beginning with 1920s avant-garde movements such as dadaism and futurism through Fluxus, new realism, pop art, the Zaj group and conceptual art, and ending with the most recent sound experiments. Many of these recordings document performances and happenings, two essential manifestations of artistic movements of the 1960s and 70s.

The exhibition takes in sound poetry, and presents records by artists such as Hanne Darboven, Jean Dubuffet, Dieter Roth, Joseph Beuys, Laurie Anderson, William Burroughs and Allen Ginsberg, Henri Chopin’s OU magazine and the Giorno Poetry Systems. Singles feature works by artists including Yves Klein, Roman Opalka, Hermann Nitsch, Tom Wesselmann and Karel Appel. The link between the visual arts, rock and pop is highlighted with records by the Rolling Stones and the Beatles, and by more recent groups such as Kraftwerk and Sonic Youth. They became icons in the hands of Andy Warhol, Robert Franck, Peter Blake and Raymond Pettibon. Another part of the exhibition focuses on records as objects, i.e. records that break with the classic round shape.
Visitors can listen to every record in the collection at a specially-designed deck. Vinyl is organised by the Research Centre for Artists’ Publications/Neues Museum Weserburg Bremen, Germany and by the Museu d’Art Contemporani de Barcelona (MACBA), Barcelona, Spain.

Parallel to the exhibition 'vinyl, records and covers by artists', Face B, a project by Daniela Franco, will include collaborations by different members of the cultural community (artists, writers, musicians, music labels, filmmakers...) with a special interest in music and its visual language. They will participate sharing their own record collections through screenings, D.J. sessions, graphic material and a website. Daniela Franco has asked each of them to prepare a list of records based on a series of specific instructions. Throughout the exhibition Vinyl, these playlists, in their visual and musical form, will be available on the website of la maison rouge and shown on multiple screens.

Every Thursday from 7:30 PM to 10 PM, D.J sessions will be held at the café at la maison rouge. Surrounded by the exhibition Vinyl, artists, journalists, record collectors, etc. will be invited to deejay from their own collections. To complete this project, every month a limited edition triptych showing work from artists who use record covers as a platform for their work, will be available.

Daniela Franco was born in Mexico, she lives in Paris. She obtained a Fulbright Scholarship for an MFA at the San Francisco Art Institute in 1996. Her work has been awarded by the Rockefeller Foundation and the Fundación/Colección Jumex amongst others. A main characteristic of her work is the collaboration with other disciplines (literature, music...). For several years she work on video, mainly on editing. Her videos use images and sounds from a poetical construction stand, for their form, euphony and rhythm, regardless of their meaning. Daniela Franco’s most recent work is based, formally, in the orchestration of projects in collaboration with writers, musicians, architects, etc. And conceptually, in the creation of fictions through coincidences and the slight alteration of daily life.

The work of Céleste Boursier-Mougenot must be seen first and foremost as that of a musician who, for the past twelve years, has shown his work exclusively in contemporary art venues. From 1985 to 1994, he composed for author and director Pascal Rambert’s Side One Posthume Theatre company, following which he began to give his work an autonomous existence through installations.

Céleste Boursier-Mougenot succeeds in drawing out the musical potential of multiple and diverse objects and situations. He extends the notion of musical score to the unorthodox combinations of miscellaneous materials and media which he uses to generate, usually live, what he describes as living sound forms.
Each device functions in relation to the surrounding architecture or environment, where the process behind the music is laid bare for the visitor to see and comprehend.

Céleste Boursier-Mougenot works with Paula Cooper Gallery, New York. He was awarded the 1998 P.S.1-Institute for Contemporary Arts- AFAA Artists’ Studio Program. Since 2006 he has worked with Galerie Xippas in Paris.

La maison rouge presents the first showing of the work of Marco Decorpeliada (1947-2006), a non-professional artist who produced a stream of singular creations. All his creations address the psychiatric diagnoses and pigeonholing that left him battered and worn.

His riposte to being labelled and catalogued this way was to manufacture objects which challenge this psychiatric nosology. The detonator came when he discovered what he saw as a clear correspondence between the codes given to mental disorders in the Diagnostic and Statistical Manual 4th Edition and the product codes in the Picard frozen foods catalogue: two items, one number.
He thus counters 20.1, Schizophrenia, Catatonic Type with 20.1, Whole Cooked Shrimps; 42.0, Obsessive-Compulsive Disorder (OCD) with 42.0, Steamed carrot sticks.

Marco Decorpeliada turns classifications upside down. His first pieces, which he called Schizometers, are made from folding rules. With them he tracks the shortcomings of nosology down to the freezer door, while a skeleton assimilates classification with calcification.

Marco Decorpeliada’s work testifies to what we could call artistic guerrilla warfare. A war against the armada of referential knowledge and its dead ends. A joyful, ironic, parodical, comical yet rigorously logical war.