Solo I. The gallery begins 2010 with a new exhibition dedicates to a young emerging artist. The first show is dedicated to the Swiss artist. In the project badrutts palace & co, Corinne L. Rusch visits historically relevant Grand Hotels. This atmosphere fascinates Rusch. She selects various hotel spaces and stages her photographs in these fin-de-siecle settings, to reframe current social aspects through interaction. 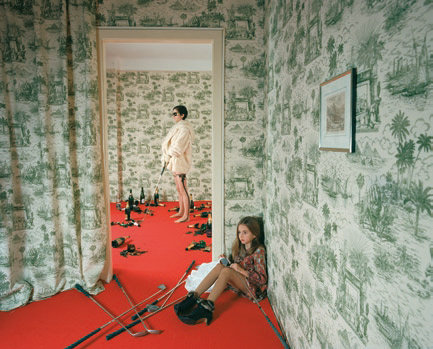 The Fotogalerie Wien begins 2010 with a new exhibition format with the title SOLO, a format that, for the first time, dedicates one of the eight yearly exhibitions as a solo exhibition to a young emerging artist. This new series of exhibitions is to serve as a platform and springboard to artists who are at the beginning of their career, yet who already have an extensive body of work that should be presented to a broader public. The goal is to stimulate a lasting awareness of the artist and his or her works: In this case, our BILDER invitation booklets serve the purpose of a small catalogue; opportunities for cooperation and traveling exhibitions will also be promoted.

The first show of this newly developed exhibition concept, which will also be the first exhibition of the New Year, is dedicated to the Swiss artist, who also lives in Vienna, Corinne L. Rusch. In the project badrutts palace & co, which will be shown in the larger exhibition space at the FOTOGALERIE WIEN, Corinne L. Rusch visits historically relevant Grand Hotels. In a specific way, these places house a flawless beauty as well as numerous stories. Since the 19th century, the rich and beautiful have had a meeting place in these hotel palaces, for example, in Kulmhotel, St. Moritz.

Parties were celebrated there, the rich and beautiful were accommodated for weeks and months at a time, they let themselves be served, they engaged in sports, new love affairs began – intrigues were a daily occurrence. This atmosphere fascinates Rusch. She selects various hotel spaces, from the tennis court to the lobby, and stages her photographs in these fin-de-siècle settings, to reframe current social aspects through interaction: a room set up like the banquet of a nouveau riche banker or Overtime, a kind of vision, in which nature reclaims her space – a forgotten tennis player and nature nearly grow into each other.

“I point out moments, the highlights of a story and allow the narrative and scenery to slip into the surreal. I stage my lifeless-appearing protagonists in identity defining spaces, where gestures and details become a part of the narrative and consolidate the scope of things. Experienced and seen scenarios become fictional, allowing the commonplace to appear extraordinary, letting them slip into absurdity: an open play with figures and masks; a reality of its own category, between daily routine and poetic form.” (Corinne L. Rusch)

An unsettling atmosphere emanates from the installation thinking around - metaphors in nature – a curious mix of stuffed animals and photographs exhibited in the smaller exhibition space. In her installation, the artist explores with irony the obvious, but seldom observed parallels between the human desire for beauty and youth, and taxidermy. The artificial conservation of wild or tame animals could be interpreted as an expression of the human pursuit of ownership and claim to power.

The densely packed medium-format photographs, presented in a jarring manner between the stuffed rears of animals, appear to represent scenes of a taxidermist’s backroom. Among tiger stripes and glass eyes, one discovers women’s bodies – all of whom are nameless and exude a lifelessness, similar to that of stuffed animals. The physical juxtaposition is as much Rusch’s metaphor for nature as it is also a reference to the immediate relatedness of hunting sport and the societal obsession with so-called “trophy wives”.