It might seem familiar. The photographer and filmmaker set off for New York in 1979 and quickly became a significant documenter of alternative youth culture in America throughout the last three decades. The exhibition is showing work from his entire oeuvre, ranging from photos of the emerging hip-hop and downtown art scene in New York in the 1980s and the snowboard and skate culture in the 1990s, to frequent depictions of his own family in Northern California over the last ten years. 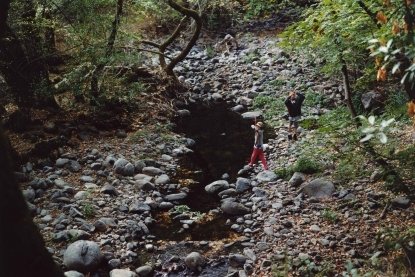 This spring Foam_Fotografiemuseum Amsterdam presents an exhibition by the Amsterdam-born photographer and filmmaker, Ari Marcopoulos. Marcopoulos (b. 1957, Amsterdam) set off for New York in 1979 and quickly became a significant documenter of alternative youth culture in America throughout the last three decades. Foam is showing work from his entire oeuvre, ranging from photos of the emerging hip-hop and downtown art scene in New York in the 1980s and the snowboard and skate culture in the 1990s, to frequent depictions of his own family in Northern California over the last ten years.

Marcopoulos’s work is characterized by a remarkable feeling of intimacy. Whether it concerns celebrities from the world of music or art, or his own family, he approaches his subjects in an intuitive manner and he always knows how to get close to the heart. His photos are direct, extremely personal and subtly structured. Recurrent themes are art, music, graffiti and the vulnerability of the human body. The exhibition shows a cross-section of his work from the last 30 years, varying from grainy black and white copies, monumental colour photos, videos, books and zines.

Upon arriving in New York, self-taught Marcopoulos had the opportunity to learn the profession from two great, but very different masters. He started out as a darkroom printer for Andy Warhol, from whom he learned that anything is worth photographing. Marcopoulos also worked as an assistant to photographer Irving Penn, from whom he gained more technical skill and learned that control and a simple approach produce the best images.

At the beginning of the 1980s, Marcopoulos began to photograph street culture in New York, which at the time was characterized by an emerging graffiti and hip-hop scene. As is evidenced throughout his entire oeuvre, Marcopoulos has the ability to assimilate into the group he’s following, by which he seems to stay ahead of the Zeitgeist. His earlier work contains portraits of personalities that later emerged as the leading players of their time, such as Jean-Michel Basquiat, Robert Mapplethorpe and rappers like Rakim, LL Cool J or Run DMC.

In the 1990s, Marcopoulos became interested in the lives of skateboarders. He befriended a group of young skaters who were recruited for the film Kids by Larry Clark in 1995. Marcopoulos followed them on a bicycle and documented them both as a group and in their personal lives. An assignment for a snowboard company introduced Marcopoulos to a new youth culture of snowboarders. In documenting these groups, he combined images of extreme physical exertion and concentration with intimate images of their daily lives.

After his marriage, Marcopoulos moved to the West Coast, where he became the father of two sons, Cairo and Ethan, who frequently appear in his photos. The themes from his earlier years return in photographs of his children growing up, such as skateboarding, graffiti and music.

Ari Marcopoulos became acquainted with photography at an early age, when he received an SLR camera as a gift from his father. After living in New York for a long time, for the last few years he has resided in northern California. Marcopoulos has exhibited his work in Gavin Brown’s Enterprise, NY (2000), Deitch Project NY, The Photographer’s Gallery, London (2002), MOMA (2005), MU Eindhoven (2006), Gallery White Room, Tokyo (2008), Berkeley Art Museum and Pacific Film Archive, CA (2009), amongst others.

Marcopoulos’ work is being simultaneously exhibited at Foam and at the Whitney Biennale in New York.