A new photography exhibition, bringing together more than 100 pieces, including rare and vintage works across almost a century of photography. A Positive View will provide an unusual and interesting opportunity to consider how practitioners beyond Europe and America are working with photography. Curated by Nadim Samman. 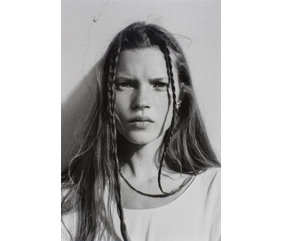 The must-see photographic event for London 2010, showcasing the finest 20th and 21st century photography from around the world For one month only, from 10th March to 6th April 2010, A Positive View returns to showcase an extraordinary range of photography on a truly international scale, under the Royal Patronage of Prince William supporting Crisis, the homelessness charity.

The third edition of this fully curated, museum-scale photographic exhibition, to be held at Somerset House, will bring together more than 100 rare and signed vintage works across almost a century of photography; classic and contemporary works will cross a variety of genres, from still-life, fashion, landscape, portraiture and reportage. It will be followed by a Royal Gala reception and auction at Christie’s on 15th April, in aid of Crisis.
Two outstanding masterpieces by Henri Cartier-Bresson will be on show; his renowned Seville (1933) and the magical Queen Charlotte’s Ball, London (1959). Other highlights will include a rare landscape by Elliot Erwitt, Wyoming Steam-Train Press, (1954); Friends of the Spanish Press (1968) by the winner of the 2007 Venice Biennale Golden Lion, Malick Sidibe, a haunting image from Robert Polidori’s New Orleans series (2006) and Corinne Day’s iconic and first-ever seen photograph of the supermodel Kate Moss, Kate (1990). These will be shown along with a stunning still life of Francis Bacon’s Studio (2001) from Perry Ogden’s 7 Reece Mews series and Wim Wenders’ classic Lounge Painting, Gila Bend, Arizona (1987).

For the first time, A Positive View will also feature work from contemporary artists whose creative practice incorporates photography, with geographically diverse representations from Korea, China, Japan and West Africa.
With signature works by Seydou Keita, Yum Joongho, Bohn-Chang Koo and Weng Fen among others, A Positive View will provide an unusual and interesting opportunity to consider how practitioners beyond Europe and America are working with photography. In another departure, the 2010 edition of A Positive View will also include works by unknown photographers, all clients of the homelessness charity Crisis who have been studying photography at the Crisis Skylight, education, training and employment centres in London and Newcastle.

Exhibition Curator, Nadim Samman states: "As A Positive View benefits people on the margins of society, this exhibition brings together images of a notional ‘centre’ – social icons, home, the West – with peripheral visions. In some cases the display suggests their unsettling interdependence. At the same time, as with previous editions, A Positive View continues to showcase the achievements of leading photographers past and present."
Each of the works donated by the photographers, or their representatives and estates, have been included in the exhibition following a stringent selection process by A Positive View Patrons, who include Philippe Garner, International Head of Photographs at Christie’s, and Tim Jefferies, Director of Hamilton’s Gallery, with exhibition curator Nadim Samman.

Patron Philippe Garner said: “This exhibition is truly international in scope and represents the contemporary vitality and authority of the photographic medium across many genres. I have spent forty years as a champion of photography and I find it very rewarding to be part of such a stimulating project – one that invites us to celebrate the medium for so very worthwhile a cause.”
The prestigious Somerset House will provide a spectacular setting for the exhibition. Gwyn Miles, Director of Somerset House Trust comments: ‘We are delighted to play host to an exhibition of the calibre and quality of A Positive View. The diversity work on show is truly impressive. It is fascinating to see the curatorial interaction with the space, which truly reveals just how suited our galleries are for both cutting edge contemporary and classical photography.’

The exhibition will be followed by a Royal Gala reception - co-hosted by Barclays Wealth and Vogue - and the charity auction of 100 of the most collectible works at Christie’s London on 15th April 2010 with 100% of the sales proceeds going to Crisis.
Leslie Morphy, Chief Executive of Crisis, said: “We are delighted that the third edition of A Positive View will be in aid of Crisis. The quality of the international work donated has been extraordinary and the generosity of the photographers and their representatives without rival. The exhibition also poses a unique opportunity for our clients’ creative achievements to be recognised on an international platform. Prince William’s interest in homelessness and generous involvement as patron is a key ingredient to what promises to be the most impressive A Positive View yet.” A 200-page fully-illustrated coffee-table book will be published in March, and will be available for purchase from Somerset House, Christie’s internationally, specialist art bookshops and online through Amazon.co.uk (£25, March 2010). A limited edition, signed and numbered hardback edition will also be available (£100, March 2010).