I am a judge 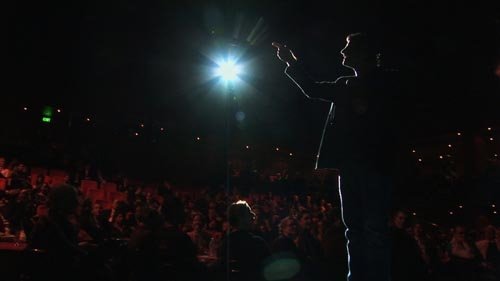 The work of Spanish artist Dora García explore certain expressions taken from popular culture, processed in real time and through a fictionalized course of events. Fiction becomes García’s one important tool since the artist has no intention of building reconstructions of history, but rather to offer possible scenarios where conventions concerning ethics and morals are being challenged. The walltext I am a judge (1997) describes a scenario with a judge who no longer can separate right from wrong. Such an ambivalence continues to diffuse the motives of what we know as morally and juridically just throughout the entire exhibition.

The dark humour permeating the mood of this exhibition introduces itself instantly in the work Just because everything is different, it does not mean that anything has changed (2008). The video deals with comedian Lenny Bruce being arrested in Australia in 1962 on the grounds of obscenity, having delivered only one sentence from the stage in his first and only appearance in the country. The point of intersection between the performance of the actor and the expectations and reactions of the audience is scrutinized in Real artists don’t have teeth (2009), a newly written monologue where the artists’s role contrasts societal norms. Here, Lenny Bruce reappear in the company of characters like the director Jack Smith and the dramatist Antonin Artaud. The performance will be delivered at Moderna Museets Biograf on 9/3 in a collaboration with the museum.

In meeting the sculpture Steal this book (2009), a book in an edition of 250 copies, visitors are confronted with a dilemma on an individual level - giving in to the invitation expressed by the book cover implies a risk of being caught whilst committing a crime. Dora García’s book copies the cover of Abbie Hoffman’s book with the same title from 1971, a text instructing the reader how to attack and live off the system. In Dora García’s version instructions has been replaced by a series of dialogues and e-mail conversations between García, her actors and others that share the responsibility of the work and its execution with the artist.