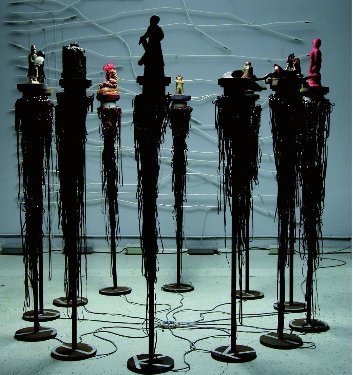 Pullulating within the very institution, infiltrating its varied spaces and surprising the strolling visitor will be recent works by this 'nomad' artist and others especially produced for the occasion.

The exhibition will be installed by stages, beginning on 10 February with the Atelier Brancusi, the Bibliothèque Publique d'Information, the Bibliothèque Kandinsky and the Museum (Level 4). These will be followed by Level 5 of the Museum on April 4, and Level -1 of the Forum on 21 April 2010.

Born in Istanbul in 1938, to a family of Armenian descent, Sarkis Zabunyan trained at the Academy of Fine Arts in that city before moving to Paris in 1964.

For more than 35 years Sarkis has created installation works that mobilize both the memory of place and his own personal memory, drawing for this on his 'spoils of war' (his accumulation of everyday objects, art objects, ethnographic objects, images...), a leitmotiv in his work since 1976. Working notably with neon, video, photography, watercolour and a range of materials (modelling clay, glass, water and more), Sarkis 'disseminates' his installations, pursuing a distinctive strategy of infiltration that problematizes distinctions of time and space.

Un-situatable,' the works enter into resonance with the spaces in which they appear. In taking possession of the Centre, Sarkis thus enters into dialogue with the spaces of the Museum and the works that they hold. The objects of La vitrine des innocents (2005-2007) are thus closely related to those of Mur de l'atelier (1922-1966), accumulated by André Breton; The luminous crosses in Conversations entre Joraï et mon Atelier (2001-2002), a model of his own studio, make discreet reference to the works of Kazimir Malevich; the felt of big clothing pieces such as Le printemps et la nuit (2000-2002) and of Sommeil abandonné (2002) resonate with Plight (1985), the famous installation by German artist Joseph Beuys, one of the Sarkis' three great tutelary spirits, alongside art historian Aby Warburg and Russian filmmaker Andrei Tarkovsky. In the Forum, Sarkis enters into "conversation" with the latter in the watercolour series D'après Stalker (1989), presented as part of La Chambre, an installation conceived for this exhibition.

From the beginning of May, at the Atelier des Enfants (the Centre's children's workshop), a programme developed by the artist offers workshops on the theme of watercolour. This technique, so crucial to Sarkis' work, will be presented through a fascinating exercise in which children dip their brushes into pure paints and then observe these as they disperse and combine in water: a voyage through space!