Ahir, dema'. The work includes two 16-mm films (transferred onto DVD) recently made and a wall piece Untitled (Two frames #2) (2010), all framed by an architecture also designed by the artist for the occasion. This exhibition heralds a new approach to considering the production of work in the setting of the Capella MACBA. All the exhibitions will share the common denominator of having been specifically produced to be shown in this space. 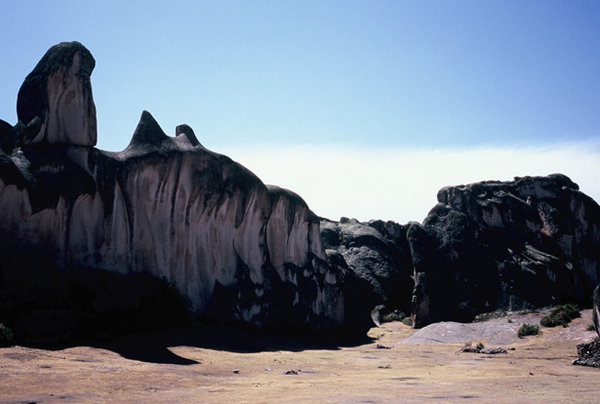 In presenting the first solo shows in our country by three artists, MACBA seeks to strengthen the role played by Capella MACBA in its activities as a whole. The Peruvian Armando Andrade Tudela (Lima, 1975), followed by the Moroccan Latifa Echakhch (El Khnansa, 1974) will be the first artists showcased in a new approach to artistic production at the exhibition centre in Capella MACBA, the former church of the Convent of Els Àngels. Under this new line, shows presented will have a common denominator: they will all feature works produced especially for this particular venue. However, this is not an attempt to forge links with architecture; rather, it is an initiative aimed at fostering the creation, through a specific topos, of new works that can, in the future, come to form part of the MACBA Collection. Andrade Tudela launches the Capella MACBA Series with three new works produced in 2010: two 16mm films, Marcahuasi and Synanon, transferred to video, and a mural piece, Sense títol, for which the artist has designed a most unusual structure. Tudela will be followed by the artists Echakhch and Pep Duran. All these exhibitions will be complemented by electronic publications that will soon be made available from the MACBA website (http://www.macba.cat/serie-capella).

Armando Andrade Tudela (1975, Lima, Peru) lives between Berlin and Saint-Étienne (France). He studied at the Universidad Pontificia in Lima, the Royal College of Art in London and the Jan van Eyck Academie in Maastricht. Though his work has been presented in Dijon (Frac Bourgogne), Berlin (DAAD), Birmingham (Ikon Gallery), Frankfurt (FKV), Basel (Kunsthalle Basel) and London (Counter Gallery and Annet Gelink Gallery), ahir, demà is his first solo exhibition in Spain. He has also participated in major group exhibitions in Lima, Warsaw, Vienna and New York, at the Shanghai and San Pablo biennials and in two exhibitions at MACBA (Modernologías and Tiempo como materia. Nuevas adquisiciones, 2009).

Tudela’s work explores form and its relationship to time. Time can only be understood through the objects and events that materialize it. Artistic practice is a way of rendering time current through matter. More specifically, Armando Andrade Tudela is concerned with relating different ways of interpreting objects and, thus, different ways of conceiving the future through the multiplicity of pasts to which each culture has access.

In his work, Andrade Tudela seeks to map the relations between form, type and meaning. At the core of his project for Capella MACBA are two films with running time of eight and ten minutes respectively, and a mural piece formed by frames and glass. All are supported by an ephemeral architectural structure that the artist designed specifically to present the three new works at Capella MACBA. The films both focus on archaeological remains. Synanon (2010) features recent human remains, whilst Marcahuasi (2010) depicts a remote, natural site: an impressive volcanic rock formation that has given rise to the most grotesque theories. A fascinating correspondence is established between the two, questioning the way in which we interpret what we see.

Are these images symbols of a universal form that goes beyond the here and now? Or, like furniture in a second-hand store (Synanon), are they merely remains from fleeting life, specific, bound to everyday conditions? The two films work as a diptych: one presents culture through objects, the other, nature as a place of worship. The third piece, Sense títol, installed in one of the side spaces at Capella MACBA, is a large mural work featuring an interplay of glass and reflections. In it, by depicting a process in which an image is edited, Tudela questions the concept of totality.

Archaeological remains
Tudela’s film Synanon takes as its starting-point the foundation of the same name, established in Santa Monica (California) in 1958 by Charles E. Dederich, a former member of Alcoholics Anonymous. Synanon was a community whose philosophy was based on self- help, a conception of life as a constant exercise in rehabilitation through social activities. The film features a store where furniture and other artefacts have ended up, giving rise to an accumulation of forms. These forms are not designed by nature, but by man. As such, they are an integral part of the history of ‘design’ – the history of the adaptation of form to create styles, worlds. The amalgamation of these different ways of understanding objects, and the nature of the spaces that can be created by using them, clearly reveals the various time codes embedded in the history of taste. Contemporaneity is not the ‘here and now’ presented to us, but is constructed out of numerous elements and decisions. Hence, by not alluding, except in the title, to the origins of the objects we see in the film and to the dream of the community behind them, Tudela transforms everything that appears onscreen into archaeological traces of a world the viewer knows nothing about.

It is precisely this aspect that creates the area of intersection between this film and Marcahuasi, also produced specifically for the occasion. Marcahuasi is a plain to the east of the city of Lima (Peru) that extends across four square kilometres in the Andes. It is a remarkable stone formation of volcanic origin situated at more than 4,000 metres above sea level. The rocks, which are impressive not only because of their size but also because of their extraordinary forms, have prompted bizarre theories concerning their origin and given rise to evocative names. In the mid-1950s, Daniel Ruzo, regarded by some as an eminent archaeologist and by others as a prophet and cryptographer, wrote an essay in which he declared that the stones are ‘sculptures’ created by what he termed Masma Culture or the ‘Fourth Humanity’ more than 10,000 years ago. In his book, Ruzo also prophesied that more stones or ‘sculptures’ would appear during this century, and in this he has been proved right. The stone that Ruzo was especially drawn to was The Head of the Inca or Peca Gasha, which was later named The Monument to Humanity. Ruzo writes that on its right flank (facing south-east) can be seen a series of faces that have defied the forces of erosion. One of the faces seems to be that of a black person, while another portrays a strange large-headed being of simian appearance. Needless to say, in the sixties Marcahuasi became a cult centre to which hippies from across the entire continent, north and south, flocked, and which became known as "the plateau of the gods".

The largest outdoor museum of sculpture in the world, Marcahuasi represents the possibility of turning upside-down the major archaeological and historical narratives. By focusing on places geographically and etiologically closer to Europe, these narratives have long ignored not only this place but others that in actuality mark the origins of culture and civilisation. Marcahuasi and the ‘Fourth Humanity’ call for a shift in the interpretation of the past and invoke a culture prior to the modernities we attribute to Egypt or Greece. They take their place once again in history, not just as exponents of a technologically advanced culture, but as the die from which all other cultures are cast, the primordial tribe.

The history of modernity
The notion of the matrix or die is questioned in Sense títol, a piece that revolves around the idea that a distinction might exist between form and content, between content and container. Just as Ludwig Wittgenstein denied the existence of the mind as an entity separate from the body in his philosophical logic, so Armando Andrade Tudela plays with elements that are peripheral to the image and arranges them in such a way that they constitute the image itself. There is nothing else beyond; everything participates in the representation; no image is more real than any other, as everything is arranged around reality. What we term a document is an effort to get close to the limit of verisimilitude, but it is no more true than this play of reflections. The difference between a ‘realist’ system of representation and another that is formal or abstract is the way that its relationship with access to immediate knowledge of the world is structured. Whereas a realistic system conceives of the possibility of obtaining information through images, formal and abstract systems deny or simply minimise the importance of the connection between what we see and the world beyond.

The work constantly establishes links with the history of modernity, the history of architecture and its reception in Latin America. However, rather than referring to specific projects, Armando Andrade Tudela alludes to the osmosis that exists between the widely known and disseminated modes of architecture of the 1950s and others that represent their phantom, their counter-image.

The three works, together with the exhibition architecture produced by the artist, are separate yet interdependent. As a group, they encompass the interests that Armando Andrade Tudela explores through his output. Culture is founded on the possibility of historical transmission, of knowledge travelling, repeating and transforming itself, giving rise to other systems of knowledge. This process generates numerous forms of codification – one of them without question being modernity – but codes are not transparent and contain other modes of signification within them. Changes and alterations take place in this continual journey and although they may seem to be a distortion of the original project, a form of folklore, in the end they are the key that forces us to rethink not only the great narratives but also their interpretation by the various institutions that have learned to recall certain fragments of the message and to completely forget, or exclude, others.