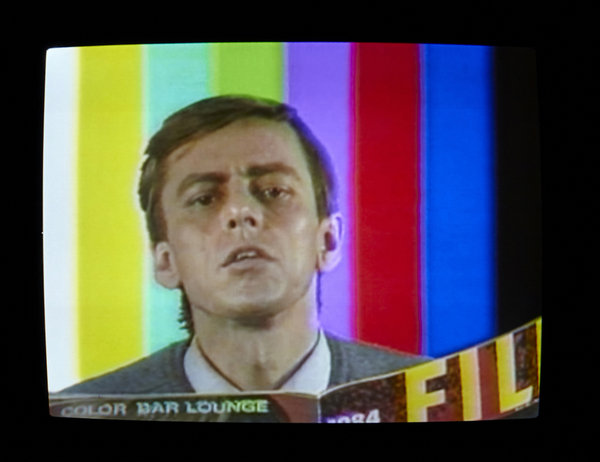 Exhibition design Julie Ault / Martin Beck "Changing Channels" investigates how art reflected and drew on the mass media of television between the 1960s and the 1980s. The exhibition presents works that show the increasing significance and the economic, technological and social mechanisms of the medium. The works in question were made at the moment when television itself had undergone fundamental changes and this in turn brought about a comprehensive revision of the relationship between art and the role of media in the public sphere.

Beginning in the mid 1960s, artists around Fluxus and the Expanded Arts such as Nam June Paik, Stan Vanderbeek or Wolf Vostell made use of the technical potential of manipulation for disruption or aesthetic transformation inherent to the electronic image. Using the audio-visual effects of feedback and interventions in the televisual apparatus, it seemed that new forms of participation and a comprehensive transformation of the existent structures of communication might be possible. Artistic and activist collectives such as Ant Farm and Raindance showed dramatically in their media performances and with their use of video cameras how television functioned as a means of mass dissemination, and through showing this, what was hidden or withheld in the process.

During the 1970s, conceptually motivated artists explored the relationship between the art space and the public sphere found in mass media. David Lamelas, Peter Weibel, Valie EXPORT, Dan Graham, Sanja Ivekovi ́c and Dara Birnbaum looked closely at the connections between art, information and communication, concentrating especially on the language of television and its consciousness-forming effects. Their works were also shown on public television such as ORF and ARD and also on cable channels.

Artistic challenges to the TV image often concentrated on the entanglement of the public and the private sphere inherent to the medium, especially the dynamic of televisual self-expression and models of identification — with artists such as Andy Warhol working with the implications of a culture of fame or with Yoko Ono and John Lennon using mass media presence for political-artistic objectives.

Their works illustrate not only the direct connections to the logic of commercial merchandise and the economics of brand names but also draw explicit parallels between the image of the artist and the cult of personality and stardom in television. Andy Warhol’s TV will take over the entire space of the MUMOK Factory, a show that ran with 42 episodes on MTV and other channels, with stars such as Grace Johns, Jerry Hall, John Oates and Blondie.

As an aspect of the rapid changes during the 1970s that brought about a diversification of the media landscape, the spectators were increasingly addressed as ambivalent consumers who developed their own unique ways of using the medium. At the point where television had long become a self-evident fixture in everyday life, artists such as Judith Barry, Michael Smith and Ilene Segalove dealt with increasing intensity with the paradoxes of mass consumption and entertainment in their work.