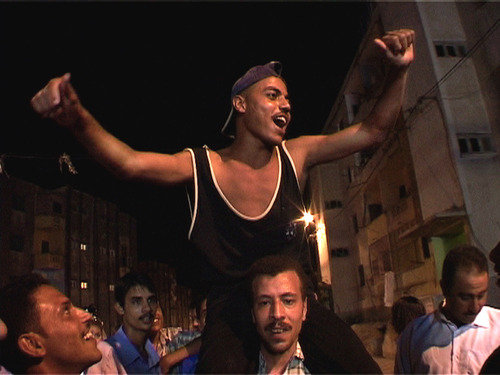 The Mafrouza cycle comprises five films shot by Emmanuelle Demoris over a two-year period in the neighborhood of the same name, a shantytown built by its inhabitants on the remains of a Greco-Roman necropolis in Alexandria, Egypt. The area has since been destroyed, but the film captures to a remarkable degree the very special people who lived here-their daily lives of struggle and happiness, and the special strength and heterogeneity of the community. Built progressively with the people of Mafrouza, each film finds its protagonists organically, and allows them to determine its particular narrative arc. The five films of the Mafrouza cycle will be screened once each in chronological order; each is an autonomous work that can be appreciated independent of the others. The series concludes with a special Modern Mondays event featuring a discussion with Demoris. All films are directed by Emmanuelle Demoris and in Arabic with English subtitles. For the last installment of MoMA's performance series Performing Histories: Live Artworks Examining the Past, the Museum presents King's Fool by Los Angeles-based artist Simone Forti. One of several key figures of the 1960s minimalist dance movement, Forti defined a new language of physical movement. In this new work, premiering at MoMA, Forti draws on one of her ongoing projects, News Animations, which was initially developed in the 1980s. (The Michael Ovitz Family Gallery, fourth floor, March 6 and 7, 3:00 p.m.; March 8, 5:00 p.m.). Also, Wednesday, March 6, The Museum of Modern Art will host The Armory Party, a benefit event celebrating the opening of The Armory Show. This event will feature a live music performance by Solange in the Agnes Gund Garden Lobby, along with a V.I.P. hour from 8:00 to 9:00 p.m.