Kicking off the single most important art weekend in the Americas will be a star-studded, grand Opening Night Preview Gala benefiting the Museum of Modern Art, New York. The Armory Show is one of the world's leading international art fairs and the largest devoted exclusively to contemporary art. The Armory Show 2002 will present more than 170 international galleries, including many of the most important contemporary dealers showcasing new art from around the world. 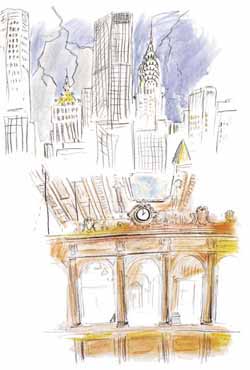 Eagerly anticipated, opens the fourth annual exhibition of The Armory Show, the International Fair of New Art.
Kicking off the single most important art weekend in the Americas will be a star-studded, grand Opening Night Preview Gala benefiting the Museum of Modern Art, New York.

The Armory Show is the successor to the highly acclaimed Gramercy International Art Fairs that attracted thousands to their New York, Los Angeles and Miami shows between 1994 and 1998. The Armory Show was first presented in February 1999 at the 69th Regiment Armory, the very site of the now legendary Armory Show of 1913 that introduced modern art to America and for which The Armory Show is named.

Exhibited artworks in the 2002 show will include painting, sculpture, drawings, multiples, editions, works on paper, photography, installations, and video.

Artist Karen Kilimnik has created a series of original drawings that have been incorporated in all visual materials associated with the fair. This is the first of an ongoing series of annual commissions to be awarded to a different artist each year, honoring The Armory Show9s commitment to living artists.

Directions
Piers 88 and 90 are located on Manhattan's far West side on the Hudson River (Twelfth Avenue) at 48th and 50th Streets in the Passenger Ship Terminal complex. The piers are easily accessible by public transportation, taxi, and private vehicle. The nearest subway stop is four cross-town blocks east at 50th Street and Eighth Avenue

Mass Transit
The piers can be reached by public transportation via the Eighth Avenue subway, E or C trains to 50th street, then via M50 bus line. The M50 bus runs West on 49th Street (to the piers) and East on 50th Street (from the piers) connecting at Eighth Avenue (E or C subway) and at Seventh Avenue (1 or 9 subway). Also, bus lines M16 and M42 provide service to 42nd Street and Twelfth Avenue. For subway and bus information and schedules, call (718) 330-1234.

Parking
Roof top parking is available for all visitors and exhibitors. No reservations are necessary. Only cash and travelers checks are accepted. For more information, call (212) 246-5450. Additional public parking facilities are available across Twelfth Avenue and throughout the neighboring vicinity.

Opening Night Preview Gala
The Opening Night Preview Gala is a benefit for Exhibition Fund of The Museum of Modern Art, New York. The Gala takes place on Thursday, February 21, 2002. The event opens at 4:30 pm for Patron ticket holders and at 6:30 pm for Friend ticket holders. Because this is a benefit event, attendance is by ticket only. The Museum of Modern Art (MoMA) is coordinating the mailing of invitations and the sale of tickets. The Armory Show, Inc. does not organize this event. Ticket prices for the opening night preview gala are $500 (Patron) and $250 (Friend). For information and tickets, call the MoMA Special Events staff at 212.708.9680 or email specialevents@moma.org.

General Admission Tickets
Admission tickets are available at the door during Show hours. Advance purchase is not required; reservations are not accepted.

Catalogue
The official catalogue of The Armory Show features a detailed profile of each exhibiting gallery. Copies may be purchased at the Show for $15.