Presentation and conversation with Monika Weiss and Alex Rivera. nomads&residents invites artists, guests, curators, critics, activists, travelers and passers-by to present insight into their practice, their ideas, histories, and drives. A forum for visitors in the arts: making connections, supporting networks, setting up meetings. 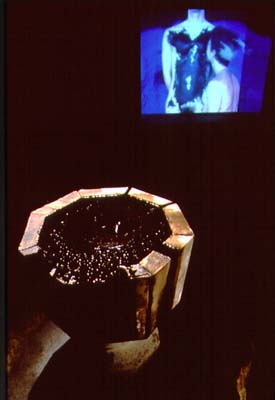 A presentation and conversation with Monika Weiss and Alex Rivera. A forum for visitors in the arts: making connections, supporting networks

Alex Rivera is a New York based digital media artist and filmmaker. Through the past 5 years he's made work in digital video and on the internet that addresses concerns of the Latino community through a language of humor, satire, and metaphor. His work has been screened at The Museum of Modern Art, The Guggenheim Museum, Lincoln Center, on PBS, as well as at film festivals, universities, libraries, union halls, and community centers. Rivera has received support from various foundations including The Rockefeller Foundation, The Sundance Institute, Creative Capital, The Jerome Foundation, The New York Foundation for the Arts and The US/Mexico Fund for Culture.
To view some of his work, including his "longer dance re-mix bio" http://www.alexrivera.com

Monika Weiss collides intuition with concept, private narrative with history in multi-media installations. Working with drawing, photography, object, sound and video projection among others, the artist confronts Inflecting presence of catholic imagery in her work and in her interest in body as cultural signifier and physical envelop manipulated within a scene.

(Brief Bio) MFA Warsaw Academy of Art, Poland; exhibited in galleries and art centers in Warsaw, Amsterdam, Rotterdam, Paris, Luxembourg among others, works in collections of Albertina Museum in Vienna(Austria) and Contemporary Art Museum in Lodz (Poland). Art residency at Georgia State University and Visiting Artist at Spelman College,Atlanta College of Art and more recently at the University of Maryland. Moved to New York area in 2001.
Some reviews of her work at:
http://www.artnet.com/magazine/reviews/byrd/byrd11-17-98.asp
http://www.creativeloafing.com/archives/atlanta/newsstand/010497/aarts.htm

Big cities are in a continuous flux, with a coming and going of people who settle in, stay temporarily or move through. Newcomers enter this flux, become part of the life of the city, and make connections with others. The city, as a space, contains possibilities through the dynamic relationships between people, which may provoke an active engagement. Strangers become friends, ideas become practice, models are being transformed into action. NOMADS & RESIDENTS makes connections with people who live here and with people who visit, by setting up an active network of collaborators, and creating and organizing public events in a variety of places. NOMADS &RESIDENTS invites artists, guests, curators, critics, activists, travelers and passers-by to present insight into their practice, their ideas, histories, and drives.

The curatorial and organizing group of NOMADS & RESIDENTS consists of New York based and temporary residents. They actively seek out information about who is coming to New York and when, they invite guests to present his/her ideas and solicit the involvement of spaces where these presentations can take place. They welcome advice, ideas and the enthusiastic support of others. The events will be partly informal and casual, and will focus on exchanging ideas, initiating new projects and networks. They will also include short presentations, lectures, talks, sideshows, small exhibitions, performances, discussions. Priority will be given to proposals that could become projects that will be shared among the participants, to a practice that can make resources and ideas available for common use.

For more information or suggestions for the program, contact us via email