Only that which is alike differs
Deleuze 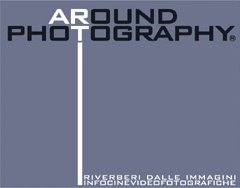 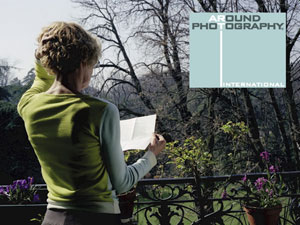 When the emergency becomes rule ?

The invisible power of post-industrial technology? 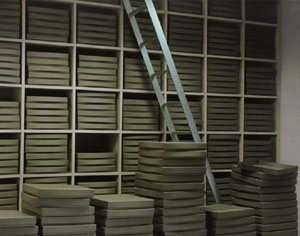 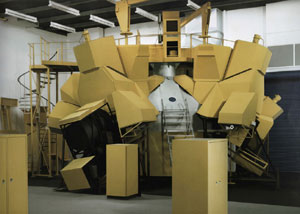 Interiors have always been a privileged subject for Thomas Demand. His interiors belong to the architectural order in their opposition to the outside,1 but above all they belong to a subjective order, as memory spaces shaped by the continuous osmosis between the private and the public sphere.
Readers of Around Photography are already familiar with this German artist’s working process precariously poised on the border between sculpture, installation and photography.2

Let’s recall it briefly: Demand constructs full-size cardboard environment that are immediately destroyed after being photographed by the artist. The photographs share a linguistic desolation for the cardboard environments are consistently bereft of human presence and cultural indexes (letters, numbers, etc.) These are interiors evacuated of all signs.
The subject matters of these ephemeral reconstructions are derived mostly from the mass-media visual order that constitutes the artist’s research field. “As an artist,” he claims, “I want to attain a position where I’m not just consuming my surroundings, but am somehow actively helping to shape them.”3

Here, the artist’s “surroundings” must be understood in their cultural scope, that is as media landscape, the postmodern territory of the image. Yet, the attentive beholder of Demand’s photographs is bound to find cracks and imperfections that destabilize him about the real nature of the photograph’s subject: unnaturally sharp edges, loose sticking and unexpected stiffness all betray the precariousness of the photographed environment and make its actual identity rather eerie. But let’s turn back to the interiors.
In Archive (1995), Demand constructs and photographs the film archive of German director and photographer Leni Riefensthal, the controversial author of the most spectacular Nazi propaganda. Featureless cardboard boxes are orderly piled in a bookcase whose plain grid-like pattern is reminiscent of modernism. We might believe the boxes contain film reels if the only one open box did not reveal itself to be empty. This emptiness is powerful enough to undercut the whole archive, this omnivorous model of systematization that, since positivism, is the foundation of Western knowledge and its intimate shelter. Indeed, Archive shows it to be a deserted beehive.

Space Simulator (2003) is one of Demand’s most ambitious undertakings. Again, it is a life-size reproduction based on a 1960s photograph of the NASA space simulator. The photograph caught the artist’s attention for several reasons: first, the formal complexity of the simulator, its “illogical structure,” reminded him of deconstructive architecture and cubist painting. Second, Demand was impressed by the similarity between the NASA room and his own studio. Third, Demand was intrigued by the tautological potential of this image that shows the simulator and not the simulation, in the same way as his photographs put forth facades of a reality that cannot be experienced. In its questioning the concept of reality, Space Simulator epitomizes Demand’s poetics and makes a stand in the entangled contemporary debate about simulation.
In the first chapter of “Simulacra and Simulation”, Jean Baudrillard visualizes the “precession of models” as a Möbius strip, a circulatory system where it is no longer possible to locate the origin of meaning.4

In Baudriallard’s semiotics the sign “looses” its referent since simulation eradicates the epistemological roots of representation, i.e. the very “principle of equivalence between the sign and the real,” and leads us toward the loss of reality. In this system, simulation is completely de-territorialized, utterly a-referential in its own self-referentiality. The circular mode of Demand’s creative process seems to echo the structure of Baudrillard’s hyperreal for the artist chooses a photograph whose material referent is a priori irretrievable, he brings it back to three-dimensional life, takes a photograph of it and finally dispenses with the “subject matter.” Thus, in this reiterated dilution of the referent, the matrix of the picture is lost more than once to the extent that it becomes impossible to determine whether the deception lies in the sculpture, in the photograph, or in the real itself. Once this doubting process is set off, it proceeds backwards prompting the beholder to reflect upon the nature and origin of his own perception and destabilizing his instinctive faith in optical realism, that is in the inveterate convention equating the visible and the real.
Nonetheless, it would not be correct to hold Demand’s work to be a punctual demonstration of Baudrillard’s hyperreal for this theory presents significant pitfalls that have been clearly discussed by art historian Jonathan Crary.5

The shortcoming of Baudrillard’s system, he claims, is that “it excludes any sense of breakdown, of faulty circuits, of systemic malfunction.” Yet, this “sense of breakdown” always runs across Demand’s photographs in the form of tiny environmental interferences, the cracks and flaws mentioned earlier, that first prompt the viewer to question what is on the other side of the photographic surface, and then have him suspect of photography’s truth value. For it is precisely on these “paths of escape”6 from the photographic illusion that the credibility of the picture is undermined the most, and the faith in optical truth, that is in the linear relationship between the visible and the real, is shaken from within. Demand is alive to this potential of his work: “I don’t believe that anything in my art will help kick-start the maturity of the beholder. But it’s at least an attempt to elude the passivity of a situation.”

Indeed, the viewer’s passivity breaks down in the act of pondering over the images’ incongruence for the viewer comes to weave a critical relationship not only with its subject matter but also with the medium of representation, namely photography.
If I maintain that, by virtue of its minuscule and willful imperfections, Demand’s practice cannot be grounded on Baudrillard’s sleek monolithic simulation and his order of a-referential simulacra, it is only to turn to Gilles Deleuze’s rehabilitation of the simulacrum to which Demand’s work can be more profitably ascribed. In the essay “Plato and the Simulacrum,” Deleuze revalues the platonic proscription of simulacra, and Baudrillard’s hyperbolic version of it, to put forward a crucial differentiation between the copy and the simulacrum.7
In his view, while the copy is a “rightful claimant” authorized by its internal resemblance to the model, the simulacrum disguises an internal dissimilitude from the model under the mask of a mere external resemblance. In other words, whereas the copy partakes in the spirit, in the very essence of the model and therefore is the positive outcome of a correct understanding of the Idea, the simulacrum achieves this effect by fraud because it exploits its appearance to conceal its essential dissimilitude from the model. The photographs of Thomas Demand belong to this order of simulation for underneath the apparent repetition of a model, they hatch the germ of the difference. They do not belong to genealogy of the model for they do not simply “copy” it but, as we have seen, they create it anew.
The cradle of the contemporary debate about simulation is Plato’s allegory of the cave where chained men mistake shadows for reality. But the cave cannot be reduced to the site of human ignorance for it accrues multiple meanings: it is nature’s architecture, the primal dwelling, a hypogeal landscape, a site of secrets and discoveries, darkness and illuminations, a stratification of matter and time. It is a void in the earth’s mass, an interior par excellence. Demand confronts this extensive cultural archive in his last monumental feat realized in 2006 and presented again last June by the Fondazione Prada at the Fondazione Cini in Venice in an unprecedented installation that wilily mirrors the exhibition title: Processo Grottesco. In this case, Grotto is a photograph of full-size cardboard reconstruction of a cave modeled after a postcard of Majorca’s caves. It took two years and high-tech computer technologies to make the 900.000 cardboard layers that compose the sculpture. The installation strategy at the Fondazione Cini is especially significant in that not only it showcases “the remains” 8 of the research process that led to the realization of the work (hence the title’s irony) but it also displays the sculptural environment that here, for the first time, it is not destroyed but exhibited. Therefore, it is worthwhile to revisit the spaces of this exhibition curated by Germano Celant. The first room was dominated by the enigmatic presence of the photograph Grotto. The second room showcased the heterogeneous archive of all the sources (from visual arts, to literature, cinema, and theatre) gathered by the artist in which a grotto figured. Finally, as landing-place of the exhibition route, the cardboard sculpture of the cave loomed in the shade of the last room and, by virtue of its position, it rose to the status of model, the Ideal grotto. Yet, it is a model made of paper, the plastic material privileged by the artist because, in his words, it is “the material of ideas.”

Note
1.“Architecture is always about the definition of what is inside and outside – what is public and what is private” B. Colomina, Domesticity at War: Beatriz Colombina and Homi K. Bhabha in Conversation in “Artforum” XLV n.10 (Summer 2007), p.443

6.T. Griffin, Faulty Towers: The Legacy of the Impassive Eye in Contemporary Germany Photography, in “Art on Paper” n. 3 (1998).