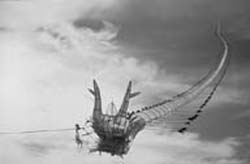 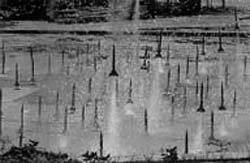 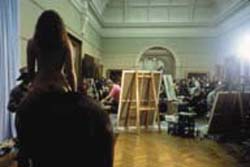 Born in 1957 in China Cai Guo-Qiang has resided in New York since 1995. But it was during the mid-1980s - having just settled in Japan where he would stay for some ten years - that Cai Guo-Qiang invented an artistic language of his own: using gunpowder explosions. Preparation, positioning, and performance using the explosive powder go towards a final effect which can be achieved both indoors and out. Influenced in equal doses by Oriental philosophy based on the exchange between Man and Nature and contemporary cosmology (in particular the Big Bang theory), Cai Guo-Qiang provides us with a global vision that goes beyond the terrestrial framework to focus our attention on ecological problems which appear to be situated outside of the physical confines of the planet. The involvement of elements of nature and alchemy in his work (fire, water, earth, air)
along with the presence of oriental practices (gunpowder, medicine, philosophy and so on), in other words citations from
traditions in the world today, is not merely an attempt to level criticism at modernity.
It suggests a desire to demonstrate that modernity can be reinvented within a space of hope; a space where the particularities of nation, culture, history, and politics are of scant importance.

Evelyne Jouanno: Starting with gunpowder, you went on to develop a whole series of projects, the most outstanding of which are the Projects for Extra-terrestrials, large-scale environmental works that are to be perceived beyond the realm of our planet, the 32nd version of which (I'm the Bug Y2K) was recently presented at Vienna's New Kunsthalle. Why such insistence on
extra-terrestrials?

Cai Quo-Qiang: Back when I lived in China I was already fascinated by the cosmos, something which is very much to the fore in oriental thought. Later, in Japan, I started to work with scientists and cosmologists, a collaboration I would subsequently develop in all the cities I was invited to. Today, scientists the world over are unanimously predicting that this millennium's big discovery will be life on another planet. I believe that should extra-terrestrials ever make it to Earth, it will be because both they are more intelligent and more technologically advanced than us. Such an event would turn our perception and our knowledge of the world and things completely upside down. Now that we are becoming more and more aware of the considerable havoc man has wreaked on Earth, the way he has practically consigned the planet to destruction, the issue is all the more urgent, and I for one am taking it very seriously. These projects in no way set out to prove the existence of extra-terrestrials. What I am trying to say, first and foremost, is that we should now be looking beyond the terrestrial frame of reference in order to come to terms with what humans have done to the planet. (To be continued in the magazine.)

(Translated from French by Christopher Martin) Evelyne Joanno is a critic and curator based in Paris.