Yearning, Devotion and Fulfilment in works from Edvard Munch to Emil Nolde and Picasso. The exhibition presents a 20th century kaleidoscope of ideals, designs and visions in matters of love, delighting our gaze with motifs of that "many-splendoured thing" that haunts the minds of artists and viewers alike. Six chapters, each one comprising significant paintings, sculptures and works on paper that exemplify the particular approaches of the artists to the theme. 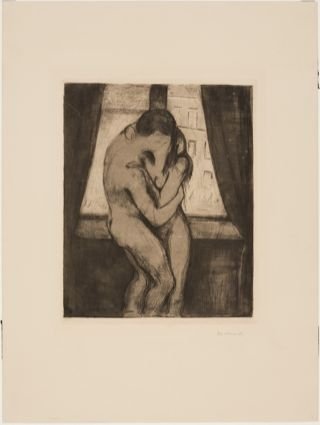 Love and the stories that are woven around it have forever been a social fact and an elementary theme of art. The exhibition "Love Stories" presents a 20th century kaleidoscope of ideals, designs and visions in matters of love, delighting our gaze with motifs of that "many-splendoured thing" that haunts the minds of artists and viewers alike.

The forthcoming exhibition is not just an excursion through love stories in pictures painted by artists between the years of 1900 and 1960, but much more. It devotes itself to this great theme in six chapters, each one comprising significant paintings, sculptures and works on paper that exemplify the particular approaches of the artists who created them.

The exhibition commences – under the topos of twosomeness – with motifs by Edvard Munch and Emil Nolde, motifs burdened with anxiety, yearnings and ideals.

These are followed by representations of love by Ernst Ludwig Kirchner, Karl Schmidt-Rottluff, Erich Heckel, Max Pechstein and Otto Müller, who interpret the theme as a facet of a Utopian design for living.

Far removed from the Expressionist visions of the "Brücke" artists is the notion of lost innocence under the social conditions prevailing in the 1920s and 1930s, this being the theme of the exhibited works of Neue Sachlichkeit (New Objectivity).

Operating on a completely different level are the exhibited works of Henri Laurens, Pablo Picasso and Fernand Léger. In their archetypes and allegories of love, these artists blend love and art into a single cohesive unit that nonetheless remains but an artistic vision.

Such Surrealist artists as Paul Klee, Joan Miró, Hans Bellmer and Max Ernst provocatively evoke the day-dreams and night-dreams of love, dreams of unfathomable depth into which they plunge themselves and the viewer unquestioningly, exploring and analysing the phenomenon of love in art with what seems to be absolute neutrality.

Following the historical break of 1945, themes of love again took on an existential significance in art. Typical exponents of the art of the 1950s are Ernst Wilhelm Nay and Henry Moore, for whom love is but a fragment of a forlorn humanism whenever their works have human contact and closeness as their theme. Even the religious connotation of the theme in the work of Marc Chagall dissolves into a natural affirmation of life.