Lehner's forthcoming solo exhibition marks a departure from rectangular format paintings with a new series of large-scale circular works. The exhibition's title Perihel (English: Perihelion) takes root from the Greek 'Peri' meaning near and 'Helios' - the sun. A celestial body reaches Perihelion at the point where its orbit passes closest to the sun. 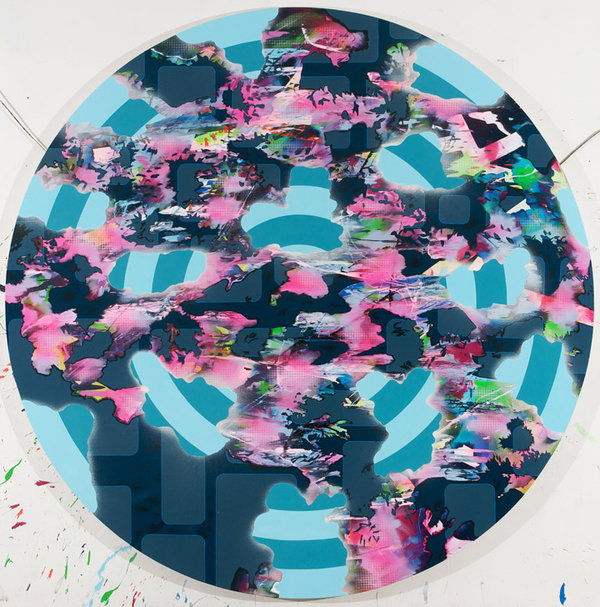 The exhibition’s title Perihel (English: Perihelion) takes root from the Greek ‘Peri’ meaning near and ‘Helios’ – the sun. A celestial body reaches Perihelion at the point where its orbit passes closest to the sun. Earth reaches its shortest station from the sun every January. On this day the sun falls slightly more intensely on the globe – an almost imperceptible event on our planet - yet one causing violent changes of state in planets with a more elliptical orbit such as Mars and Pluto.

The circle is an ancient symbol present in almost every culture throughout the history of civilization and is seen as an intrinsically perfect, even divine, motif in its qualities of wholeness, unity and the infinite.

Circles are a recurring feature in Tobias Lehner’s paintings, a symbol brought to the fore in this new body of work where activity on the canvas - ‘abstract shapes of colour, tectonic collisions of fields of paint atmospherically charged geometric and technical forms, a profuse mass of organic mutations’ - is given a new boundary, released from the squared off edges of a traditional canvas. Lehner’s circular paintings, characteristically composite layers of motifs drawn from various visual sources are cosmos-like in layout and composition.

Carl Jung began looking at the importance of Mandalas - the Sanskrit word for circle through his study of eastern religion. Spiritually important to Hindu and Buddhist belief Mandalas can also be found in North American sand painting and Medieval and Renaissance alchemical drawings. Jung saw a universal significance in these concentric diagrams in terms of representing the self rather than the ego - focusing on the central point in the psyche to which everything is returned:

‘The "squaring of the circle" is one of the many archetypal motifs which form the basic patterns of our dreams and fantasies. But it is distinguished by the fact that it is one of the most important of them from the functional point of view. Indeed, it could even be called the archetype of wholeness’.