Simple Materials Are Transformed in Site-Specific Installations. Group exibition. The artists will use paper, plastic, rope, fishing line and more to alter the existing spaces or create autonomous environments within the galleries. The exhibition reflects two trends in current art practice that have been evolving since the early 20th century: the embrace of non-art materials and the artwork's engagement with both time and space. 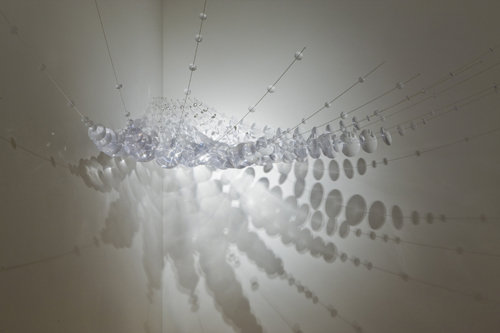 Beginning April 24, 2010, MASS MoCA's second- and third- floor galleries will be transformed by a series of immersive, site-specific installations made from unexpectedly humble materials; the artists of Material World: Sculpture to Environment will use paper, plastic, rope, fishing line and more to alter the existing spaces or create autonomous environments within MASS MoCA's galleries. The exhibition reflects two trends in current art practice that have been evolving since the early 20th century: the embrace of non-art materials and the artwork's engagement with both time and space. Michael Beutler, Orly Genger, Tobias Putrih, Alyson Shotz, Dan Steinhilber, and collaborative team Wade Kavanaugh and Stephen B. Nguyen are all known in part for their use of simple materials. Material World will be on view through February 27, 2011.

At MASS MoCA, the artists will create their work against - or in concert with - the backdrop of the museum's reclaimed factory space, its history, and its own rich assemblage of brick walls, wooden columns, steel beams, and multiple layers of paint. While the artists are themselves using industrial materials, theirs tend to be strikingly more delicate: weightless plastic sheeting, wafer-thin layers of aluminum, translucent plastic, and rolls of paper. The kind of materials produced in a factory are now the stuff of art in a factory transformed into a museum.

The installations - which create a diversity of visceral, spatial, and perceptual experiences - are unified by the artists' manipulation of modest materials and their focus on a single (or very limited palate of) material in a given work. A method of accumulation and the distinct use of repeated forms also connect the works which exploit the formal or structural characteristics of their material, and variously reference their historic, social, or symbolic associations. Some of the works could be interpreted as a dialogue on recycling and the use of materials in a consumer society. Other artists approach their materials from simultaneously utilitarian and utopian perspectives. Others find in them a vehicle for changing our perceptions and understanding various immaterial elements of the physical world that act upon them. Together, the installations offer experiences from the physical to the psychological and perceptual, and perhaps even to the political.

Working in everything from brightly colored tissue paper to Pecafil (a vivid yellow, biodegradable building material), Michael Beutler (born 1976, Oldenburg, Germany, lives and works in Berlin) re-interprets standardized building components as well as familiar building styles in his architecturally inspired work. Characterized by a decidedly DIY style, Beutler's process remains visible in his finished constructions, a reference to the manual labor that has been under-valued and often erased from view in industrial society. The spontaneous look and exuberant colors of his works introduce a level of playfulness to his installations that is at odds with standard Western views of building and offers a new idea of what architecture might be. The artist's fragile, built environments respond to the transitory nature of the urban environment as buildings go up, come down, or linger in uncompleted states.

Created with over 100 miles of rope, which she knots by hand into thick plaits, Orly Genger's (born 1979, New York City, lives and works in New York, N.Y.) new project for MASS MoCA is her most ambitious installation to date. Genger first began working with rope in 2003 and quickly saw the potential in the physicality of the material and how her oddly shaped and colored objects - which exist somewhere between painting, textile, and sculpture - commanded space. Grappling with the male-dominated history of sculpture, and the legacy of the Minimalists, in particular, Genger introduces a traditionally female-identified craft process - an adaptation of a crochet stitch - and its association with intimacy and domesticity into an artistic idiom characterized by industrial production and bravado. And yet her massive, weighty works have a forceful presence. At MASS MoCA she will install a floor-to-ceiling wall of rope, and a riotous spill of the material will nearly fill the gallery. Both elements will force museum visitors to rethink their path, navigating around and through her immense work. Painting the rope a vivid red, Genger has compared the effect of viewing the piece to looking into the sun.

Influenced by the utopian projects of innovative artists and designers such as Buckminster Fuller, Frederick Kiesler, El Lisstizky, and Charles Eames, Tobias Putrih (born 1972, Kranj, Slovenia, lives and works in Cambridge, Mass.) likens his work to experiments or prototypes. Interested in creating spaces for both spectatorship and participation, many of his works are informed by the architecture of the cinema and its location between fantasy and reality. His use of a range of cheap materials like egg crates, tape, cardboard, and plywood offers, according to the artist, freedom to make mistakes and to start again. The precariousness of the materials and his structures infuse the works with both a sense of potential and of possible collapse. Putrih's piece at MASS MoCA was inspired in part by the nearby Hoosac Tunnel. Completed in 1875, this engineering landmark regularly draws adventure-seekers and ghost-hunters daring the rather dangerous walk through the five-mile tunnel.

Preferring materials not usually associated with art, Alyson Shotz (born 1964, Glendale, Arizona, lives and works in Brooklyn, N.Y.) has worked with mirrors, piano wire, glass beads, acrylic, string, and various forms of plastic. Reflective and transparent materials reoccur in many of her sculptural installations which focus on light and space and often provoke a shift in the viewer's perception (or misperception) of their surroundings. While space is Shotz's primary medium, an active spectator is integral to her work, which she expects will look different from one moment to the next. Influenced by the fields of math and science, and intrigued by light, wave patterns, and orbits of electrons, Shotz strives to make the invisible visible, expressing materially the spatial dimensions of string theory, for example, or the effects of hyperbolic space. At MASS MoCA Shotz will install a site-specific version of her work Phase Shift, an installation of plastic lenses and glass beads strung on wire from one end of the gallery to the other. Transforming the gallery into a play of light and shadow, the artist based the work on the idea of "capturing the mysterious in-between states of matter: when solid becomes liquid or vapor."

Dan Steinhilber's (born 1972, Oshkosh, Wisconsin, lives and works in Washington, D.C.) work begins with the relationship we have to everyday materials. While his sculptural reconfigurations of experiences - such as opening a restaurant "to-go" container or filling a shopping bag - maintain associations to the domestic, the industrial, and the consumer, they also have a sense of humor and what he calls "poetic misunderstandings of natural systems." In his works, rows of clothes hangers cascade to the floor like a waterfall; Styrofoam packing peanuts blow and swirl like a tornado. The artist often employs common household tools that, he writes, "people use to assert control over their surroundings: vacuum cleaners, lawn mowers, weed whackers, fans, heating lamps, garage door openers, and trash cans." Steinhilber's use of packing peanuts, plastic bags, and tarps lends itself to experiments with gravity - and short-lived, but magical, efforts to thwart it. Likewise, his work with air, liquids, and static electricity articulates his interest in the ephemeral nature of things. At MASS MoCA, museum visitors will be able to enter what might be described as the reverse of an inflatable - a space created with the help of an exhaust fan and the air pressure within the museum. The installation continues Steinhilber's investigation of what he calls "the performative, kinetic, contingent space of sculpture."

Wade Kavanaugh (born 1979, Portland, Maine, lives and works in Brooklyn, N.Y.) and Stephen B. Nguyen (born, 1976, Little Falls, Minnesota, lives and works in Brooklyn, N.Y.) have been collaborating since 2005, though they each maintain independent studio practices. Their large-scale, site-specific installations - crafted from thousands of feet of paper which they variously stack, roll, twist, and drape - transform sites into unexpectedly breathtaking environments. At MASS MoCA, the artists re-create a decaying, old growth forest within the galleries. By using paper to craft trees - the source of their medium - the artists are working in the realms of both the symbolic and the real. Spanning two floors of the museum, the installation will appear to grow from one space into the next, the twisted roots of the built "forest" on the third floor seen on the level below. Made with white paper, the giant trees have a ghostly presence. The artists' image of a deteriorating, natural environment mirrors the fading industrial landscape embodied by the museum's buildings, while simultaneously hinting at cycles of renewal.

Material World will include a reading room created by furniture designer Eli Levenstein (born, 1978, Englewood, New Jersey, lives and works in New York, N.Y.) Working with readily available, off-the-shelf materials including twine, paper clips, bubble wrap, extension cords, and textiles, Levenstein makes works that function as useable objects and as sculpture. By "redefining environments" with his furniture, the designer questions existing notions of utility and value while addressing individuals' relationships to one another and to their surroundings.

Material World will be accompanied by a fully illustrated catalogue featuring an essay by curator Susan Cross and interviews with the artists. The catalogue will be available in June.

The exhibition is made possible by an Emily Hall Tremaine Exhibition Award. The Exhibition Award program was founded in 1998 to honor Emily Hall Tremaine. It rewards innovation and experimentation among curators by supporting thematic exhibitions that challenge audiences and expand the boundaries of contemporary art.
Additional support provided by Donald R. Mullen, Jr. and The Coby Foundation, Ltd. Special thanks to Gulf of Maine Lobster Foundation, the New England Ropes Corporation, and Two Trees Management.

About MASS MoCA
MASS MoCA is an independent 501C3 whose operations and programming are funded through admissions and commercial lease revenue, corporate and foundation grants, and individual philanthropy. Except for an initial construction grant from the Commonwealth, and competitive program and operations grants from the National Endowment for the Arts and the Massachusetts Cultural Council, MASS MoCA is privately funded: 90% of annual operating revenues are from earned revenues, membership support, and private gifts and grants.

MASS MoCA
87 Marshall Street, North Adams MA
11am -5pm every day except Tuesdays
admission is 15 for adults, 10 for students, 5 for children 6-16, and free for children under 5