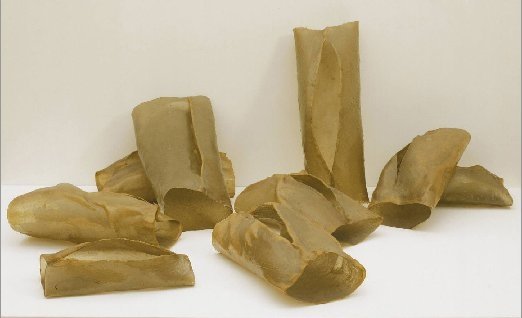 In the latest of its Notations series, which focuses on contemporary works from its permanent collection, the Philadelphia Museum of Art will pair sculpture from its holdings with selections from the Sonnabend Collection, New York. Notations/Forms of Contingency: New York and Turin, 1960s-1970s, will include important sculptures and installations by 13 artists who figured prominently in the development of both Post-Minimalism and Arte Povera, two of the most significant artistic currents of the late 1960s. Featuring works by Eva Hesse, Robert Morris, Mel Bochner, Alan Sonfist, Bruce Nauman, Mario Merz, Jannis Kounellis, Barry Le Va, Giovanni Anselmo, Pier Paolo Calzolari, Robert Smithson, Richard Long and Lawrence Weiner, this exhibition in the Museum’s Dennis and Gisela Alter Gallery (176) in the Modern and Contemporary galleries will chart the changing attitudes toward sculpture in this formative time period and document the importance of New York and Turin as centers of artistic innovation.

The late 1960s and early1970s witnessed a dramatic shift in sculptural practice away from the severe geometry of Minimalism towards the eccentric, energetic, and often highly expressive forms of Post-Minimalism in the United States and Arte Povera in Italy. Forms of Contingency will explore the new approaches to sculpture that emerged in New York and Turin at this time, in which a shared interest in process and the resonant use of materials gave way to an amazing diversity of formal solutions. Works on view embody the idea of contingency in their formal configurations and conceptual approaches. Produced by employing an extraordinary array of materials—such as neon, felt, glass, sound, earth, water, and found objects—they evidence a common interest in emphasizing the circumstances in which art is created.

"We are delighted to collaborate with the Sonnabend Collection on this presentation," said Carlos Basualdo, the Keith L. and Katherine Sachs Curator of Contemporary Art, "This gallery installation represents an extraordinary opportunity for our audiences to be exposed to a number of amazing works, and it brings to light the importance of New York and Turin as centers for important developments in contemporary art."

In Turin, Arte Povera (whose literal translation is "poor art") developed in a climate of political and social unrest from 1967 to 1972 and established a visual and experiential practice characterized by employing non-art materials and the engagement of artists in ephemeral activities. In this gallery presentation, works by artists associated with Arte Povera embody these themes, such as Anselmo’s Untitled (1969) in which the concreteness of an industrial steel container is counterbalanced by the transience of evaporating water. In Calzolari’s Untitled (Zerorose) (1970) a row of twenty-nine zeroes in white neon is accompanied by an audio recording in which "zero" is endlessly repeated.

In New York, post-minimal sculpture encompassed a wide a variety of approaches, represented by the diverse sculptural works in Forms of Contingency, including Robert Smithson’s Red Sandstone Corner Piece (1968) and Alan Sonfist’s Earth Paintings (1968-69)—both of which utilize soil as a material, but to very different ends. Gravity plays a key role in shaping both Morris’s Untitled (1968) felt sculpture and Hesse’s Tori (1969). Meanwhile, Barry Le Va’s One Edge, Two Corners; On Center Shattered (Variation 14, Within the Series of Layered Pattern Acts) of 1968 is the product of a prescribed action of shattering twelve sheets of glass and is created anew each time it is installed.

Taken together, the works in Forms of Contingency represent the vitality and spirit of experimentation that characterized sculptural practice in the 1960s and 1970s.

"This installation has given us a welcome chance to develop an art historical context for works from the Museum’s collection that have not recently been on view," said Erica Battle, Project Curatorial Assistant of Modern and Contemporary Art. "As installed in the Alter Gallery, the works demonstrate a pivotal moment in the history of sculpture, yet they retain a freshness and immediacy that is still undeniably radical today."

About the "Notations" Series:
Notations/Forms of Contingency: New York and Turin, 1960s-1970s is part of an ongoing series of gallery installations titled "Notations," named after the 1968 book by the American composer, writer, and visual artist John Cage, who was widely celebrated for his experimental approach to the arts. Cage’s Notations was an international and interdisciplinary anthology of scores by avant-garde musicians, with contributions from visual artists and writers. It was also an exhibition in book form, in which the scores doubled as drawings. The "Notations" series at the Museum serves as a flexible tool to explore contemporary art.