A group show focuses on the subjects crucial to art and the society of sexual diversity. 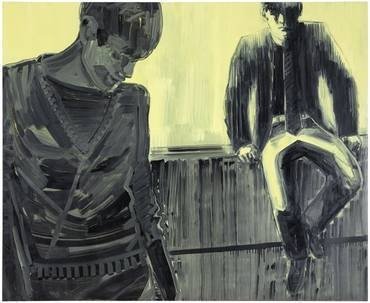 The exhibition ARS HOMO EROTICA, curated by Pawel Leszkowicz, presents over 250 artworks from antiquity to the 21 century; it queers the collection of Warsaw's National Museum and explores the work of Catherine Opie; it also presents a survey of queer motifs in East European artists: David Cerny, Anna Daucikova, Svajone an Paulius Stanikas, Karol Radziszewski and many others. This is a pioneering comprehensive exhibition of lgbt art in Eastern Europe and a breakthrough examination of queerness in East European art.

An objective of the National Museum in Warsaw is to participate in the topical processes of civil society and in creating the art of democracy. That is why the exhibition is embedded in cultural history, but leads to the world politics of human rights.

The exhibition focuses on the subjects crucial to art and the society of sexual diversity. The sections of Ars Homo Erotica include: Homoerotic Classicism, Male Nude, Iconography of Male Couples in Mythology, Saint Sebastian, Lesbian Imaginarium, Transgender/Androgyny, The Time of the Struggle and Archive.

Homoerotic Classicism: the Greek and Classicist male nude – beautiful, heroic and sensual – forms the foundation of art history and of homoerotic code. That is why a gallery of Classical sculptures will be presented in the main hall of the National Museum.

The Male Nude: formerly, the male nude constituted the rudiments of academic education and a central genre of art; it was marginalized in the twentieth century. In the art of Communist Poland, the male nude was very restricted and censored as pornography. Only in the critical art of the 1990s has the male nude returned fully, often as scandal and frequently censored. The genre triumphs in contemporary gay and feminist art as a 'subversive medium.' Censorship and restrictions on the erotic and attractive male nude in the second half of the twentieth century resulted from its identification with excluded homosexuality and from homophobic repression. Just as the female nude has formed the foundation of heterosexual art, so the male nude formed the foundation of homosexual art.

Saint Sebastian: the martyr is the most frequent iconographic image linked with the homosexual code in art history: this representation allowed to show the ecstatic and penetrated male body and, at the same time, to allude to persecutions. A number of examples from the collection of the National Museum and works by contemporary artists will illustrate the traditional theme.

The Lesbian Imaginarium: historical and mythical subjects in historical art with lesbian motifs (Sappho, Diana, Nymphs) will be juxtaposed with contemporary lesbian photography and video. The two icons of lesbian culture, Sappho and Greta Garbo will be linked with lesbian/feminist graffiti on the streets of Buenos Aires and with the found footage video of women's/homoerotic themes in the painting of art history. Nineteenth-century portraits of friendship between women and lesbian scenes-copies in the style of Courbet and contemporary art from Central and Eastern Europe (Anna Daucikova and others) will be shown.

Transgender/Androgyny: the representation of subjects and works related to going beyond the borders of genders and to androgyny which are present both in myths and in the contemporary performance of gender and in social experience.

The Time of the Struggle: the presentation of artworks about political conflicts around lgbt rights in Central and Eastern Europe with examples of visual social campaigns and video installations which document the attacked parades of equality.

The Archive: an architectural installation of the film and theatre archives of (post)modern lgbtq culture, including posters from the Museum of Posters and an interactive queer library.

The curator of the exhibition, Pawel Leszkowicz, Ph. D., is lecturer at the Department of Art History, Adam Mickiewicz University in Poznan, Poland. His texts have been published by Routledge, New York University Press, ARTmargins, Obieg, Artium Quaestiones, Kunst und Kirche, Rocznik Historii Sztuki, Zagadnienia Naukoznawstwa, Die Tageszeitung. He authored books Love and Democracy. Reflections on the Homosexual Question in Poland and Helen Chadwick. The Iconography of Subjectivity, published by a scholarly press Aureus in Cracow, and Art Pride, a survey of Poland's gay art, forthcoming in English and Polish from abiekt.pl

Leszkowicz conducted research at the Courtauld Institute of Art. in London and, as a Fulbight scholar, at the New School for Social Research in New York. His exhibitions Love and Democracy and The Empire of the Senses were presented in Poznan under the aegis of Poznan's Academy of the Fine Arts. His exhibition GK Collection reinterpreted works from Jacek Malczewski and Bruno Schulz to Andy Warhol and Katarzyna Kozyra. The second edition of his show Love and Democracy and Vogue took place in Gdansk's Center for Contemporary art Laznia. Dr Leszkowicz has authored a number of scholarly and popular texts on lgbtq art and entries in the Encyclopedia of the Polish Scientific Publishers and in the publications of the Polish Academy of Sciences.