'William Kentridge: Five Themes' features about 40 works of the past decade in a range of media - including animated films, drawings, prints, theater models, sculptures, and books. The exhibition explores how his subject matter has evolved from the specific context of South Africa to more universal stories. The Bruno Serralongue's exhibition features some 100 photographs of the last few years. His method begins with the collection of information from the media, but what interests him is not the event as such, but what happens on the margins, backstage. Satellite programm 3: Klara Liden's project, entitled Always be elsewhere, is a site-specific installation that fills and comments the architecture of the institution. 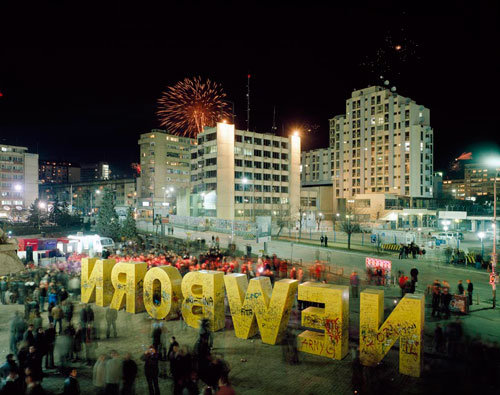 Featuring about 40 works in a range of media —including animated films, drawings, prints, theater models, sculptures, and books— "William Kentridge: Five Themes" is co-organized by the San Francisco Museum of Modern Art and the Norton Museum of Art in West Palm Beach, Florida.

Curated by Mark Rosenthal, adjunct curator of modern art at the Norton Museum of Art, in close collaboration with the artist, the exhibition brings viewers up to date on the artist’s work over the past decade, exploring how his subject matter has evolved from the specific context of South Africa to more universal stories. In recent years, Kentridge has dramatically expanded both the scope of his projects (such as recent full-scale opera productions) and their thematic concerns, which now include his own studio practice, colonialism in Namibia and Ethiopia, and the cultural history of postrevolutionary Russia. His newer work is based on an intensive exploration of themes connected to his own life experience, as well as the political and social issues that most concern him.

Born in 1955 in Johannesburg, where he continues to live and work, Kentridge has earned international acclaim for his interdisciplinary practice, which often fuses drawing, film, and theater. He first gained recognition in 1997, when his work was included in Documenta X in Kassel, Germany, and in the Johannesburg and Havana Biennials, which were followed by prominent solo exhibitions internationally.

Tours for individual visitors*: from Tuesday to Saturday at 12.30 pm
Family Tours*: Saturday at 3.30 pm

* free entrance on presentation of exhibition ticket (valid on the day of purchase only) and for members; Family Tours, by reservation on +33 (0)1 47 03 12 41 / serviceeducatif@jeudepaume.org

"For me, photography does not come first. It is mediated. It comes as a second phase, after thought, after putting in place the framework that defines the rules." Bruno Serralongue

In order to probe contemporary procedures for producing, distributing and circulating images, Bruno Serralongue “commissions” his own images from himself. His method begins with the collection of information from the media, which he uses as if they were dispatches from his own news agency, of the kind regularly sent out to newsrooms.

Based on this information, which in his case has been preselected by the editors of the various media, Serralongue then makes his own selection and, when he finds an event that particularly intrigues him, travels out to cover it. However, what interests him is not the event as such, but what happens on the margins, backstage. Beyond the event, his works and images concentrate on the interstices of information.

The exhibition at Jeu de Paume features some hundred images, covering his work over the last few years. The photographs are organised by subject and location, but also highlight recurring themes that, according to Bruno Serralongue, inform the problematics of how information is presented.

“The representation of the event in the photographs of Bruno Serralongue”: thematic tour* by a Jeu de Paume lecturer
Tuesday 29 June, 7 pm

Tour* of the exhibition by Bruno Serralongue and Pascal Beausse, critic and curator in charge of the photography collection at the
Centre National des Arts Plastiques
Tuesday 6 July, 7 pm

Tours for individual visitors*: from Tuesday to Saturday at 12.30 pm
Family Tours*: Saturday at 3.30 pm

* Free entrance on presentation of exhibition ticket (valid on the day of purchase only) and for members; Family Tours, by reservation on +33 (0)1 47 03 12 41 / serviceeducatif@jeudepaume.org

Klara Lidén often uses architectural interventions, hijacked structures and materials, and the spaces behind something else to expose some of the constructs and conventions on which society is based. For her recent Elda för kråkorna (2008), she built up a series of makeshift walls from exiting materials within a gallery to create a new invisible space to house local pigeons. Not only did it provide useless "heating for pigeons" (as its Swedish title, a local saying, is literally translated), but it made a negative space of the commercial gallery accompanied by the occasional noise of the birds.

Her project for the Jeu de Paume, entitled Always be elsewhere (or Toujours être ailleurs), will be, as with most all of her projects, a site-specific intervention, including a new installation that both fills and, invariably, comments on the architecture of the institution. She will show it with a related new video with a sound track by the music group Tvillingarna, with whom the artist has worked on several previous collaborations. Here sound and space, flicking video images and structure combine to create a haunting new interior ambiance for the lower galleries of the Jeu de Paume.

Exhibition produced with the support of the Fondation nationale des arts graphiques et plastiques, and iaspis, in collaboration with Metropole Atelier, the Cité des Arts, and the Institut suédois à Paris.