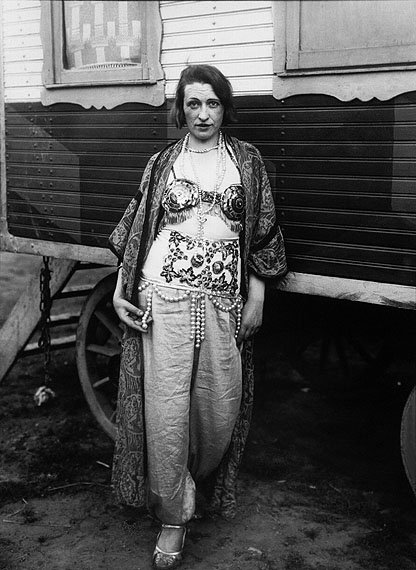 "The essence of all photography is documentary in nature", observed August Sander in one of the talks that he delivered at the Westdeutscher Rundfunk (West German Broadcasting Institution) in Cologne in 1931. With this he coined a key phrase, which was to shape his view on photography throughout his career.

August Sander gained fame with a photographic work created during the mid-1920s, entitled Menschen des 20. Jahrhunderts (People of the 20th Century), in which he brought together portraits of people from different social backgrounds and occupational categories as part of a self-conceived project that spanned decades. A hundred images from this work were first exhibited in 1927 in an exhibition at the Cologne Kunstverein and subsequently published for the first time in 1929 in Sander’s first book called Antlitz der Zeit (Face of Our Time), which featured 60 images. The photographer’s underlying objective was to create a social portrait of his time that was as multifaceted as possible, reflecting on the individual in relation to the typical traits of each social and occupational group. Comparative photography and direct observation are important keywords that characterise Sander’s methodological approach. In particular the juxtaposition of the images allowed him to draw attention to the physiognomies and body languages that were typical of different professions, genders and generations, as well as to individual and personal characteristics.

His work met with great acclaim even during his lifetime, as testified by the many reviews that were composed in response to Antlitz der Zeit for instance, by people such as Kurt Tucholsky, Lou Straus-Ernst – Max Ernst’s first wife – or Walter Benjamin. The latter in particular pointed out the educational significance of the portrait collection against the backdrop of the threat of a National Socialist rule, evoking a feeling of premonition in retrospect. In 1936, the printing blocks of Sander’s Antlitz der Zeit were destroyed by the National Socialists and any further distribution of the book was prohibited. Nevertheless Sander’s commitment to his work never waned. A greater appreciation was once again to emerge only after the Second World War. In 1952, Edward Steichen met August Sander to choose a few photographs for the exhibition The Family of Man with him. Today, these photographs (Handlanger (1928), Jungbauern (1914), Herrenbauer (1924)) can be seen at the Musée The Family of Man in Clervaux/Luxembourg. Steichen also selected a series of images that were to enter the collection of the Museum of Modern Art in New York. In 1962, two years prior to the photographer’s death, the book Deutschenspiegel (Mirror of Germany) was finally published with an introduction by the art historian Heinrich Lützeler.

In absoluter Naturtreue (Absolute Fidelity) August Sander attempted to paint a picture of his time. What he achieved was a unique and complex work of artistic and cultural historical influence and significance.

The August Sander archive has been housed at the Photographische Sammlung/SK Stiftung Kultur in Cologne since 1992, and his work is displayed to the public in various presentations and publications. The present exhibition features 100 images and as such is a representative cross section of this photographer’s main body of work, Menschen des 20. Jahrhunderts, which includes more than 600 images.