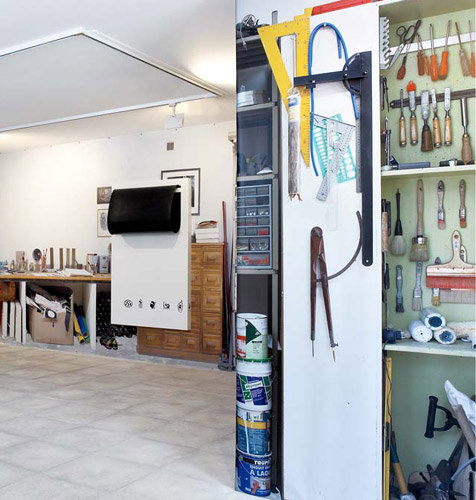 From 2 June through 19 September 2010, Mamco will play host to a myriad of shows that reveal both the variety and depth of contemporary art. Au verso des images (On the Back of Images), a new summer exhibition sequence opening on Tuesday, 1 June at 6 PM, features eight different temporary shows along with a number of new presentations of the museum’s permanent collection. Making their way through these shows, viewers will discover an important exhibition by the artist and native of Lausanne Didier Rittener that includes hundreds of drawings ; new watercolors by Yvan Salomone ; a film by Pierre Moignard, who has adapted a play by Shakespeare to the context of contemporary America ; autopsy photographs shot by Maud Faessler ; mountain landscapes by Michel Grillet ; a composite installation by Amy O’Neill based on typical objects found in American folklore ; a mirror installation featuring two works by Allen Ruppersberg and Pascal Pinaud (as part of 50 JPG) ; and finally a scaled-down version of this past winter’s retrospective devoted to Franz Erhard Walther.

This summer Mamco is bringing together a broad range of media and art practices to offer visitors an extensive panorama of artmaking today. Visitors will also have the chance to follow the ongoing efforts of several artists who have already exhibited at the museum and have been invited to show their work at a different phase or in a different light.

On the fourth floor, Libre de droits (Copyright Free) features a group of over 300 drawings by Didier Rittener. Born in 1969 in Lausanne, Rittener, a cofounder of the contemporary-art association Circuit, has been working since 2001 on this series of source-images in which motifs from the Renaissance, geometric shapes, science-fiction characters, landscapes and slogans exist side by side. Making use of multiple registers (press, film, literature), the artist crops images differently and removes certain elements from them, keeping only a few details that are isolated from their context. Reproduced in lead pencil on A4 tracing paper, these drawings form a kind of "compressed world" that recalls old repertories of images that artists once could freely reproduce. The collection is the starting point of Rittener’s work in drawing and painting, a formidable "toolbox with which he builds his fictional world."

Exhibited for the first time here, this group of drawings has been hung chronologically to form an uninterrupted line that runs from one gallery to the next on Mamco’s fourth floor. Meanwhile, like mirrors, the walls opposite these drawings are covered with vast desert and wooded landscapes drawn in black and white. Visitors, caught up in this mazelike route, are invited to take "a subjective stroll that winds between rigorous chronology and Surrealist reverie." Along with the show, an expanded version of the catalog Libre de droits, first brought out in 2004, is available, copublished by attitudes, HEAD-Geneva and Mamco.

Yvan Salomone, who was born in Saint-Malo (F) in 1957, works in watercolor and is showing on Mamco’s second floor an exhibition called Yes I will yes. The museum in this case is bringing out once again a type of display not unlike what was done in 2000 for the artist’s first show in Geneva, i.e., a large section of wall covered by some 60 new watercolors. Like Rittener’s work, Salomone’s begins by reproducing images in an identical format, which the artist then reworks and repositions. Forcing himself to follow an extremely strict protocol, Salomone executed one watercolor each week, working from photographs that focus on neglected, outlying areas where not a soul can be seen. The singularity of Salomone’s art lies in this unexpected, anachronistic encounter between the classicism of the technique and the resolutely contemporary approach to the subject. The artist, a native of Saint-Malo, has devoted an important part of his work to depicting harbors, which he later expanded to include images of building sites and other empty tracts of land. The show Yes I will yes includes an accompanying collection of the artist’s texts, published by Mamco (Le point d’Ithaque. Cahiers 1996-2006, Éditions Mamco, 2010).

On the same floor, in Kino, the museum’s screening room, we will be presenting the first work for film by the painter Pierre Moignard (born in Tabessa, Algeria, in 1961). Who chooseth me. Notes for the Merchant of Vegas (2006/2009) transposes the story of Shakespeare’s comedy The Merchant of Venice to the over-the-top context of the dream cities of contemporary America, namely Las Vegas and Venice Beach. Half documentary and half fiction, Moignard’s film plunges us into the contradictions of a "fascinating and cruel" culture.

On the museum’s first floor, a range of multifaceted worlds play out from one gallery to the next with the works of Maud Faessler, Michel Grillet, Amy O’Neill and a joint installation by Allen Ruppersberg and Pascal Pinaud. A 2006 graduate of ECAL, the young photographer Maud Faessler (born in 1980 in Zurich) stands out for the power and severity of the subjects she has chosen to tackle, i.e., autopsies, dissections and genitalia that have been removed. Insite brings together two series of works. Hôpital (Hospital) reveals the highly secret world of the underground hospitals built by the Swiss Army, while the second series, Autopsie (Autopsy), is the result of a long collaboration between the artist and a hospital staff that allowed Faessler to photograph cadavers that had been cut up as part of an autopsy for medical research. Driven by a real curiosity for what most considered to be unbearable, the artist transcribes these autopsies with a realism and fidelity that is stripped of all sentiment and subjectivity, which lends her cadavers a presence that is both banal and all the more disturbing.

First invited to Mamco in 2005, Michel Grillet (born in Geneva in 1956) now reveals another aspect of his art, a group of wash drawings from the series Montagnes-Ciel (Sky-Mountains). With an approach that is spare and restrained, Grillet has worked since 1977 on the theme of the landscape he calls Montagnes-Ciel, Ciel-Etoilé, Eau-Ciel, Mémoire de Paysage (Sky-Mountains, Starry-Sky, Sky-Water, Landscape Memory). His work on transposing landscapes revolves in the main around notions dealing with perception and memory along with a constant questioning of the image of nature and the nature of the image. A meteorologist of human sentiments, Grillet paints mountains whose minute variations of light and color seem to reflect the subtle movements of the soul.

The American artist Amy O’Neill, born in 1971 in Beaver, has spent several years in Geneva. O’Neill turns a critical eye on the vernacular culture of both her native country and her adopted Switzerland with works that focus on local folklore like Swiss chalets, country music and parade floats. By lending "reality" stage-like settings, the objects and situations that the artist creates exude an uncanny feeling. Mamco is featuring an installation made up of three sculptures, including Shrine Bed (2007), which depicts a strange bed cut from a tree trunk. Produced by a traditional Swiss sculptor, the piece is inspired by a rustic tourist attraction, The Shrine of The Pines, located in Baldwin in the United States.

As an exhibition that is meant to echo 50 JPG, En miroir takes two installations by Allen Ruppersberg and Pascal Pinaud respectively and sets them facing one another. The two pieces are based on the photographic record of the artists’ studios. Both men have in fact reworked a theme that is dear to art history. Questioning the conditions surrounding how art appears, the two pieces invite viewers to search in these images some reflection of the nature of the works created there. We are pleased to note that this show, along with the exhibition of Maud Faessler’s work, was part of the program put together by Mamco for the Printemps de Septembre Festival in Toulouse. Mamco was responsible for the festival’s artistic program in 2008 and 2009. Thus the museum is especially pleased to present these two shows to the general public in Geneva.

Finally Mamco is featuring a scaled-down version of the major retrospective that was devoted this past winter to Franz Erhard Walther (De l’origine de la sculpture, 1958-2009) by extending the run of the show for nine of the retrospective’s original thirty-five galleries.

Along with its temporary shows, Mamco is likewise highlighting its collections with many new rehangings of works that the museum owns or has on loan. The new displays vary, from a few monographic allusions (a gallery devoted to John M Armleder and another to Steven Parrino); to a homage to the Swiss photographer Balthasar Burkhard, who recently passed away; to presentations of a more thematic sort finally, notably with a new version of Modèles modèles, an exhibition of scale models first shown in 2005.