Cecelia Kane/Jim Buonaccorsi/Blaine Whisenhunt. The exhibit of 3 artists' projects focus on war's effects on society and is timed to coincide with President Obama's promised date of withdrawal of all U.S. combat troops from Iraq. Kane's 'Hand to Hand' project chronicles the events of the Iraq war since its inception in March 2003, Buonaccorsi's 'Don't Forget to Learn, Don't Learn to Forget' is a colossal long steel and cast iron sculpture, Whisenhunt's audience-participatory work, 'Weapon of Mass Compassion', is comprised of a paper shredder and a stack of over a 100 copies of images of civilian Iraqi's. 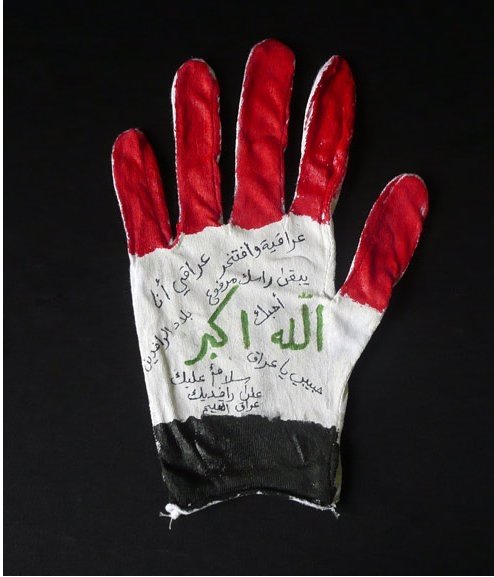 ATHICA: Athens Institute for Contemporary Art is proud to mount Mission Accomplished, an exhibit of three artists' projects, which focus on war’s effects on society. The exhibit is timed to coincide with President Obama's promised date of withdrawal of all U.S. combat troops from Iraq. With thousands of casualties since the initial invasion of Iraq eight years ago, with a total of 170,000 American troops in Iraq at the war’s peak, with hundreds of billions of dollars spent amid overwhelming controversy, the war in Iraq has affected people everywhere.

Featured artist Cecelia Kane’s Hand to Hand project chronicles the events of the Iraq war since its inception in March 2003, when she began painting the day’s headlines on stuffed white gloves, one for every day the war continued. She describes each glove as a “’rosary bead’ in this on-going, meditation of war witnessing.” Some express our collective horror at the violence and some depict positive outcomes such as an AP photo of a Muslim woman joyously displaying an inked fingertip after voting in a democratic election: all reflect the role of journalism in mediating our reception of the historical events.

In January 2006 the artist decided to expand the project to include other artists--she invited each artist to take on one week of Iraq War news and depict each day’s news—good or bad—on a glove or hand-related artwork. 201 artists—many well-known Atlanta artists--will have contributed to the project by the end of the last week of August when Kane will end the vast project and mount the final weeks in the gallery before the exhibit closing. In its entirety, Hand to Hand will be large enough to fill every wall of ATHICA seven rows deep!

The artists hail from all across America and nine countries including a U.S. soldier stationed in Baghdad, another in the Gulf of Hormuz and two refugee Iraqi girls. There will be approximately 2,000 artworks ranging in media from a few video and sound works, to glass, photography, painted, printed, embroidered and sculptural hands. Written statements accompany the works, many of which commemorate the soldiers. A 300 page color catalog is being created to accompany the project’s penultimate showing, the printing of which is being funded by grants from The Elizabeth Firestone Graham Foundation and Idea Capital. As well as having shown a portion of the project at ATHICA in 2006 in the America on the Brink exhibition, Hand to Hand has exhibited at 13 venues from coast to coast since its inception.

Amply filling out the middle space of the gallery will be James Buonaccorsi’s Don't Forget to Learn, Don't Learn to Forget, a colossal 14-foot tall, 9-foot wide by 30’ long steel and cast iron sculpture. This beloved local, longtime sculpture professor at the Lamar Dodd School of Art has focused his entire career on meticulously crafted works relating to war; this work is his largest to date and will debut at ATHICA after more than four years in the making. It depicts a furnace filled with metal skulls resting at the end of a set of train tracks. Riding the tracks is a metal cart containing the horrifying results of the furnace’s activity. The skulls piled high in the cart are made even more sinister by the three-digit number branded on each forehead alluding to the cold statistics of warfare. Each furnace door has pithy phrases cast on them and the whole furnace topped by five ominous chimneys. Buonaccorsi‘s title alludes to the repetitive motion of history and man’s inability to learn from his mistakes. Buonaccorsi last showed at ATHICA in its second exhibit in 2002, Artists Respond to War, which was mounted when the US invaded Afghanistan.

Blaine Whisenhunt, also a sculpture professor, hails from Springfield, Montana where he teaches at Drury University. His audience-participatory work, Weapon of Mass Compassion is comprised of a paper shredder and a stack of over a 100 Xerox copies of images of civilian Iraqi’s, some war victims, culled from online sources, which he invites viewers to shred throughout the exhibit’s duration Whisenhunt explains that when viewers engage in shredding the images “they become complicit metaphorically in the atrocities taking place in the imagery.” This act provokes emotions of sympathy, sorrow, guilt, and accountability. However, when no one is in the act of shredding a large plume of shredded images will trail behind the shredder, which will be almost 12’ long once all the images have been shredded. At rest, the work reminds the viewer of the consequences of war’s dehumanization and the number of civilian lives lost during battle. Whisenhunt has shown other works previously at ATHICA in the 2006 America on the Brink exhibition.

The exhibit and a series of affiliated events will provide a stimulating and informative space for Northeast Georgians to reflect on the long Iraq War and the impact of war in general.

Curator's Biography
Lizzie Zucker Saltz exhibited nationally as a sculpture and installation artist for a decade. She is the Artistic Director of ATHICA: Athens Institute for Contemporary Art, Inc., which opened its doors in 2002. She founded ATHICA after familiarizing herself with the local art scene, writing art reviews and features for Flagpole Magazine from 1998 to 2000. She has also written for the international, non-profit Art Papers Magazine, publishing reviews and new stories intensively from 1998 to 2003, with two feature articles published in 2005. As a freelance curator she has developed exhibits for the Athens area since 2000, such as Rock Art: An Exhibit Of Visual Art by Athens Musicians and Eclectic Electric: An Exhibit Of Electronic And Digital Art, both held at the Lyndon House Art Center. She curated many of the exhibits at ATHICA and serves as Senior Curator on all. She received her MFA from San Jose State University in 1993. Shortly after she moved to Athens, GA with her spouse, David Z. Saltz--currently the chair of the UGA Dept. of Theatre & Film Dept.--they collaborated on several large-scale New Media projects, which exhibited at the Georgia Museum of Art (2000), The Sweeney Gallery in Riverside in CA (2002), Presbyterian College in SC and the Detroit MONA in 2003. They have two children.

Assistant Curator's Biography
Katherine Holmes graduated from Mississippi State University in 2008 with a BFA in Photography. Her most recent body of work, Nocturne: A Domestic Perspective, is in the PIEA International Traveling Photo Exhibition touring major conventions, schools, colleges and museums for three years in the United States, United Kingdom, Australia, South Africa and Canada. She moved to Athens in late 2009, where after an internship with ATHICA in 2010, she continued on to fill the position of Volunteer Coordinator and was recently appointed to the board. Holmes is engaged to be married to Mike Hodges a veteran of both the Iraq & Afghanistan Wars, who recently returned from a one-year tour of duty in Iraq.